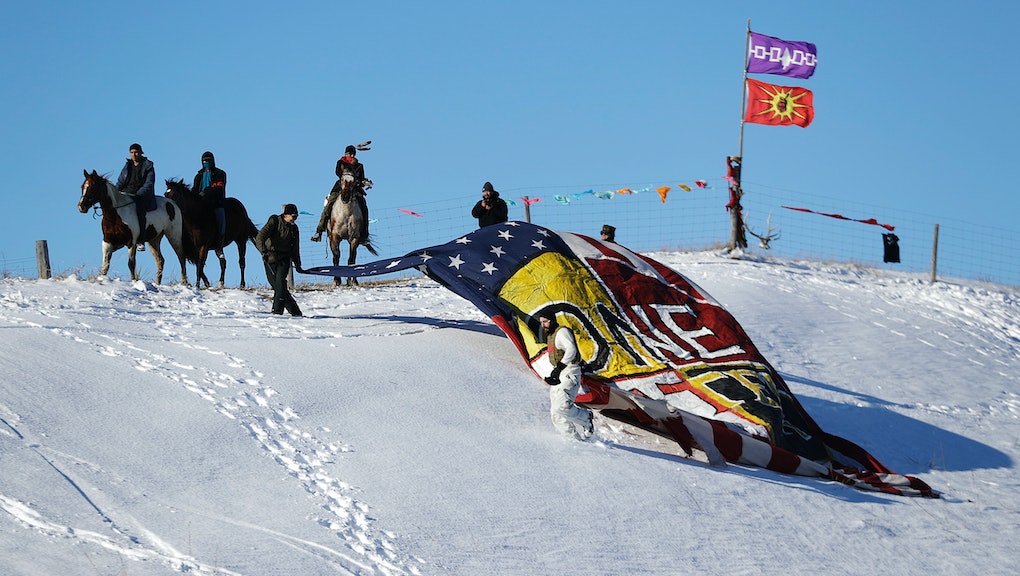 The United States' most notorious oil project is continuing to prove its detractors correct. On Tuesday, the Associated Press reported that the Dakota Access pipeline has already leaked on two more occasions in 2017 — bringing the total number to three since President Donald Trump ordered the project to be completed in January.

On March 3, 84 gallons spilled from a leak in Watford City, North Dakota, where two sections of the pipeline connect. Oil flow was "immediately" cut off to contain the spill, and contaminated snow and soil were removed without any damage being done to local wildlife or waterways, AP reports.

A smaller leak of 20 gallons occurred two days later, on March 5. The second leak happened in rural Mercer County, North Dakota, the result of an above-ground valve malfunction. The two leaks preceded the most widely-known incident to date, which occurred April 4 at a pump station north of Crandon, South Dakota. The April leak spilled 84 gallons of oil before officials contained it, again with no damage being done to the local environment.

None of these spills were large enough to warrant categorization as "significant" pipeline incidents by the Pipeline and Hazardous Materials Safety Administration, which requires spills of at least five barrels — or 210 gallons — to be counted in that category. But they go a long way toward validating the concerns expressed by local indigenous tribes and their allies over the past year.

Between April and December 2016, several thousand protesters — led by members of the Standing Rock Sioux tribe — converged on Cannon Ball, North Dakota, to halt construction on the Dakota Access pipeline. Demonstrators objected to the dangers posed by a section that was slated to burrow under Lake Oahe, a section of the Missouri River, from which the Standing Rock tribe draws drinking water.

Protesters argued that the oil could spill and endanger the water. Energy Transfer Partners — the Dallas-based company responsible for building the pipeline — insisted that everything was safe. No spills have been reported in the Lake Oahe section of the pipeline, but with three spills occurring elsewhere before the pipeline is even fully operational, it has been an inauspicious beginning so far.

Nevertheless, Trump has remained a staunch supporter of the project. Under former President Barack Obama's U.S. Army Corps of Engineers, construction of the pipeline was halted in December 2016 pending an environmental impact statement that would have assessed how great a danger the project posed to locals. Trump scrapped the delay as soon as he took office. In an executive action, he ordered the project to continue as planned, effective immediately.

Trump owned stock in Energy Transfer Partners — the company building the pipeline — before he reportedly sold them all off in the summer of 2016. The Dakota Access pipeline runs 1,172 miles through North Dakota, South Dakota, Iowa and Illinois.