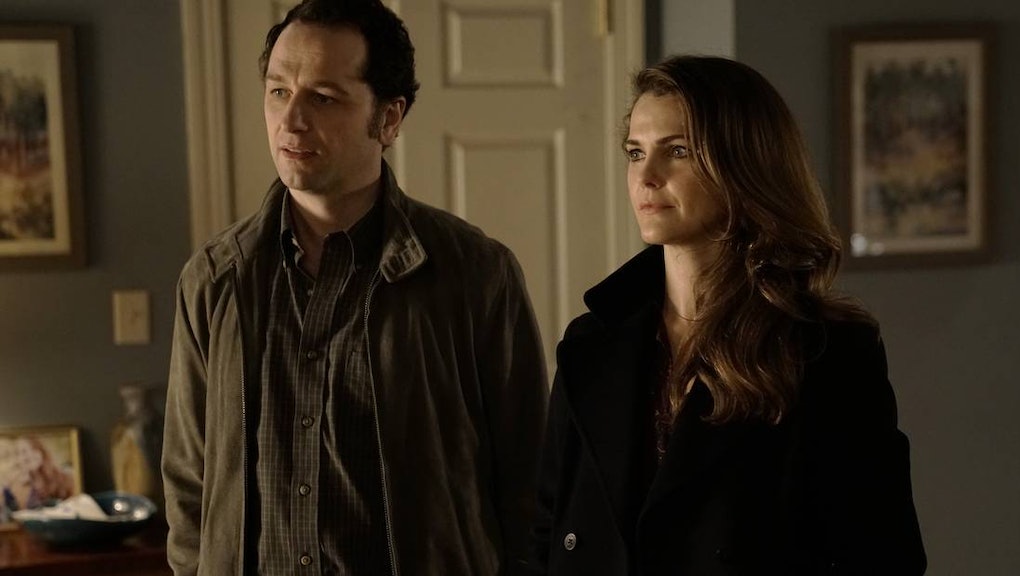 'The Americans' Season 5, Episode 12 Recap: Should the Jennings stay or should they go?

Whenever a TV series has an end date set, it's easy to start wondering early on how the show will ultimately wrap up. In the case of The Americans, viewers have been putting the pieces together ever since 2016, when it was announced the Cold War drama would conclude in 2018 with its sixth and final season.

Now that we're a week away from the season five finale, which will likely set things up for next year's abbreviated, 10-episode run, it seems a good a time as any to take an inventory of where several of the show's main threads stand. Considering The Americans features narratives that both span the globe and disappear for episodes at a time, sometimes the only way to make sense of everything that's going on is to stop for an update.

So, here's what's up with our favorite Russian spies, as well as their friends and foes, after Tuesday's season-five penultimate episode, titled "The World Council of Churches":

Elizabeth wasn't kidding at the end of last week's episode — it looks like there's a very good chance she and Philip will return to the Soviet Union. The entire episode saw the Jennings weighing their options, even going so far as to seek advice from the unlikeliest of sources, Pastor Freakin' Tim. At some moments, both seemed giddy at the prospect, talking about how they would drop the "Jennings" and resume using Philip's Russian surname. But there were other times when the KGB spies are reminded they've spent nearly 20 years as Philip and Elizabeth Jennings, and it may not be so easy to revert back to their old identities. Case in point: Paige asks her parents if they think of their American names as their real names. Both realize the answer to that question is a resounding "yes."

But before Philip and Elizabeth can answer the age-old question, "Should we stay or should we go?" they still have to deal with their ongoing Morozov family mission, which has reached a major snag. Tuan's plan to get Pasha bullied to the point that Evgheniya will take him home to Russia isn't working: Pasha is coming home with black eyes, but Alexei isn't budging, and Evgheniya refuses to leave without her husband. Reminder: The Jennings are trying to get Evgheniya to go back to the USSR so she and her Moscow-bound CIA-employed lover can be blackmailed by the KGB.

So, when Elizabeth tells Tuan "we need to rethink this," the reckless Vietnamese spy interprets it as an excuse to go completely rogue. Shortly afterward, he announces to Philip and Elizabeth that he's taught Pasha how to slit his wrists — without hitting an artery, he proudly adds. In the eyes of this little bugger, it's a win-win plan. Either Pasha will survive and his parents will be so freaked out they'll have no choice but to bring him home — or he'll die and the Morozovs, at least Evgheniya, will be so grief-stricken they'll leave the U.S.

I am so ready for The Americans to give Tuan the This is Spinal Tap exploding drummer treatment, because he's a cocky piece of shit who has no respect for human life. Though I can't hate him entirely — dude was wearing a Knight Rider T-shirt this episode. At least Elizabeth, who up until now has been able to kill people without regret, never did so unless it was absolutely necessary. The looks of sheer horror on Philip and Elizabeth's face as Tuan refuses to call Pasha and stop him from potentially killing himself just goes to show they haven't lost their humanity. Sadly, it's too late for Tuan.

When no one answers the phone at the Morozovs', a panicked Philip, whom we know full well will not be able to endure the death of another innocent victim, immediately makes a beeline for their neighbors' house. Elizabeth and Tuan follow behind, instantly switching gears from terrified spies to just a family taking a leisurely evening walk — because Tuan knows there's a surveillance car outside the Morozov house.

The episode ends on a cliffhanger, with Philip, Elizabeth and Tuan walking calmly yet briskly toward the unknown, leaving our hearts racing in their wake.

Well, it worked. The KGB has managed to get Pastor Tim a cushy job offer in Buenos Aires working for the, you guessed it, World Council of Churches, and Tim is none the wiser. Paige, on the other hand, is both impressed and freaked out, which especially shows in the way the camera lingers on her face as Tim gushes about how excited he is to return to South America, and she realizes she had a direct hand in this development. The photos she took of Tim's diary included passages about the time he spent in South America after college, which helped the KGB determine this tempting placement.

But as much as Paige would like to toss her cross necklace into the trash and be done with her longtime mentor, she's stopped by her parents, who remind their junior spy that until Tim and his family have left the country, she must continue playing the part of dutiful churchgoer.

After everything Paige has been through, it's not surprising she wants to dump her faith. But the moment where she drops her necklace into the garbage is still jarring to watch, considering she's been so devoted to her newfound religion since season two. However, this gesture is one of a few big signals in the episode that suggest Paige's turmoil over her loyalties to her parents and to her life as an American is diminishing. Not only that, but she's getting closer to choosing her side. In addition to asking Philip and Elizabeth about the origin of their names — they confide that their covers are the names of deceased American citizens — Paige announces to her parents that she's been able to sleep through the night again. She also closes out the episode by practicing her self-defense skills alone in the garage, sparring with a giant laundry bag full of clothes. It's a stunning image: Paige is the next generation, preparing to take over for her burned-out parents.

Poor Oleg. Unless you're Martha, relegating someone back to the Soviet Union has pretty much been a death sentence, both figuratively and literally — RIP, Nina — for all the major characters so far on The Americans. As I've mentioned in previous recaps, my curiosity toward Oleg's storyline has all but disappeared, but since he's still alive and in Moscow, his narrative deserves the courtesy of an update. The only real interesting element of note at this point is it appears the theory that Oleg and Philip could be half-brothers has been debunked by Oleg's mother, Yelena. In as few words possible, Yelena confesses to her son that she slept with a doctor during her internment in a Soviet prison camp in exchange for basic necessities. This all but confirms Oleg is not the biological son of his father, Igor, as well as puts the kibosh on the idea that Philip's prison-guard father impregnated Yelena.

Also, in what appears to be the setup for the KGB officer's narrative for season six, a heart-to-heart with Igor hints that Oleg, disillusioned with the widespread corruption within the Soviet government, is considering a big change. What that is, we don't know. Defecting back to the U.S.? Working as a double agent for the FBI or CIA? His riverside pondering offers zero answers.

The saga of Philip's long-lost son has not ended with his return to the Soviet Union, though it's clear now that this thread, which in essence started back in the season four finale, is going to stretch into next season. Tuesday's episode showed Mischa is now working in a factory in Moscow, and he's been discovered by his uncle, introduced as "Mischa's brother." Philip's real name, as we know, is Mikhail, aka "Mischa."

We don't get much else other than a cozy family meal between Mischa, his uncle, his uncle's wife and his little cousin, but you get the sense that if the Jennings follow through on their plan to come home, perhaps this will be how Philip and Mischa finally meet. But then again, who knows? This narrative has plodded along a bit too slowly for my taste, so it's been hard to remain interested.

The slow-burn storyline of FBI agents Stan Beeman and Dennis Aderholt working TASS news agency employee Sofia Kovalenko has been, to put it mildly, frustrating. However, Tuesday's episode finally introduced an intriguing wrinkle to the story and some of the best WTF? faces The Americans has ever produced, courtesy of alter egos Noah Emmerich and Brandon J. Dirden. In short, Sofia shows up to the designated meeting place with her new boyfriend and Soviet courie), hockey player Gennadi Bystrov. And guess what? They're getting married, and she told Gennadi everything she's been up to with her two FBI pals. So it's a great time for Gennadi to attempt a little extortion, "suggesting" the FBI raise the amount of money they've been paying Sofia for her intel. As with many of these storylines, I'm not sure where this is going, but there's no doubt my interest is piqued. Hats off to The Americans  showrunners, Joe Weisberg and Joel Fields, who penned this episode. They know how to bring back a skeptical viewer at just the right moment.