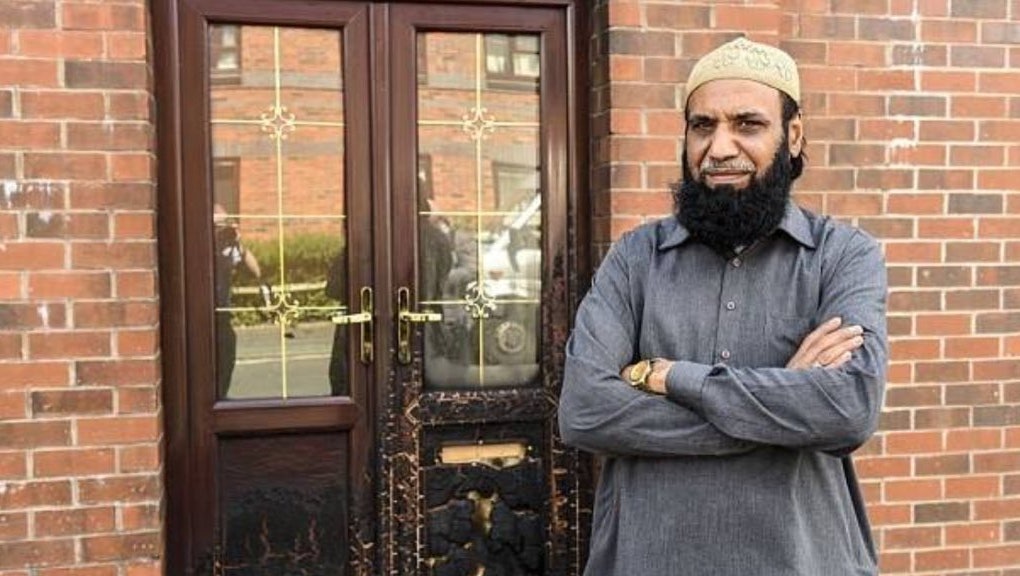 Several hours after a detonated bomb killed at least 22 people at an Ariana Grande concert in Manchester, England, a mosque nearby was reportedly set ablaze, according to the Independent.

An unidentified person or persons set fire to the door of the Jamia Qasmia Zahidia Islamic Center in Oldham, a town roughly 7 miles from Manchester. A police spokeswoman told the Independent that authorities received a phone call reporting an arson attack around 3 a.m. Tuesday morning. The spokeswoman also said there were no injuries from the fire and the incident is currently under investigation.

At Manchester's Victoria Park mosque — where imams across the area came together to pray for victims of the attack — an imam confirmed the fire took place and encouraged community members to remain vigilant, BuzzFeed U.K.'s Aisha Gani tweeted.

The police are looking into CCTV footage that shows a white man walking up to the door of the mosque. He was carrying a bottle of accelerant. Detective inspector Ian Harratt of Greater Manchester Police condemned the fire in a statement, the Telegraph reported.

"In the wake of the atrocities that happened at the Manchester Arena, this man thought it was acceptable to deface and set fire to a local mosque. This behaviour will not be tolerated. We are standing shoulder to shoulder with the community in Oldham and all the people who treasure this mosque as a place of worship. We have been working with people in the local community and the council to make sure that people realise there is zero tolerance around vindictive acts of this nature. If you recognise the man in the images, or the bike that he used, I'm urging you to please come forward because hate crime will not be tolerated at all in Greater Manchester. Stand up and be counted, you can make a difference in stopping acts like this happening again."

Debbie Abrahams, Labour MP for Oldham East and the Saddleworth constituency, also condemned the mosque fire and the Manchester bombing, according to Saddleworth News.

The mosque fire took place days just before the start of Ramadan, a period when Muslims fast and seek spiritual reflection. Muslim community members and leaders from all over the world, particularly in Manchester, have been providing support, conducting prayer vigils and condemning Monday's bombing.

Muslim taxi drivers were reportedly providing free rides home to concert attendees and victims of the bombing. They also gave out free water and provided phone charging stations to people at the scene. The Muslim Council of Britain, the Conservative Muslim Forum and the Manchester's Ramadhan Foundation all released statements condemning the attack.

"I love Manchester and its people — we are a resolute people and will not be divided by these barbaric animals or cowered by their violence," Mohammed Shafiq, chief executive of Ramadhan Foundation in Manchester, told the Independent. "We reject this barbaric terrorism, we commit to exposing the evil ideology of violence behind  it and stand together with our fellow Mancunians."