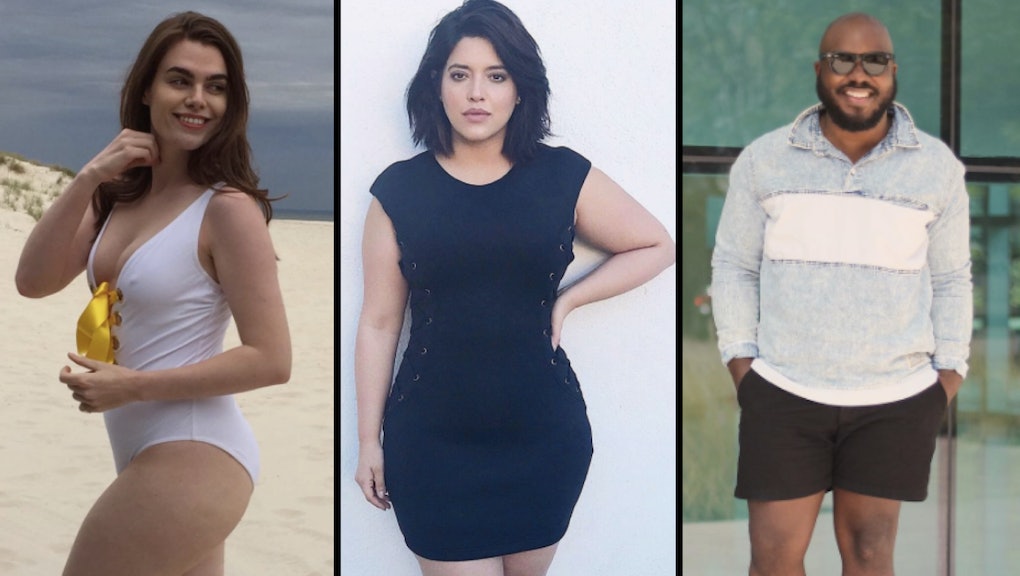 The first time curve model Charli Howard ever heard about the concept of "body positivity" was back in 2015, after she wrote a scathing Facebook status about how she had just been dropped from her modeling agency for being too big.

"My mental and physical health is of more importance than a number on a scale, however much you wish to emphasize this," she wrote. "Until (and if) an agency wishes to represent me for myself, my body & the WOMAN I've become, give me a call. Until then, I'm off to Nandos."

With that, Howard received a flurry of what we'd now refer to as body-positive messages, unintentionally landing her right in the middle of the body-positive movement, which was just taking off with the rise of women like Ashley Graham and Robyn Lawley.

"Just because I'm a curve model," Howard, who is a size 6/8, said in an interview. "It doesn't mean I want to constantly shout about how I feel about my body. I think that it's important to love your body, but it doesn't always define you. It is getting to a point where being bigger doesn't have to be brought up."

It's not that body positivity is unimportant so much as that the conversation largely preaches to an already rapt choir, rather than evolving to draw in new members.

As model Denise Bidot said in an interview: "I think the body positive conversation is one that lives indefinitely not just through curvy women, but men too. It started as a conversation for us because we needed to stomp our feet and what it did is unite everyone. It's a conversation that's near and dear to my heart, but yeah, I think the conversation needs to progress into inclusivity and how we get more curvy women out there, rather than individual experiences with loving ourselves."

Indeed, there are many problems with how the body positivity conversation is presented now, according to these models. And for starters, it's mostly only plus-size and curve models who are asked about it.

"It suggests that only bigger women or bigger models have faced criticisms about their bodies," Howard said. "And what I can say is that is absolutely untrue. When I was a size 2, I felt awful about my body."

And it's not like thinner models don't have anything to say about it, either. Model Clémentine Desseaux, who's been modeling for eight years now, claims she knows they do, but they simply aren't asked about it because the media doesn't think they are included in this movement at all.

"There's many girls I even know in the straight-size industry that are into body positivity, but they really never are asked about it because they're not different," Desseaux said. "It's like when you're not black, so you don't get asked about Black Lives Matter. There's this assumption that if you're not in this group you don't care, which is ridiculous."

For Desseaux, she claims that her interviews are too often only about body positivity, when she would be happy to talk about things like beauty and even, hey, the French elections.

In terms of why these models think they're the only ones asked about body positivity, Bidot, who has launched a body-positive project of her own, "No Wrong Way," said that it goes back to this idea that women who are above a certain size are inherently unhappy with their appearance.

"I think it's unbelievable to them that we can feel beautiful and confident," Bidot said. "I was meant to be curvy, I didn't think anything of it. For some people, it shocks them that you can be confident. People are still like, how can you be confident?"

Another issue now is that there's actually an expectation that plus-size and curve models want to talk about body positivity constantly.

"I think that on the whole, for a lot of these curve models, they're lumbered with that tag," Howard said. "It's like we have to love our bodies and show off our cellulite and stuff. And actually, it's like, do we have to do that? You don't have to always bring attention to your body and loving it, you could just love it."

That, in turn, has made several models feel like they're being used in campaigns as a "token plus-size model" in order for a brand to promote this idea that it loves diversity.

"That's definitely how I felt about Aerie Man," Kelvin Davis — who runs the blog Notoriously Dapper, has modeled for Chubbies and was involved in that #AerieMan April Fool's Joke — said in an interview. "They tapped into me because they were like, we need one body-positive dude who's active in this stuff. Sometimes a company will use you in the right way in order to help gain a better understanding of the movement and help other people. But there are some people that just jump on the wagon just because it's hot."

An example of this would be Urban Outfitters using curve and plus-size models when they don't even stock plus-size clothing.

Yet another issue: The conversation remains too broad. For Desseaux, if it focused in more on certain aspects of self-love and appreciation, then it could be a stronger movement.

So, in what ways can the conversation evolve? Among the models interviewed, one thing they all agreed on was a need for more diversity within the movement.

"I think inclusion is the most important thing, as we still see very minimal diversity in race and size and age in the runway shows or in commercials," Bidot said. "As a half-Latina, half-Middle Eastern woman, I see the representation on the Latin side but on the Middle Eastern side, there aren't a lot of us. I hope these doors continue to open for women of different sizes. We don't all need to have this hourglass body. I think we're just tiptoeing into that."

"We do have a lot of curvy models and plus-size curve models, but they're all one race and they all look one way," Davis added. "They're white or fair-skinned and there's more to see. We need to see women who have a bigger stomach and thighs and not just hourglasses. We have to do that for the movement to go forward."

Howard thinks that it's time for campaigns and runway shows to stop publicizing their diversity, because of this need for plus-size and curve bodies to seem normal rather than "the other."

"The only way to normalize it is to incorporate more bodies into campaigns, and not boast or really draw attention to that," Howard said.

In the end, it's all about feeling a part of the fashion industry for these models, and not apart from it.

"Yes, we're curvy, we're powerful," Bidot said. "We needed to let you know it, but now we said it and now it's time to do what we can and use those tools of feeling beautiful and be the best that we're able to be, whatever career path you choose. I want to create the next generation of doctors and lawyers that feel great about their bodies."