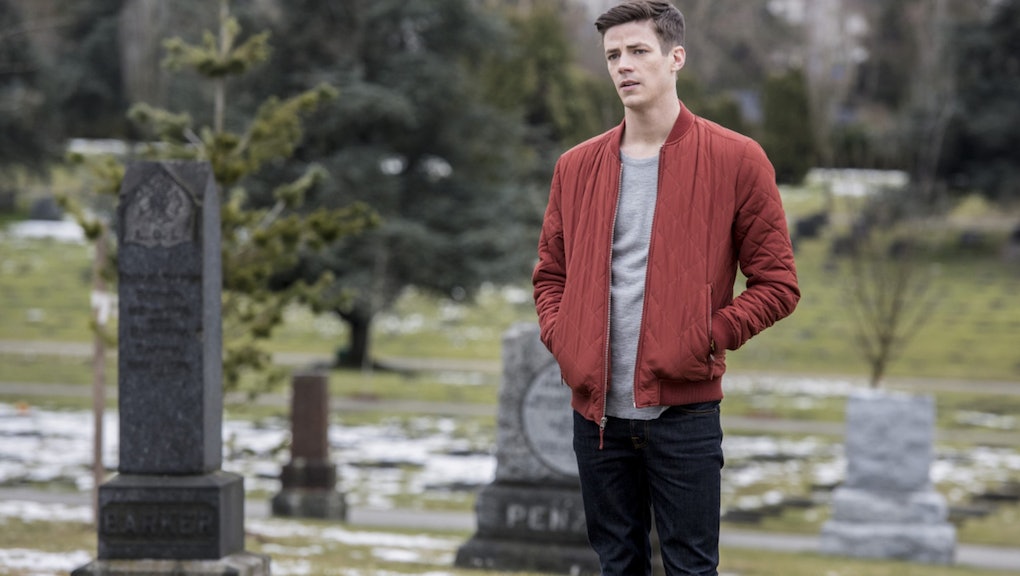 Is Grant Gustin leaving 'The Flash'? This is what we know about Barry Allen in season 4

[Editor's Note: Spoilers ahead for the season three finale of The Flash.]

Season three of The Flash has come to an end, and as has been teased for months, Barry Allen's decision to create the Flashpoint timeline has far-reaching consequences for our hero. In the final moments of the season finale, appropriately titled "Finish Line," Barry agrees to enter the Speed Force as penance for meddling with time. And this leads to what may seem like an incredibly unexpected question: Will The Flash no longer feature Barry Allen?

The short answer is: No. Of course Grant Gustin is not leaving The Flash, and season four will obviously feature Barry Allen in some capacity. When the CW announced its 2017-2018 television schedule, the press release contained synopses for all the network's returning shows, including The Flash. And Grant Gustin is clearly listed as a series star. This is not too surprising, as Gustin is the face of the CW's number one series.

So, take a moment and breathe a sigh of relief, because Barry Allen will be back. Still, it is quite possible, even likely, that season four will begin with Wally West carrying on the Flash mantle — perhaps even in Barry's scarlet suit. And this isn't some outside-the-box thought: There is precedent for it. In fact, there is a complete generation of comic fans that know Wally West, not Barry Allen, as the Flash.

In DC Comics' 1985 company-wide crossover, Crisis on Infinite Earths, Barry Allen supposedly dies trying to prevent the collapse of the Multiverse. While The Flash has not adapted this storyline directly (at least not yet), it has been teased since the first appearance of Eobard Thawne's future newspaper in season one. For those that forget, the title of that newspaper reads, "Flash Missing: Vanishes in Crisis." The paper, which is from 2024, certainly appears to be teasing a Crisis adaptation of sorts.

With the creation of Flashpoint, and Savitar being erased from history, it is possible that Barry's disappearance into the Speed Force in the season three finale is actually what should have happened in 2024 — what was teased in the paper. It would not be the first time that events on Earth-1 occurred earlier than expected. In season one, thanks to Eobard Thawne's interference, the particle accelerator exploded years before it was supposed to.

This brings us to Wally West. In the comics, following Barry's supposed death in the Crisis on Infinite Earths crossover, Wally takes on the mantle of the Flash and operates as the Scarlet Speedster for over two decades. And he did quite a good job. In fact, there is an argument to be made that he is the greatest Flash of all time, surpassing both Barry Allen and Jay Garrick. So, if The Flash is loosely (with heavy emphasis on loosely) adapting the Crisis storyline, it would make sense for season four to begin with Wally as the Flash. But that doesn't mean it will stick.

What does this mean for season four?

In the 2008 crossover, Final Crisis, Barry Allen makes his full-time return to the DC Comics Universe. It is pretty safe to assume that fans of The Flash will not have to wait 23 years to see Barry return to the series. Rather, it is quite likely that we will see him as soon as the season four premiere, though it is possible this will be from inside the Speed Force. But much like The Flash sped up the Flashpoint story to one episode, expect Barry's return to be expedited as well.

How Barry will return is entirely unclear. After all, he had to enter the Speed Force because of the void left by Savitar's death and Jay Garrick's escape. It would thus appear that a speedster would have to take Barry's place for him to ever be allowed to leave. But honestly, all it takes is a few lines of dialogue to explain Barry's return. And in the series, the Speed Force has let Barry leave on more than one occasion after teaching him one lesson or another.

It is likely that Team Flash will need Barry's help at some point. No matter how capable Wally is, he will probably be tripped up at some point due to lack of experience. Perhaps, when season four's big bad arrives — at this point largely assumed to be Clifford DeVoe — Wally will be in over his head and require assistance. Don't be surprised if this is when Barry makes his triumphant return. Of course, this is all conjecture. We will not know for sure how Barry escapes the Speed Force until the series returns in the fall.