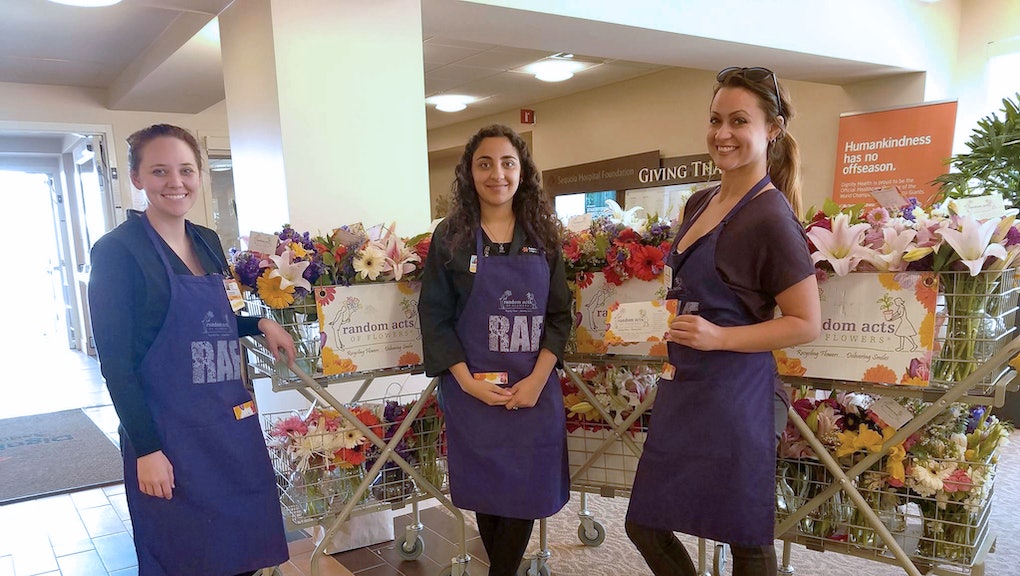 Here's how volunteering can impact your health

Let's face it, no one wants to be in the hospital, whether you're a patient or even a visitor. That's why the staff at Dignity Health Sequoia Hospital in Redwood City, California, ensures that one of the first interactions you have is with a friendly volunteer — like Adrian Hollifield.

Since September, the 21-year-old college junior and biology major has spent his afternoons at the hospital. On a typical day, Hollifield and fellow volunteers like Vianey Alarcon, 24, will help a visitor find the perfect bouquet at the gift shop, guide a lost person to their loved ones or stop by patients' rooms to offer some friendly conversation and companionship.

These small acts of kindness help patients and their families in the healing process and play an integral part in Sequoia's health care philosophy.

"The help that volunteers offer, it may not seem much to you, but the people who come in here are frustrated and anxious," Marianne Jones, the hospital's director of volunteer services, said. "Volunteers fill in those gaps and make the way easier to navigate."

Jones called Sequoia an "intergenerational meeting ground," where diverse pathways intersect over the desire to help and connect with others. It's this commitment to building a sense of community that's been at the heart of Sequoia — and the Dignity Health organization as a whole — from its very foundation.

Like the first Dignity Health hospital established in the late 19th century, Sequoia was built in 1950 as a result of grassroots efforts: A group of nine women appealed to the Redwood City city council to create a health care system that served the needs of everyone in the community. And those origins have shaped Dignity Health's fundamental belief in the healing power of human-led compassion.

Volunteering and the brain

The hospital group also understands that patients aren't the only beneficiaries of the healing power of compassionate care. Research suggests volunteers themselves experience positive physiological benefits. Just thinking about helping others lights up the mesolimbic pathway in the brain — which is associated with rewards — flooding it with feel-good happiness chemicals. Those who volunteer regularly also tend to have lower levels of the stress hormone cortisol, which can be dangerous to one's health when elevated.

In fact, a 2012 study analyzing 3,376 volunteers from the Wisconsin Longitudinal Study found the risk of mortality decreased by about four years among people who donated their time to help others or contribute to a cause important to someone they care about. It didn't matter how long they volunteered, so long as the motivation and compassion were genuine.

"We’re designed by evolution to be caretakers," Stephanie Brown, associate professor of psychiatry and psychology at Stony Brook University School of Medicine in New York and one of the study's authors, said in an interview. "We have brains that are wired for this."

This caretaking instinct, Brown said, is what enables people to care for others who aren't related to them. And at Sequoia, Jones has seen the positive impact that exercising this instinct can have — on the student volunteers in particular.

"Time slows down for our students, who are going at 1,000 miles an hour,” she said. Jones noted that once they begin interacting with patients, talking and listening to their stories, the young volunteers open themselves to moments of greater mindfulness.

The experience has also reaffirmed some students' decisions to pursue careers in medicine. Alarcon was already inspired to become a radiologist more than a decade ago, after her brother broke his arm in a horseback riding accident. But after volunteering in Sequoia's diagnostic clinic, helping women prepare for mammograms, Alarcon said she fell in love with the prospect of joining the fight for breast cancer prevention. She's now studying to become a radiologic technologist.

Volunteering at Sequoia has also further fueled Hollifield's drive to become an orthopedic surgeon. He said his memorable time at the hospital has influenced his overall understanding of patient care.

"You just have to make it as simple and as positive an experience as you can," Hollifield said. "That's what really caught my attention." Through his experiences and advocacy, he discovered the core of health care simply lies within providing comfort. Whether lending a hand, an ear or a smile, healing can come from being in the moment — entirely present alongside someone who needs your care.