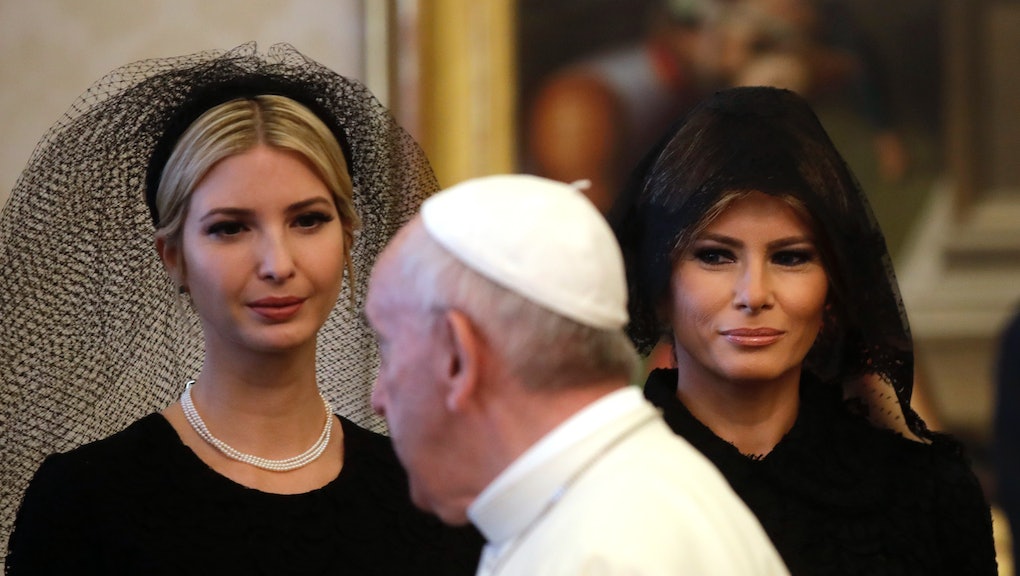 First lady Melania Trump and first daughter Ivanka Trump joined a long line of female western leaders when they donned conservative black dresses and mantillas, a traditional scarf worn over a woman's hair, for their visit to the Vatican and meeting with Pope Francis on Tuesday evening.

Journalists and social media users quickly went to point out a perceived double standard Ivanka and Melania were perpetuating in their foreign trips: The Trump women — both refusing to wear the headscarf — supposedly disrespected Islamic tradition to make a political statement about Saudi Arabia's institutional misogyny, but chose to respect Catholic customs and wear head coverings at the Vatican.

But the comparison is a bit apples-to-oranges, considering that the Trumps were meeting with religious leaders at the Vatican — a holy site — whereas in Riyadh, they were meeting the kingdom's royal family at their palace.

However, the Trump women's visit to the Vatican does reveal another double standard: Many of the European countries that banned burqas and niqabs in the name of secularism and liberating Muslim women have historically tolerated — and sometimes enforced — the Catholic Church's order for women to cover their hair.

It was only in 1983 that the Catholic Church eased its strict dress code for women. In addition to stating that women and men were to be segregated during mass, the 1917 Code of Cannon — a set of laws ordained by the Catholic Church — required women to cover their hair when attending mass. Men, on the other hand, were allowed to be bare-headed:

Men, in a church or outside a church, while they are assisting at sacred rites, shall be bare-headed, unless the approved mores of the people or peculiar circumstances of things determine otherwise; women, however, shall have a covered head and be modestly dressed, especially when they approach the table of the Lord.

The mandate for women to wear veils or hats in church was in effect for over six decades until Pope John Paul II, under the Second Vatican Council, promoted the revised Code of Canon in 1983.

While women are no longer required to wear the veil in Church, it still represents an element of misogyny for some Catholic women. Some theologians, like Aurora University professor Heidi Schlumpf, said the basis behind the mandated veil covering is emblematic of a "thinly veiled patriarchy" and is rooted in the church's (mis)interpretation of Saint Paul's words in the New Testament's 1 Cornithians 11. "Some mistakenly believe Paul is saying that 'any woman who prays or prophesies with her head unveiled' is the same as a prostitute ('having her head shaved')," Schlumpf wrote in the National Catholic Reporter.

But despite the Catholic veil's association with patriarchy and misogyny, European countries, like France, have accepted it as a part of Western customs and traditions. However, Islamic headcoverings and veils for women, are often ostracized — at an institutional level —  as religious symbols at odds with European values and liberalism.

For example, German Chancellor Angela Merkel advocated for a burqa and niqab ban in December 2016, citing it didn't represent German values. "The full veil is not appropriate here, it should be forbidden wherever that is legally possible," Merkel said, according to CNN. "It does not belong to us." Similar comments are rarely ever directed at Catholic nuns and worshippers.

Within the past six years, Europe has seen a trend of full and partial bans of Islamic face veils since France implemented a full ban on burqas in 2011 to uphold laïcité, or secularism. In April, Germany passed a partial ban on burqas. The ban would prohibit Muslim women who work in the government, magistrate and the police force from wearing the burqa and niqab. And most recently, Austria passed legislation on May 16 to ban the burqa in public places and for Muslim women who also work in civil service.

The hijab, despite how similar its purpose is to the Catholic veil, is also often described by European politicians and pundits as a symbol at odds with their values. In March, when the European Union ruled that employers are allowed to discriminate Muslim employees for wearing the headscarf, Belgian Secretary of State for Poverty Reduction and Equal Opportunities Zuhal Demir backed the ruling. Demir's justification for the ban was that Muslim women should adhere to European values even by force. "Muslims should adopt our values," Demir said. "But [most] would not do it on their own initiative. Some require help or force." In March 2016, French Minister Laurence Rossignol compared Muslim women who choose to wear the hijab as "negroes who accepted slavery."

So, these statements leave behind a big question: If European politicians are willing to take a stand for secularism and against women's oppression, then why won't they address the ongoing tradition of donning the Catholic veil?