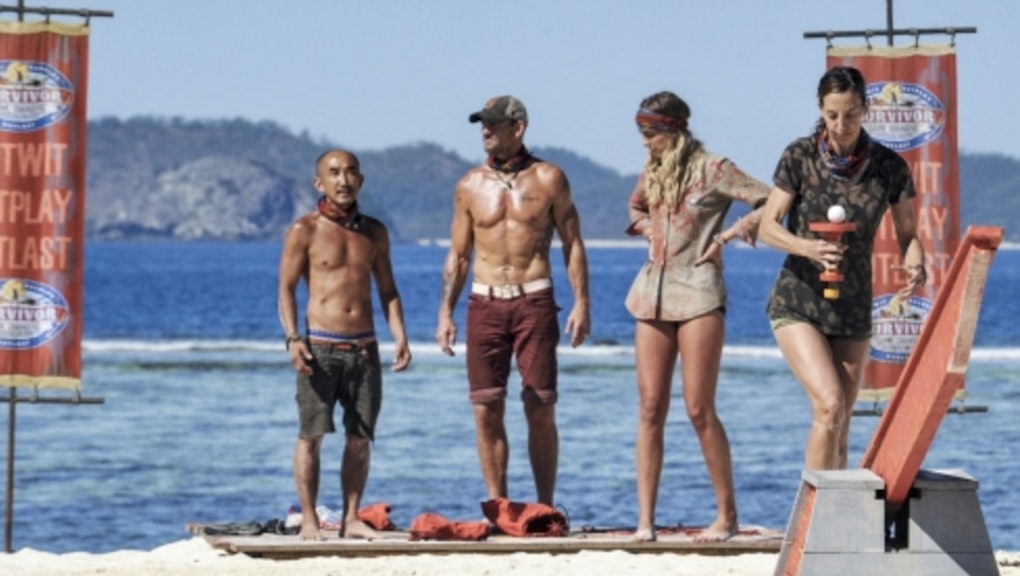 Thirty-nine days living, starving and surviving on an island will change you. After Survivor 33: Millennials vs. Gen X, I came off the island 22 pounds lighter, hair a-tangle and not trusting a soul.

A whole new batch of Survivor contestants return to civilization every season. They have to quickly adjust to society or be voted out of their hometown. That can happen — don't look it up.

So Survivor fans at home can get a better idea of what it's like returning home, I've collected a list of the nine most common things that happen to contestants when they leave the island. My research has been intense — it's been months of collecting data and making endless pie charts. Don't worry, you can trust my information.

Here's what happens to ex-island folk:

1. Brush their teeth with sticks

We mainly brush our teeth with bamboo on the island. It's a lot of scraping teeth with dirty sticks.  When contestants return home, resisting the urge to stick brush is almost impossible. Contestants often have to fight off dogs for sticks. Luckily, stick toothbrushes are dentist approved. Better than an electric toothbrush even!

2. Think all their friends have formed secret alliances

When playing Survivor, your friends are constantly out to get you. Every person you consider a confidant is trying to beat you in a game for a million dollars. Contestants often find themselves not trusting their buds when they return to their small town. The mailman is talking to your wife — are they forming a secret mail alliance? And why is grandma calling mom? They're related but they could also have found an idol.

3. Confess secrets into a camera that doesn't exist

When on the island you're expected to talk into a camera and spill all your secrets and shame. Contestants who return home are used to this outlet. Many former Survivor players can be seen telling their deepest thoughts into invisible cameras. If you pass a person telling a tree — "I think my sister never loved me" — that's probably a Survivor contestant.

4. Eat food like it's about to be taken away

Food on Survivor disappears. At camp, you fight for scraps and even reward wins have a time limit.

Fire on the island means life. Many Survivor contestants forget that fire doesn't mean life in the real world. Contestants will carry their torch with them everywhere — to CVS, to pick their son up from daycare and even to the gynecologist. Many a gynecologist has been burnt by a torch-carrying ex-island competitor. It's the number one cause of gynecologist deaths. Don't look that up.

Where do Survivor contestants use the bathroom on the island? Are their secretly porta-potties off camera? No! Everywhere is the bathroom. Island competitors return home and forget how to use, I believe it's called.... a toilet? If you find poop on your Welcome mat, in your bathtub or in your purse, it's probably a former Survivor contestant that doesn't know any better.

7. Vote out members of the family

Voting out those who disagree with you is a way of life on the Survivor island. Former contestants often think they can vote people out in their real life. One time a Survivor contestant got really annoyed with her daughter, Beth. The former contestant wrote "Beth" on a piece of paper she found in the kitchen —and no one saw young Beth ever again.

This one doesn't need an explanation. Former contestants often befriend coconuts: They talk to them, fall in love with them and yes, even betray them.

9. Think every handsome man they see is Jeff Probst

The thing I missed most when I left Fiji was Survivor's handsome, dimpled host. Yes, Jeff Probst is often seared into the hearts of Survivor contestants. When returning home, many contestants will longingly call any symmetrically faced man "Jeff." Their spouses no longer please them because the ghost of Jeff Probst haunts them. It's a living nightmare.

All these things happen to returning Survivor contestants. But don't judge them. They suffered on an island for your entertainment — and to feel the momentary, fading light of D-list celebrity fame.