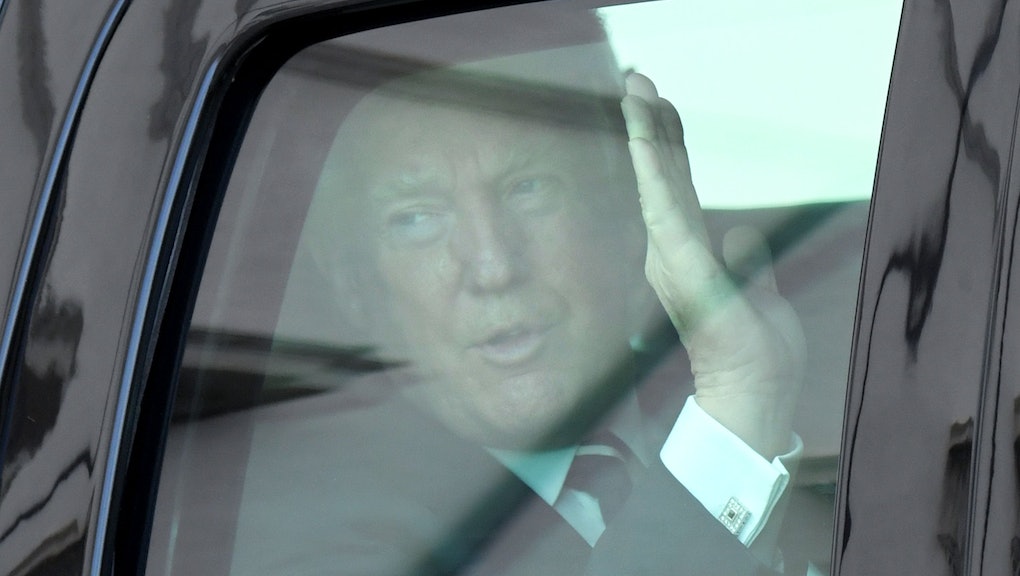 A watchdog group of former Obama White House lawyers is suing for details on how President Donald Trump reportedly asked top intelligence officials to push back against an FBI probe of his campaign's possible collusion with Russia.

"The investigation at issue goes to the heart of the integrity of our democracy. If the president is trying to enlist the intelligence community to shut down that investigation, the American people have a right to know," wrote Ian Bassin, executive director of the watchdog nonprofit and former associate White House counsel in the Obama administration, in a web post.

In April, Protect Democracy sent a Freedom of Information request to the NSA in search of documents related to any effort by Trump or his aides to interfere with the FBI investigation.

Then this week, the Washington Post reported that according to sources, "Trump made separate appeals to the director of national intelligence, Daniel Coats, and to Adm. Michael S. Rogers, the director of the National Security Agency, urging them to publicly deny the existence of any evidence of collusion during the 2016 election."

Post sources said "Trump's conversation with Rogers was documented contemporaneously in an internal memo written by a senior NSA official."

Protect Democracy's original April inquiry would have encompassed "any memos — like the one the Post identified — documenting White House requests for the NSA to intervene," Bassin wrote in his web post.

"Now, in light of the new revelations, we're taking that request to court."

The press offices of the White House and NSA did not immediately respond to requests for comment late Wednesday.

The specter of possible coordination between the Trump campaign and a Russian government intelligence officials say had clear motivation to interfere in the 2016 election has dogged the president and his top advisers, both past and present.

A week ago, the Justice Department announced the appointment of former FBI Director Robert Mueller as special counsel in charge of the investigation.

The president has said there was no collusion "between me and my campaign and the Russians" and that he has not tried to impede any investigations.

However, Trump fired FBI Director James Comey on May 9, saying in a dismissal letter that he wasn't capable of effectively leading the bureau. The president also pointedly thanked Comey for having said "on three separate occasions" that he wasn't personally the subject of the FBI investigation into Russian attempts to influence the 2016 election.

Soon afterward, Trump took to Twitter to personally warn Comey against talking to the press.

Bassin argued in his Wednesday post about the Protect Democracy lawsuit that since Trump himself "has commented extensively on his own account of his conversations related to the Russia investigation," there's no reason for the government to hold back any information from the public.

"Our democracy was founded and depends upon the principle that no man or woman is above the law and that the law applies equally to all," he wrote.

"If the president can stop an investigation because it's getting too close to him or his associates, there's no limit to his power."