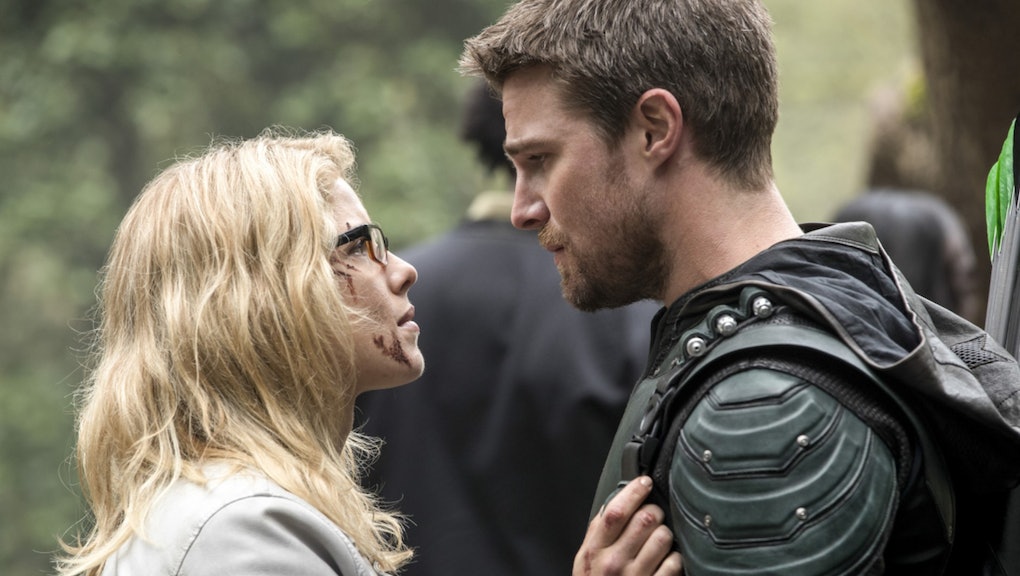 When does 'Arrow' return? Our season 6 synopsis and theories

(Editor's note: Spoilers for season five of Arrow ahead.)

Arrow wrapped up its fifth season Wednesday in explosive fashion. The season finale, titled "Lian Yu," brought Oliver Queen back to the eponymous island that he's gotten to know so well, where he teamed him up with fan favorite Deathstroke. But even with Deathstroke's help, Oliver learned that stopping Prometheus may not have ever been in the cards.

In the final battle with Prometheus, who has easily turned out to be Arrow's most chilling and sadistic villain yet, Oliver is forced to choose between his son, William, and the rest of his friends and family on Lian Yu. For a moment, it appeared Oliver found a way to save them all — but seconds after his son was rescued, Chase kills himself, activating hundreds or even thousands of bombs he had planted throughout the island.

Arrow's fifth season came to an end with Oliver and William alone on a boat, staring at an island gone up in flames. And that island was not empty: Thea, Felicity, John, Quentin Lance, Deathstroke, Black Siren, Black Canary, Nyssa al Ghul, Talia al Ghul, Evelyn Sharp, Wild Dog, Curtis and the mother of Oliver's son were all still on Lian Yu. Clearly, the season finale has left fans with quite a few questions, one of them being when can we see more?

When does Arrow return?

Before the explosion that potentially took out every main character besides Oliver Queen, "Lian Yu" actually seemed like a fitting series finale for Arrow. In general, the fifth season acted as a culmination of everything Oliver had experienced since his return to Star City — and with the action returning to the island where the series began, it really felt like the series had come full circle. But Arrow is obviously not ending on such a destructive cliffhanger.

Arrow, along with the rest of the CW's DC television shows, has been renewed for the 2017-2018 season, so we'll definitely see some kind of a resolution to season five's finale. While it's not entirely clear when Arrow's sixth season will begin, past debuts would seem to suggest it will be sometime in October. Since the series's inaugural season in 2012, each season of Arrow has premiered in the first or second week of October.

Who will be back?

We know Arrow will be returning for at least another season. But following season five's finale, we have no idea who will be joining Oliver in his ongoing crusade to rid Star City of crime. Clearly, he won't be alone. Even without looking to spoilers, it's fairly obvious all those people left on the island did not perish. While Arrow has killed off main characters in the past, it's extremely hard to believe the show would eliminate that many at once.

So, it's safe to assume that at the very least, John Diggle, Curtis Holt, Thea Queen and Felicity Smoak somehow survived the blast. It also stands to reason that Deathstroke survived, as his appearance seemed to set up his future storyline, including a search for his long-assumed-dead son. Thanks to spoilers and cast renewals, we can make even more informed guesses as to who survived Prometheus' final act. So, before we go on, be warned the remainder of this article will include some possible spoilers for season six.

OK, still here? Great. From cast announcements alone, we know Wild Dog, Black Canary and Black Siren survived the explosion. Not too long ago, it was revealed Rick Gonzalez, Juliana Harkavy and Katie Cassidy were all upgraded to series regulars for Arrow's sixth season. And sure, while it's possible they will appear entirely in flashbacks, that sounds a bit unlikely. Additionally, and not surprisingly, John Diggle, Felicity Smoak, Quentin Lance, Curtis Holt and Thea Queen are all listed in Arrow's sixth season synopsis — so expect them to return, too.

Did anyone die? Probably, but it isn't clear who, which is the point of cliffhangers. A shocking and emotional twist would be for the mother of Oliver's child to be the one who perished, forcing Oliver to raise a son while fighting crime.

It's not a stretch to assume the season will pick up shortly after Wednesday night's finale. If anything, what happened on the island could be shown in a flashback. Outside of that, next season's plot is anyone's guess. Unlike the recent season finales of Supergirl and The Flash, which each teased an upcoming villain — Reign and Clifford DeVoe, respectively — Arrow has not revealed with any certainty who Oliver and team will be going up against when the series returns, though we can guess who might be the main villain.

Arrow has never featured a main baddie who was not set up in some way by a prior season. Season two featured Slade Wilson as the main antagonist, after he had been an ally of Oliver's during his time on Lian Yu. Season three served up Ra's al Ghul, first mentioned — along with the League of Assassins — when Sara Lance returned the prior year. Season four's big bad was Damien Darhk, who was first discussed by Ra's.

Then, of course, Adrian Chase was this year's big bad. While he was never mentioned by name in prior years, we do see Oliver kill Chase's father in season one, in the event that "created" Prometheus' drive to destroy the Green Arrow. So unless Arrow goes in an entirely different direction, it's likely we're at least remotely familiar with season six's primary villain. The only person who comes to mind, though, is Cayden James, the mysterious leader of Helix. That is pure speculation at this point, but the Helix plot never felt like it came to a proper close.

While it doesn't reveal much — especially since it was released prior to the season finale — the CW has already posted the synopsis for Arrow's sixth season. You can check it out below:

After a violent shipwreck, billionaire playboy Oliver Queen was missing and presumed dead for five years before being discovered alive on a remote island in the North China Sea. He returned home to Star City, bent on righting the wrongs done by his family and fighting injustice. As the Green Arrow, he protects his city with the help of former soldier John Diggle, computer-science expert Felicity Smoak, his vigilante-trained sister Thea Queen, Deputy Mayor Quentin Lance, brilliant inventor Curtis Holt and his new recruits, street-savvy Rene Ramirez and meta-human Dinah Drake. Oliver has finally solidified and strengthened his crime-fighting team, only to have it threatened when unexpected enemies from his past return to Star City, forcing Oliver to rethink his relationship with each member of his "family."