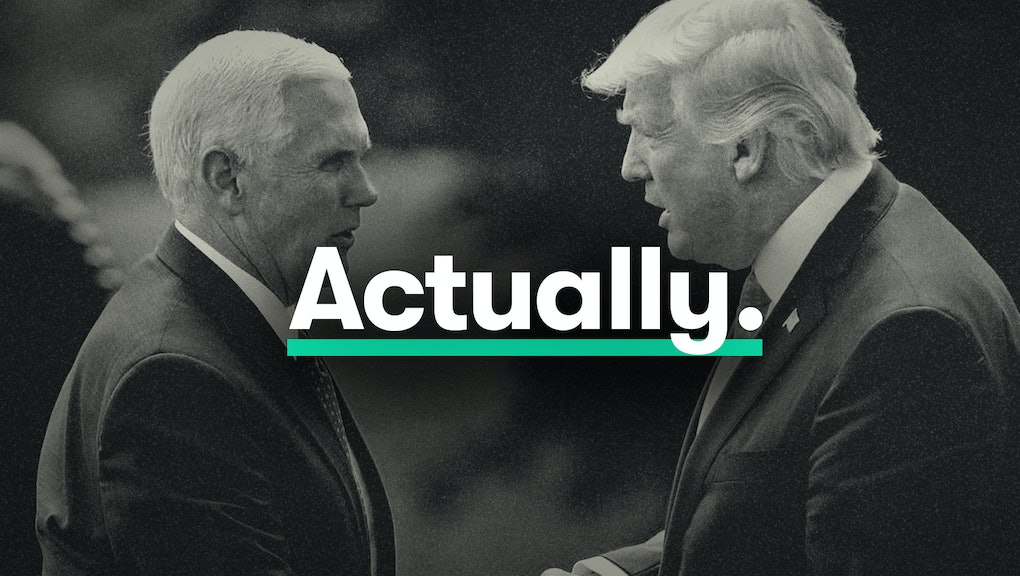 Debate: Would a President Pence be even worse for the left than President Trump has been?

In the wake of a spate of bombshell revelations concerning the FBI's ongoing investigation into possible collusion between members of President Donald Trump's campaign team and Russian officials, all that breathless Twitter chatter about impeachment no longer seems as far-fetched as it once did.

But if Trump is removed from office — or gets the chance to resign before things get that far — then Vice President Mike Pence will step in and become our next president. To some on the left, the thought of his presidency comes as a comfort: Pence, a mainstream conservative cut from the same cloth as so many others in his party, is the devil they know. To others on the left, Pence's reputation as a beacon of conservative competence represents the greater of the two evils.

Mic asked two writers to debate whether a potential President Pence is more threatening to the American left than President Trump. They each get three rounds of response, each round can be no longer than 200 words and all responses have to be to our moderator in no more than 30 minutes.

At the end of the debate, you'll get to vote on the winner. Please no voter fraud.

Allison Kilkenny is a writer, host of Citizen Radio, author of #NEWSFAIL and a progressive political commentator. G. Gordon Liddy once said her writing makes him "want to vomit."

David Klion is a former editor for Al Jazeera America and World Politics Review. He lives in Brooklyn, New York City, and has written for the Guardian, the New Republic, Gothamist, Alternet and other publications.

Kilkenny won the coin toss and will go first.

Allison Kilkenny: I know it's difficult to imagine living in a world that is worse than the current U.S. political hellscape, but I promise you President Pence would be a far scarier reality than our current Great Orange Leader.

Trump is an opportunist operating without a moral compass. You can tell by the way he sloppily tailors his speeches depending on the mood of whatever room he's addressing. And we've seen the amount of damage an opportunist, who is surrounded by zealots, can inflict upon the country. Now just imagine if a true zealot with laser-like focus on obliterating protections for marginalized communities was at the helm. That's the possibility of living in a country run by Pence.

We're talking about a vicious homophobe who caused an HIV outbreak in Indiana because of his insane vendetta against Planned Parenthood and whose solution was to "pray on it."

David Klion: I'll happily concede up front that Mike Pence is a right-wing fanatic whose policies are threatening to women, LGBT people and people of color. The only appropriate reaction to his potential presidency is one of dread.

However, impeaching or otherwise removing Donald Trump from office is still the best outcome for the left and for the country, even though it would result in a Pence presidency in the short term.

First of all, Pence is already the vice president and has played a key role in staffing the Trump administration and selecting its Cabinet and judicial nominees, as well as coordinating legislation with the Republican-controlled Congress. We are already living under a Pence administration in many ways, and we will be until at least January 2021, regardless of whether Trump is in office. There is unfortunately no way to avoid having a far-right executive branch in the near term; it can only be resisted. But there are major additional costs to having Trump in charge, on top of his standard-issue GOP policies.

Trump's manifest, unique unfitness for office is easy to dismiss as a source of morbid humor, but it carries real costs, some of which are still becoming apparent. Consider Monday's tragic suicide bombing in Manchester. Attacks like this are hard to prevent, but many have been foiled thanks to coordination between the U.S. and its close allies, including the U.K. But British authorities are now reconsidering the intelligence-sharing relationship with the U.S. This is just one example of the costs of the many unforced errors that Trump, and only Trump, commits on a regular basis.

While we tend to assume, perhaps for the sake of our mental health, that Trump has responsible advisers who will prevent him from doing anything truly scary, like deploy nuclear missiles, this is a huge bet to place on a man who lacks the intelligence or stability to make the right call when confronted with a serious national security crisis, which, fortunately, hasn't happened yet. Let's not push our luck.

In addition, impeachment would be inherently positive. Trump is clearly guilty of obstruction of justice, by his own admission, after firing the FBI director who was investigating his administration's alleged ties with Russia. He is also clearly profiting off the presidency on a massive scale in violation of the emoluments clause of the Constitution. If Trump is not impeached, it makes a mockery of the rule of law. Trump's presidency is the result of a series of failures of accountability among the political class, and impeaching Trump would be a necessary if insufficient first step toward reversing those failures.

(Editor's note: Trump has neither been charged nor convicted of any crime since taking office, and claims that he is guilty constitute analysis from the writers, not a reflection of official rulings from law enforcement.)

At the end of the day, we're stuck fighting Pence and the right-wing agenda of the Republican Party no matter what. But by impeaching Trump, we can remove the immediate threat posed by a dangerously unstable president, while at the same time reasserting checks and balances and delivering a major defeat to the Republicans.

(Editor's note: Though he respected the time constraint, Klion went over the word count for this round. Sad!)

AK: I want to be clear that I believe impeachment of Trump is necessary. He's clearly violated the law numerous times, and if impeachment isn't for this very moment, I'm not sure why it even exists as an option.

David is right to point out that Pence already has a hugely influential role in the Trump administration. Not only does he have his hands on the nominee processes, but you can be sure he's the driving force behind the targeting of Planned Parenthood clinics and a proposed budget that makes significant cuts to AIDS programs. And this is the damage he's doing on the periphery. Just imagine if he and Steve Bannon combined forces to pursue a narrow, targeted agenda.

Trump is a walking disaster, but Pence is more dangerous because he gives this whole terrible agenda and facade of respectability. When you watch Trump, you're aware you're watching a clown play at being a man, but many consider Pence to be the "grown up" in this administration, which is a terrifying prospect because he's a monster.

Ultimately, this is a choice between two awful choices, but my main fear is that Pence will bolster his evangelical support. They will feel emboldened as they did at the beginning of Trump's presidency. Now, Trump's hardcore base's enthusiasm is waning. I think they would come roaring back if they knew a True Believer was serving as president.

DK: Allison raises a valid concern that Pence will excite the Christian right, whose support for Trump has been more pragmatic. And she is correct that Pence's relative competence, contrasted with Trump's dysfunction, might make the GOP agenda more potent.

But no one elected Pence president, and given that his views are unpopular and that he lacks Trump's grotesque charisma, he'll start out weak. His party will be divided, since some of its members will have voted to remove Trump, who remains popular with the Republican base. There will be recriminations, and Pence will be pressured to pardon Trump for any crimes committed in office. When Gerald Ford pardoned Richard Nixon, it undermined his presidency and cost him reelection.

Meanwhile, Democrats and progressives will be emboldened. Grassroots political activism on the left has already surged since the election, and removing a hated president from office would be hugely encouraging. There is a risk that some centrist Democrats or mainstream media pundits will urge reconciliation and argue that Pence should be given a chance. But Pence is fully complicit in the Trump administration.

If the left can keep up the pressure, Pence's term will be mired in scandal and hopefully brief.

AK: I would argue that Trump/Pence were elected as a team, and a large part of the reason Trump (and Bannon) chose Pence is because of the cachet he carries in the extreme-right Christian community. I think he could very easily slide into a leadership position without any real challenge coming from the right. In fact, I believe a lot of conservatives would express relief that an "adult" is now in power. And then, if we extend this nightmarish prospect, let's assume he successfully closes even more Planned Parenthood clinics and slashes funding to HIV prevention (and whatever else is on his weird fanatical wish list); he would then enjoy that momentum moving into the next presidential election.

If we're assuming a Pence presidency would be more extreme in one aspect (repro choice), we have to assume it'll be extreme in other aspects as well. This extends to voter disenfranchisement and media suppression. Sadly, I think Pence could be more successful in squashing dissent as well. Especially if he plays up the narrative that we're a fractured nation post-impeachment and need to "come together" for the sake of the union. You just know the establishment media will eat that up too.

In closing, I believe Pence is a shrewder, more dangerous version of the extreme right. Trump wants to be adored by people. Pence thinks he's a messenger of God. I know which one I find more frightening.

DK: I agree with most of what Allison says regarding what Pence would try to do, and it's clear Pence was selected for this very reason: to cement Trump's alliance with the Republicans and to provide an insurance policy if Trump has to be removed. It is tragic that the Trump-Pence ticket defeated Hillary Clinton last November, and the terrible consequences are still only beginning to play out.

But the status quo is untenable. Trump is too unpredictable and destabilizing a figure, and not in a way that prevents the GOP from shutting down abortion clinics, passing voting restrictions, appointing extremist judges, deporting immigrants or, potentially, taking away health care from millions.

At least for the next 1,335 days, the left is going to have to fight back on all of these fronts and more. But that includes removing this absurd president from power, dividing his party, and pushing open-ended investigations that will confront Pence from day one. This isn't just the right thing to do, it will also hopefully distract the Republicans from executing their agenda.

Trump is a problem we can and must solve quickly. Unfortunately, Pence and the GOP are problems we'll be dealing with for years to come.

This concludes this week's Actually. Please take a moment to vote for the writer who you think made the more compelling argument. They will get all the Twitter glory.