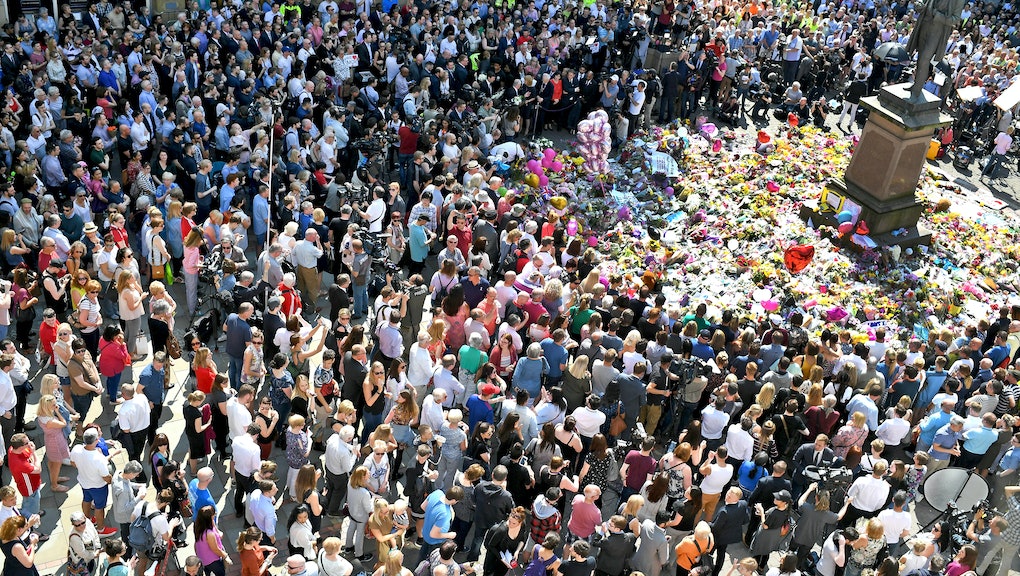 Concert security in the wake of Manchester Arena bombing: “We can’t keep you 100% safe”

The bombing at Manchester Arena will likely loom over live entertainment events for some time. As the summer approaches and music festival season begins in earnest, it's reasonable for concertgoers to wonder if that attack — which left 22 people dead and 59 more injured after a homemade explosive was detonated outside an Ariana Grande show — could be replicated. And if it could, would they be any safer than the people in Manchester Arena on May 22?

Attendees will likely be asked to be on the lookout for any suspicious behavior or signs of panic, and they will surely notice an increase in security presence. The Metropolitan Police Service in London said in a statement shared with the public after the attack that it has stationed "highly visible reassurance patrols around key locations," including outside of "smaller events, which may not have had a police presence." In the United States, prime targets such as New York City's Madison Square Garden will have "increased security measures, including a greater police presence," an MSG spokesperson wrote in a statement shared with Mic.

This vision of heavily armed security teams standing guard to protect buzzed attendees from unknown threats is not exactly a glimpse at the future of show-going. As jarring as this attack was, it doesn't mean that suddenly everyone's next major concert experience will become an Orwellian experience.

"In terms of large, structural changes, in terms of how people go in and out of these facilities, I don't imagine there are going to be huge changes,"  Brian Nussbaum, a former employee of the New York State Office of Counterterrorism, said in a phone interview.

The modern concert arena is already a fortress, surrounded by several rings of security, metal detectors and bomb-sniffing and vapor wake dogs, whose noses can follow the scents of hazardous chemicals like a trail of breadcrumbs. Venues have been making great strides when it comes to tightening their security protocols, a direction that's become frighteningly necessary following a number of violent attacks: There was Paris' mass shooting in 2015, in which 89 people were killed at the concert hall Le Bataclan, which happened alongside 40 more in attacks across the city; and there was the Pulse nightclub shooting in 2016, in which a lone gunman took 49 lives in Orlando, Florida.

"There has been a growth in focus on these issues," said Nussbaum, who now works as an assistant professor at the College of Emergency Preparedness, Homeland Security and Cybersecurity at University of Albany. "I'm not sure that Manchester will drastically shift the way that's already been moving."

Every new attack brings with it a familiar cycle: The news breaks, casualties are counted, the killer's identity comes to light, a group claims them as one of their own, police investigate all aspects of the attack and similar venues try and draft a response to eliminate future risk of a repeat incident. The Manchester Arena bombing exposed a few weaknesses in the security measures that many venues likely share — specifically in the outskirts of venues' secure area.

"What you're seeing right now to respond to this is organizations looking to push their security out a little bit, beyond their normal positions, maybe extend their perimeter," Andy Jabbour, founder of risk management firm Gate 15, which deals with critical infrastructure security, said. The fatal attack on singer Christina Grimmie in 2016 as she signed autographs outside the Plaza Live in Orlando, Florida, also drew attention to the outer ring as an area in need of additional security attention.

As news reports have noted, the Manchester attacker never entered a traditional security cordon. He struck in an indoor foyer when the concert was over, approaching the venue wearing a large backpack, as fans leisurely streamed out toward the train station and their respective homes.

"That [behavior] should capture my attention," Herrera, who also holds a position as director of education at the International Association of Venue Managers, said. "That's what we're training [staff] to do. Just having some dialogue, even from the guest services perspective, like, 'Hey, you look lost and how can I help you?' That might be just enough, because typically the threat today doesn't want to affect one person, they want to affect the massive crowd. So if you keep them away from the crowd, that's the key component."

It's unclear at the moment how Manchester Arena will address this weak point moving forward. The venue will remain closed until the Greater Manchester Police conclude their investigation into the attack, and thus far representatives for the venue have declined to discuss the changes they're looking to make, precisely for security reasons. Grande has suspended her world tour for now, but will be returning to the city on Sunday to perform and host a star-studded benefit show at the Old Trafford Cricket Ground featuring Justin Bieber, Katy Perry, Pharrell and more, to raise money for the bombing victims' families. Attendees will not be allowed to bring bags to the charity concert.

Meanwhile, certain venues across Europe have already started making tailored changes based on what we know about the way the attack unfolded. A Guns 'N' Roses tour stop in Ireland banned backpacks and waistpacks at its May 27 show. The Lanxess Arena in Germany has started inspecting every concertgoer's bag and "installed turnstiles to slow the fans' entry and thus allow better surveillance," according to CBS news.

The United States may not be as close to the epicenter of ISIS' operations as Europe, but cities and choice entertainment districts continue to appear in ISIS' propaganda materials, as several security experts noted, asking that we not print the specifics. Venue owners at all levels are in the process of addressing the possibility that America may soon face a similar sort of attack of this kind.

"There's definitely been an increased recognition that there has to be a security presence at even the smallest venues," Brian Visnov of Echelon Protection and Surveillance — which handles security for venues and events of all sizes in New Jersey, Pennsylvania, Maryland and Delaware — said. "We received some calls [recently] from monster truck rallies, Renaissance fairs. There's this trickle-down effect of happens because there's a heightened sense of concern."

To a certain extent, the Manchester bombing has forced security teams to expand the list of potential targets more than some of the previous attacks mentioned above.

"This incident was not only part of the move to soft targets, not only part of the move to civilian targets, but it was also part of a move to targets that are shocking and appalling," Nussbaum said. He described the current situation as being similar to the aftermath of the 2004 Baslan school siege in Russia, in which Islamic extremists held a school full of young children hostage to demand the Russian government pull out of Chechnya, resulting in 330 deaths. Security consultants are again having to rethink their notions of what kinds of targets terrorists feel comfortable attacking.

"That creates a difficult security challenge as you don't necessarily have more resources to devote, but you have more things you're trying to protect," Nussbaum explained.

This will likely have two immediate results: Ticket costs will increase, and concertgoers will have to assume more responsibility for their own safety when attending events. Billboard recently spoke to several insiders who said security costs for some festivals "could double to about 20% of the overall budget." Mic contacted dozens of mid-sized venues across the U.S. and Europe, and nearly all declined to comment on the record about the specifics of their changing security protocols and the challenges their costs present. Visnov, though, sees this cost-increase as a nonissue.

"If there is an increased cost, people are going to be happy to pay the extra money for a large venue to make sure they see plenty of security there," Visnov said. "What did [the events in Manchester] tell everybody? Everything is a target."

To complement any added security measures, we'll likely see more venues adopting variations of a "see something, say something" campaign and more calls for public vigilance, according to Nussbaum. At a certain point, there's only so much that security can do.

"We feel when we go to these events we're safe — well, we're trying," Herrera said. "The venue managers are trying to take that [threat] away so you don't have to worry about safety. But the problem is we all bear a responsibility to assure the safety of ourselves and those around us and report anything we see that's unusual."

Local venues have already begun pushing out this message — including New Jersey's MetLife Stadium, which sought to remind "the citizens of New Jersey to remain vigilant" in a recent statement, and Glasgow's SSE Hydro, which reassured the public they're working with police to assure security is "scaled appropriately."

"We can't keep you 100% safe," Jabbour said. "It's delusional to think anyone can guarantee complete safety. But we're going to do our best and we hope you're going to come and do your part and enjoy the show."