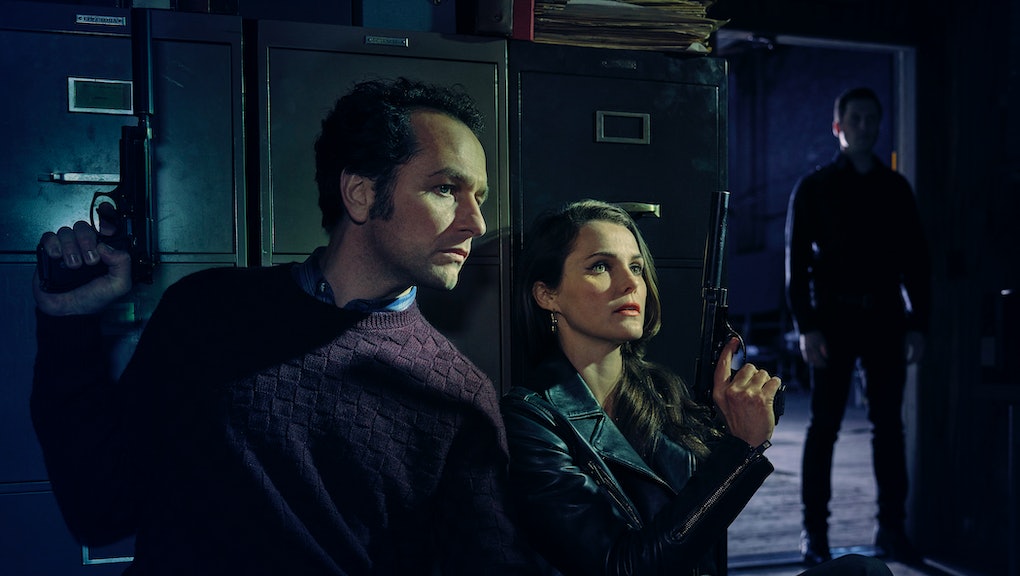 When you're in the spy business, specifically during the Cold War of the early 1980s, murder is more than an occupational hazard — it's an everyday part of the job. So on the FX drama The Americans, which follows the travails of two KGB spies working undercover in Washington, D.C., regular killings in the line of duty were established as early as the pilot episode. But as the seasons progressed, it became more than clear that these innumerable deaths had begun to weigh on the series' protagonists, Philip and Elizabeth Jennings — played by Matthew Rhys and Keri Russell, respectively.

For that reason, the series' current installment, season five, has featured a smaller number of killings, and the emotional consequences of a particular one — the unnecessary death of a lab worker — continues to gnaw at the Jennings' psyches. Philip's inability to pull the trigger during a routine assassination in a recent episode is proof of this. However, with the season drawing to a close on Tuesday, May 30, and 2018 seeing the conclusion of the series, it seems like the right time to reflect upon some of the nastiest kills made in the name of Mother Russia, the USA and in several cases, just good, old-fashioned revenge.

One of the many things that makes The Americans such great television is it does away with the black-and-white distinction between "good guys" and "bad guys." The so-called "enemy" — such as the KGB, aka Philip and Elizabeth — tends to be the characters viewers root for (though not always). Along those same lines, Noah Emmerich's all-American FBI agent, Stan Beeman, doesn't exactly have the cleanest record himself. Stan's dark side was revealed late in season one when, after receiving the news that his partner, Chris Amador, was killed, the intelligence officer took his anger out on a low-ranking KGB employee named Vlad Kosygin: While Vlad chewed on a hamburger, Stan shot him in the back of the head, the masticated beef spilling out of the Russian man's mouth.

Beneath Claudia's "Granny"-like exterior lies the heart of a lethal Soviet agent, and her ability to meticulously torture her victims was best illustrated when she sought out the man who had her onetime lover, General Viktor Zhukov, executed.  Posing as a little old lady locked out of her niece's apartment, Margo Martindale's character paralyzes her victim, a CIA agent named Richard Patterson, with a stun gun and an injectible serum before slicing open his neck, causing him to slowly bleed to death. As a pool of blood spilled out around his head, Patterson was forced to spend his final minutes alive listening to Claudia reminisce about Zhukov.

3. The Connors family massacre in "Comrades" (season two, episode one)

It's rare to see Philip and Elizabeth Jennings frightened for their lives — and for the lives of their kids — on The Americans. But that's exactly what happened when they arrived at a hotel room to discover that fellow posing-as-an-American-couple Soviet spies Leanne and Emmett Connors had been killed along with their U.S.-born daughter, Amelia. What's most disturbing of all, though, is the identity of their murderer: In the season two finale, "Echo," the mystery is solved when the Connors' teenage son, Jared, reveals moments before his own death that he executed his family when they objected to the KGB's decision to recruit him without their knowledge.

Just because a kill is nasty doesn't mean it can't also be carried out in a nice and neat fashion. No blood is shed this time, because the act is committed in a hotel pool (think of the mess that would leave!). Elizabeth, all ice-cool demeanor, takes a break from swimming laps in order to spray a visiting Pakistani intelligence agent with a heart attack-simulating substance that allows her to choke him to death while still in the water. Adding to the terrifying factor is the use of the Pete Townshend song "It Must Be Done," co-written specifically by the legendary musician for the episode.

As mentioned earlier, The Americans has no qualms about presenting U.S. nationals as questionable individuals. In season two, Navy SEAL Andrew Larrick wasn't just a questionable individual, he was a downright loathsome villain (though his noxious demeanor is likely the result of living in an era where he could be blackmailed for being a closeted gay man). This KGB informant was well-trained in the art of swift murder, but in the case of Philip and Elizabeth's young handler, Kate, he also had a knack for torture: Larrick first strung her up by her wrists, gagged her and swung her body back and forth before ultimately breaking her neck.

In this instance, it's not so much the killing that's grisly, but the method of removal. Following the hotel-room death of Philip's asset Annelise in the third season premiere, the Jennings are tasked with an unusual assignment: Get the dead body out of the hotel without anyone noticing. This requires a large suitcase and a strong stomach, because we then have to watch Philip and Elizabeth break several of Annelise's bones so that they can, you guessed it, fold her body into the suitcase. What really makes this scene hard to swallow is the crunching, cracking sound of Annelise's bones as the Jennings form her into a neat little package.

You know why this death is so chilling? We don't even see the victim's face. A poor, unnamed guy who works for the aircraft manufacturing company Northrop (as evidenced by his car's ID sticker) is doing some undercarriage work on his automobile late at night. An in-disguise Elizabeth strolls on by, taking a moment to relieve the car from its elevated position and causing it to fall smack-dab onto its owner. Now that Elizabeth has created a job opening over at Northrop, her asset, Lisa, can put in for a transfer and obtain the intel the KGB agent needs on a Stealth bomber.

In a brutal example of tit for tat, a black South African freedom fighter working with Philip and Elizabeth retaliates against the oppression his countrymen have suffered under apartheid. The freedom fighter, named Reuben, refuses to let the Jennings dispatch their captured Afrikaner prisoner, Eugene Venter, insisting that, "We have a way of doing things." That "way" is the practice of "necklacing," in which Reuben places a large rubber tire around Venter's chest, douses him in gasoline and sets him ablaze.

On the surface, this is probably the gentlest murder that has ever occurred on The Americans, but that's why it leaves such a revolting taste in the viewers' mouths. In short, Elizabeth kills an old lady who was in the wrong place in the wrong time by having her down an entire bottle of her own heart medication. The 20-minute sequence initially seems merciful: Elizabeth and the elderly woman, Betty, talk into the night about Betty's late husband, and Elizabeth even tells her the truth about her Russian family. But it concludes with the sinister side of Elizabeth's actions at the forefront. An increasingly woozy Betty chastises her captor with her dying breath, telling Elizabeth that her insistence that she's "making the world a better place" is in actuality, "what evil people tell themselves when they do evil things."

By now, it has become well-known to Americans viewers that Philip's innate lethal capabilities may be the result of genetics: His father was a prison camp guard who wasn't known for his gentle touch. But even before we were treated to this revelation, audiences were already aware that Philip had started exhibiting murderous tendencies when he was a little boy. In the season four premiere episode, the Soviet spy is plagued by a recurring flashback in which he used a rock to savagely bludgeon a kid who was bullying him. This killing is even more upsetting now that we know young Mischa (Philip's real name) was being tormented because his father was such a hated member of the community.

You'll never listen to Soft Cell's new wave song the same way again: When an airport worker notices that Philip's handoff isn't going so smoothly, he starts asking a few too many questions. That's a death sentence for anyone who accidentally gets entangled in one of the Jennings' missions, so Philip has no choice but to relieve this innocent worker of his ability to breathe. The fact that this scene is soundtracked to the lively dance track "Tainted Love" just makes it all the more disturbing.

12. Elizabeth slits the throat of a mugger in "Dinner for Seven" (season four, episode 11)

Even though Paige Jennings has been aware of her parents' real identities since the third season, she didn't have a real sense of just how lethal Mom and Dad actually were until she and Elizabeth were accosted by muggers one night. After one of the men starts leering lasciviously at her teenage daughter, Elizabeth knocks him out cold with a ferocious punch. But when the other guy brandishes a knife, that's when Paige gets a crash course in how the KGB deals with street robbers: Elizabeth overpowers the assailant and slashes his throat with his own weapon. Because nobody messes with her daughter. Period.

13. Philip turns a lab worker into a human pretzel in "The Midges" (season five, episode three)

Philip may have broken Oklahoma lab employee Randy Chilton's body in half at the end of this season five episode, but the repercussions of this act have broken something far worse: his soul. Throughout the season, Philip has been struggling with his guilt over the murder of this innocent man (the Jennings found out later on that Randy had died in vain), and as evidenced in episode 11, he can no longer bring himself to carry out assassination orders.

14. Elizabeth shoots a married couple in the heads in "Dyatkovo" (season five, episode 11)

Aside from the fact that it's just really upsetting to see an elderly husband and wife pleading for their lives to be spared, this killing is a turning point in the Jennings' future as reliable KGB officers. As mentioned above, Philip is unable to pull the trigger on their targets, a former Nazi collaborator and her American husband, because he has been too shattered by the amount of murders he's been forced to commit in the name of his work. But this is also a game-changer for Elizabeth, who, shortly after finishing the job, is so saddened by what she's done that she tells Philip she's ready to return to the Soviet Union.

The season five finale of The Americans airs Tuesday, May 30 on FX at 10 p.m. Eastern.