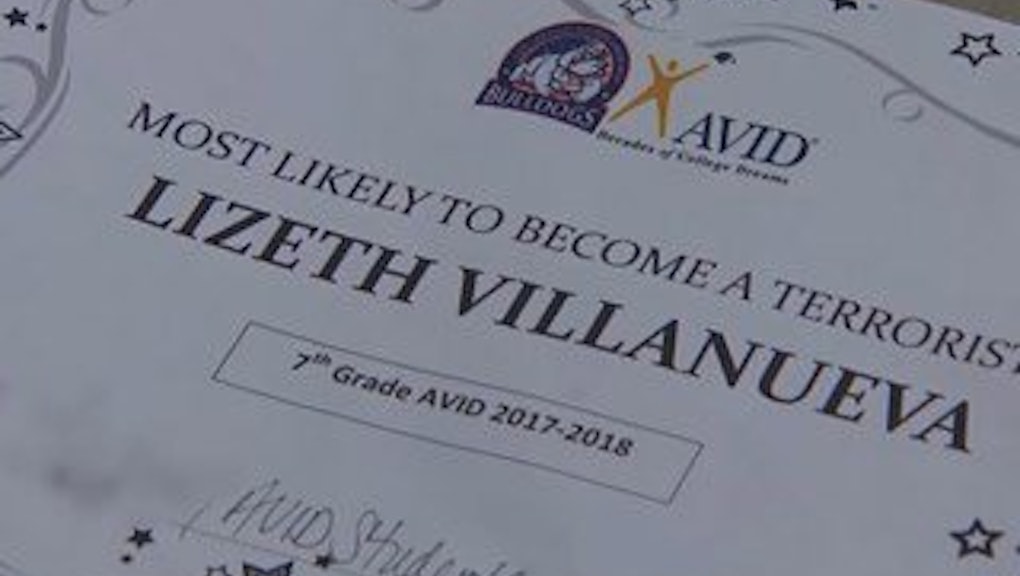 The day after the Manchester, England, bombing, a Houston-area junior high school teacher gave her seventh grade student a "mostly likely to be a terrorist" mock award.

Lizeth Villanueva, a Lance Cpl. Anthony Aguirre Junior High School student, told Click2Houston the award incident happened on Tuesday during her AVID class, which is a advanced college preparatory course. She was taken aback when her teacher handed her the "terrorist" mock award.

"I was shocked," Villanueva said. "[The teacher] said, 'Most likely to become a terrorist,' and she said my name, and she gave me this."

The awards, including the one Villanueva received, were presented in the form of a certificate and included the teacher's signature at the bottom.

Villanueva said her teacher handed out the superlative awards with the disclaimer that "it might hurt [student's] feelings," but was done in good fun.

The student's mother, Ena Hernandez, said her family and daughter were hurt when the teacher gave Villanueva the award.

"We're really upset about it coming from a teacher," Hernandez told Click2Houston. "That program is supposed to be for advanced kids. It is kind of hard to believe that she's doing that. Being a teacher giving this to a 13-year-old. How is she going to feel when she grows up later on?"

On Wednesday, the school released a statement apologizing for the "insensitive and offensive fake mock awards" and announced that the incident will be investigated.

After the incident, Hernandez said she met with Aguirre Junior High's assistant principal and that he apologized for the incident.

Channelview Independent School District also released a statement condemning the mock award and said the teachers involved were disciplined. It did not release the teacher's name.

The Channelview ISD Administration would like to apologize for the insensitive and offensive fake mock awards that were given to students in a classroom. Channelview ISD would like to assure all students, parents and community members that these award statements and ideals are not representative of the district's vision, mission and educational goals for our students.

Villanueva said the teacher was suspended.

But Hernandez said an apology and suspension won't do.

"Get fired, at least, or something," Hernandez said.