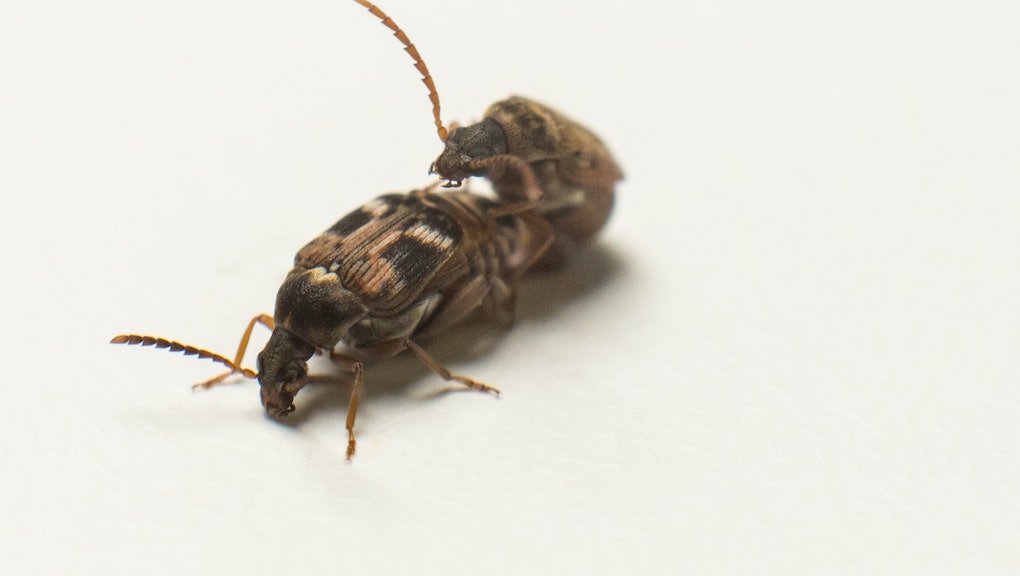 They're creepy, they're crawly and they're involved in an evolutionary battle of the sexes.

Male and female seed beetles are currently engaged in what researchers called a "sexual arms race," in which female beetles have begun evolving thick internal shields to guard themselves against the males' spiked penises, according to a new study from researchers at the University of Western Australia.

Seed beetles engage in what's called "traumatic mating," according to the study, meaning their mating actively causes physical harm. The males' spiked penises evolved to help them ensure successful fertilization, but they have the additional consequence of wounding the females' reproductive tract.

So in response, female seed beetles are developing "counter-adaptations" to resist the males, including thicker, more protective female reproductive tracts, as the study's lead researcher Liam Dougherty told the New Scientist on Wednesday.

The spiked penises and the thickened reproductive tracts are "coevolving" in relation to to each other, according to the study. So is there a danger that females could become so good at resisting the males' spiked junk that it harms the furthering of the species?

"That is a possibility," Dougherty said in an email Thursday. "Theoretically, this could lead to population shrinkage and even extinction if it carries on." But, according to Dougherty, this case just goes to show that evolution doesn't always make sense.

"Evolution is not forward thinking," Dougherty said. "Sometimes organisms evolve traits that lead to extinction." For now though, the seed beetle's genital "arms race" is in full swing.