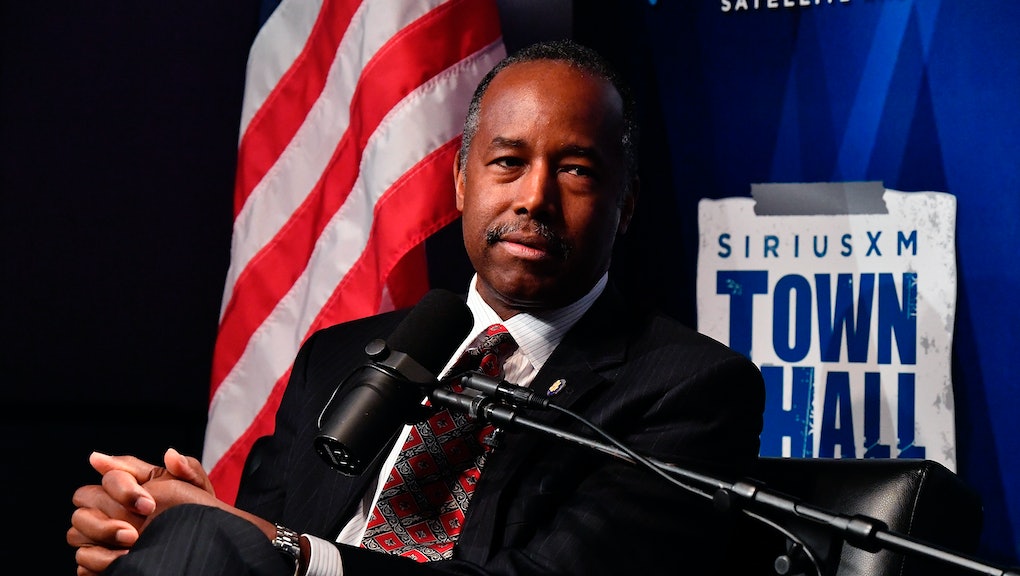 Ben Carson may be a neurosurgeon, but there are some things about the brain he just doesn't seem to understand.

During an interview with SiriusXM Radio released Wednesday, Housing and Urban Development Secretary Ben Carson blamed a "certain mindset" among some people living in poverty as contributing to their economic situation, the Washington Post reported.

"I think poverty to a large extent is also a state of mind," Carson told SiriusXM. "You take somebody that has the right mindset, you can take everything from them and put them on the street, and I guarantee in a little while they'll be right back up there."

"There's also a poverty of spirit. You develop a certain mindset," Carson said, adding that a person with the right mindset could work their way out of poverty, despite their conditions.

Carson's ideas regarding poverty are not uncommon among politicians. Many politicians espouse the "bootstraps" theory — the idea that social mobility is determined by a willingness to not be poor. However, science continues to prove this theory false.

In a phone interview, Kimberly Noble, an associate professor of neuroscience and education at Columbia University's Teachers College, said there is now "pretty clear evidence" that poverty has real effects on brain development and cognition.

According to the Post, Carson attributed this mindset to bad parenting habits. Noble disagrees on that point, pointing to research that shows poverty stresses parents and infants and restructures the young brain.

Research shows that poverty's effects on brain cognition can be seen in children as young as two years old, according to Noble. She said it's "essentially impossible" to blame a mindset in the children for these developmental differences.

"We'd be hard pressed to ascribe those differences to some kind of mindset in the children, as opposed to differences in experience," she said.

In his role in President Donald Trump's cabinet, Carson oversees several federal programs, like the Section 8 housing program aimed at helping lift impoverished families out of poverty. Carson called the validity of those programs into question, as well.

While he said it's OK for the government to give people a "helping hand," he warned that some programs are "sustaining them in a position of poverty. That's not helpful."

"Government programs are more likely to break the cycle of poverty than to perpetuate it," she said.