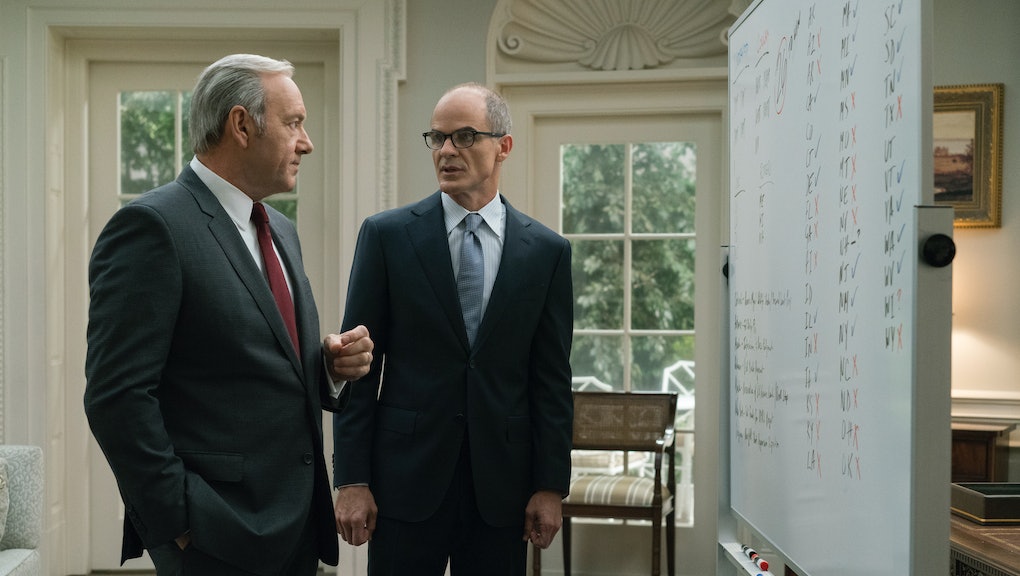 Another season of House of Cards, another batch of deaths that you can at least partially credit to the Underwoods. Season five takes its time in racking up the body count; the first major one doesn't arrive until the tenth episode. But when all's said and done, there are as many as five major characters who meet their end this season — though with two of them, we can't give a definitive yes.

Admittedly, some of the deaths were quite surprising, both in who is killed off and the manner in which the series does it. Below, you can check out the complete list of characters who die — or probably die — this season.

Aidan MacAllan: Aidan, who may or may not deserve to be judged for his absurd interpretive dance routine in season four, goes full Edward Snowden this year after taking political asylum in Russia. For the Underwoods and their allies, he obviously knows a dangerous amount of stuff — most notably, that they tampered with the presidential election, with his help, once it was clear Frank was going to lose to Will Conway. And yes, we know: An election fraud storyline is such a fun thing these days.

Aidan eventually makes his way back to the States, after a convoluted plan involving a U.S. journalist who unknowingly lures him to an interview where he's snatched up and sent back to America. He does make it stateside in episode 10, but it appears he's still evading Underwood's lackeys. He finds his friend, confidant and, as we eventually learn, former lover, Leann Harvey, and informs her that he's about to run away for good, asking her to join him. She declines, but offers her gun as protection before he makes it out of the country.

Shortly after, Leann receives an email with an audio clip from Aidan. The recording informs her that, since she's receiving this, he's died. We don't see how he dies, but a gunshot to the head, and the fact that we see the gun away from his bed, never retrieved from the crime scene, makes it clear that it wasn't a suicide. Someone had him killed; seeing newcomer Jane Davis, played by Patricia Clarkson, shredding documents with his name at the end of the 10th episode, makes her guilty by association. May you dance interpretively in heaven, Aidan.

Tom Yates: Is being a concubine in the White House fun? Probably, yeah, until your lover murders you. If you're reading this and didn't already know how Underwood speechwriter (and Claire's boytoy) dies, well, prepare yourself.

So, Claire decides to let Tom go, in part because he doesn't want to do speechwriting anymore, but also because of the intimacy of their relationship. Claire confesses some serious shit to him, like how Frank killed Zoe Barnes and Peter Russo, and appears to genuinely love him. When you're Claire Underwood, you can't have sappy shit like that drag you down.

Anyway, it was probably unlikely that it would've been enough to have Tom killed, it's only when he shares an entire book (!!) about the Underwoods that Claire realizes she might've taken the fling too far. "You portrayed us like a couple of monsters," she tells him. She kind of proves his point, by presumably poisoning his whiskey. It takes a while before the poison takes effect, just enough time for Claire and Tom to have sex one more time. That's right: Tom literally dies mid-coitus, with Claire on top of him. It's moments like this that remind me why I love House of Cards.

Yusuf Al Ahmadi: Ahmadi, one of the leaders of ICO — the show's version of ISIS — isn't seen on screen this season, but he's still a persistent threat for obvious reasons. One of the intriguing threads with the Underwoods is, essentially, when they think it would be to their advantage to take out Ahmadi. Do they wait until after the election, to maintain the culture of fear in America?

Eventually, Ahmadi is killed by American forces in the season finale once Claire assumes office (if you're surprised by this, we warned you about spoilers, and this is a story about people dying).

Cathy Durant: Frank's capable secretary of state has been wary of the Underwoods for some time, but she probably wasn't aware of the great lengths they'd go to for self-preservation. Case in point: When Cathy agrees to testify against Frank in court, potentially getting him impeached, he asks to meet her the day before her hearing.

Frank swiftly pushes her down the stairs. It's not shoving Zoe Barnes in front of a train at the beginning of season two levels of bad, but it's still pretty shocking. It's enough to postpone Cathy's hearing — and if people love conspiracy theories in politics, you can imagine how the public in House of Cards would view this "accident" — which ends up being irrelevant after Frank elects to resign from office.

By the end of the season, we aren't sure how Cathy's doing. However, we imagine the Underwoods will keep tabs on her. I mean, if she wakes up, wouldn't she just tell the press about it? That would make body-slamming reporters look like child's play.

Leann Harvey: In the season five finale, Leann is driving her car to go meet with Doug when her phone rings. An ominous, raspy voice asks: "What's your favorite scary movie?"

All right, just kidding. But Leann, played by Scream alum Neve Campbell, probably meets her end in season five, for the simple fact of knowing too much (see: the stuff with Aidan and election fraud). An attack, seen off screen, that leads her car to have a harrowing accident on the road, is orchestrated by Jane and Frank. Doug ostensibly didn't know about it, considering he repeatedly calls her phone and goes straight to voicemail, and considering that they had sex at least once (it's been a weird season).

If by some chance Leann did survive the car accident, she's not the kind of person the Underwoods would want against them. Look at what she did to Ghostface over a four-movie franchise.

The fifth season of House of Cards is currently streaming on Netflix.