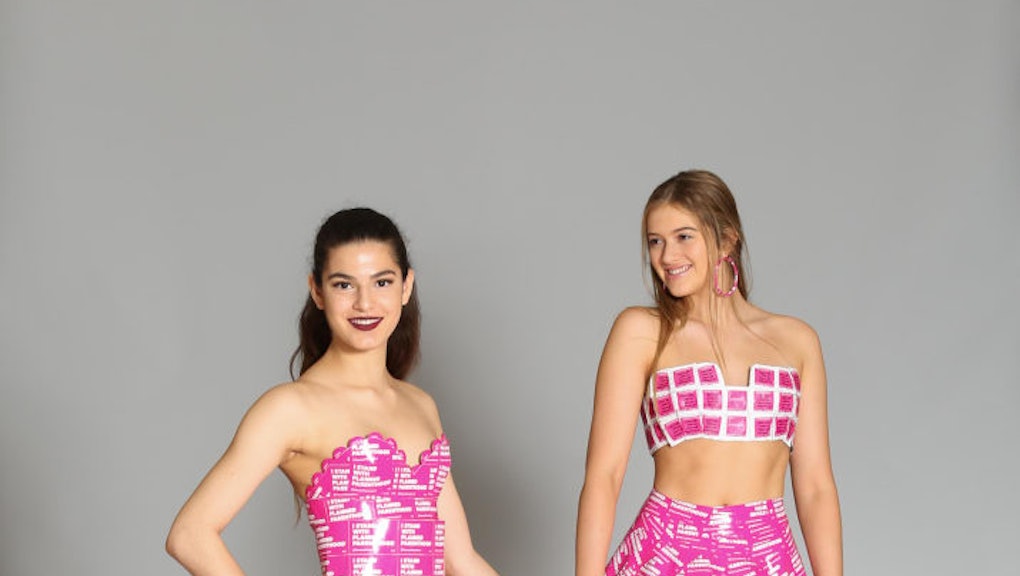 In the immortal words of the great Tim Gunn, these two teens "made it work."

At Ethical Culture Fieldston School in the Bronx, New York, every year, students are encouraged to participate in a fashion show with a hitch: Anything but fabric can be used to make the outfits. So that means that students like to get creative, creating gowns out of things like playing cards and Barbie dolls.

But this year, students Karolina Montes, 17, and Zoe Balestri, 16, not only got creative — but they got political, too.

For their two outfits, they decided to primarily use Planned Parenthood merchandise, from flyers to stickers to condoms.

"This year we thought, after everything that's been happening in the world and with this country, it was important to make our dresses beautiful and fun but also to give them some sort of meaning," Balestri told BuzzFeed. "We decided this was the perfect way to support something we both strongly believed in."

For Montes, it was really just about educating their friends about Planned Parenthood too.

"It just seems like such an important part of our culture, that we need to have safer methods [of family planning] and we need to educate," Montes told BuzzFeed. "That's the main the point, is to educate people."

While Montes' dress was mostly stickers and Planned Parenthood posters, Balestri mixed it up a bit, constructing the skirt of her dress from a shower curtain and stickers and the top out of condoms, which understandably got messy.

"I actually sewed together the condoms with a needle. That took awhile, and I got lube all over my hands, which was kind of gross," Balestri told BuzzFeed.

In addition to Montes and Balestri, other students this year created outfits from everything from Spongebob Squarepants bandages to Leggos.

But according to Montes, the school was totally supportive of their ensembles, especially considering their creativity. "The reaction was very supportive, very overwhelming," Montes told BuzzFeed.

And Planned Parenthood seems pretty stoked about it too.