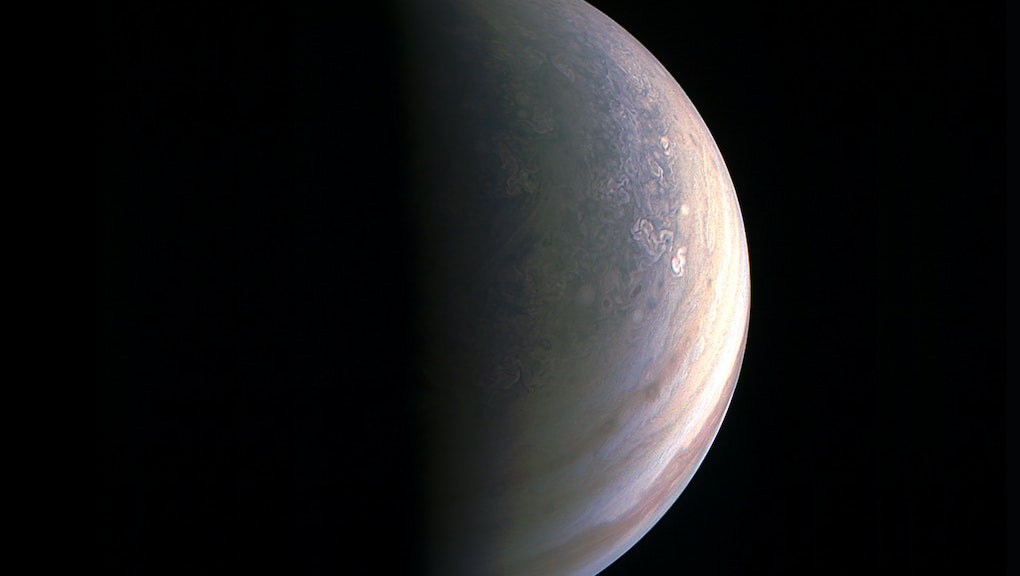 The Juno mission, an expedition part of NASA's New Frontiers Program, has delivered its first scientific results — and it's already proving to be very informative. A pair of papers released this week in a special edition of Science Magazine shed preliminary insight into Jupiter's interior structure, atmosphere and magnetosphere. The spacecraft is also sending over some epic pictures of the gas giant.

"What we've learned so far is earth-shattering. Or should I say, Jupiter-shattering," Southwest Research Institute's Scott Bolton, the Juno spacecraft's principal investigator, said in a press release. "Discoveries about its core, composition, magnetosphere and poles are as stunning as the photographs the mission is generating."

Juno — a spinning solar-powered spacecraft — launched on Aug. 5, 2011, from Cape Canaveral in Florida and entered Jupiter's orbit in July 2016. The probe is scheduled to make 37 orbits over 20 months before the mission ends. The spacecraft is equipped with eight scientific instruments: a gravity/radio science system, a microwave radiometer, a vector magnetometer, plasma and energetic particle detectors, a radio/plasma wave experiment, an ultraviolet imager/spectrometer, an infrared imager/spectrometer and a color camera called JunoCam.

Jupiter has giant storms and cyclones

The first study, led by Bolton, looks at the massive storms and cyclones located at Jupiter's poles. The "Earth-sized cyclones" are "densely clustered and rubbing together," with cyclones reaching up to 870 miles in diameter and 60 miles in height — much larger than any cyclone found on Earth.

The JunoCam managed to capture images from the poles. The below image of Jupiter's south pole, taken from an altitude of 32,000 miles, shows cyclones as oval shapes. The image was created by combining photos from three separate orbits so that all areas could be portrayed in daylight.

"We're puzzled as to how they could be formed, how stable the configuration is and why Jupiter's north pole doesn't look like the south pole," Bolton said in a NASA statement. "We're questioning whether this is a dynamic system, and are we seeing just one stage, and over the next year, we're going to watch it disappear, or is this a stable configuration and these storms are circulating around one another?"

There's ammonia in the atmosphere

"It resembles a deeper, wider version of the air currents that rise from Earth's equator and generate the trade winds," Bolton said.

Its magnetic field is stronger than previously believed

"Already we see that the magnetic field looks lumpy: it is stronger in some places and weaker in others," Jack Connerney, Juno's deputy lead investigator and the lead for the mission's magnetic field investigation at NASA's Goddard Space Flight Center, said in a NASA release. "This uneven distribution suggests that the field might be generated by dynamo action closer to the surface, above the layer of metallic hydrogen."

Jovian aurorae form differently on Jupiter than on Earth

And then there's Jupiter's violet-blue auroras. Juno took a look at the planet's polar magnetosphere to understand how the its auroras — northern and southern lights — develop. The scientists expected to learn Jupiter's auroras were similar to those found on Earth, but ended up finding the opposite. The gas giant's aurorae form when electrons are eliminated from Jupiter's polar region. Auroras on Earth, on the other hand, form when particles stream in from space.

"It's a 180-degree reversal of what we were originally assuming," Connerney told ScienceAlert. "We never expected to see such strong auroral emissions caused by electrons being channeled out of the polar region."

Juno will next fly directly over Jupiter's Great Red Spot — a giant storm that has been active on the planet for centuries — in July.