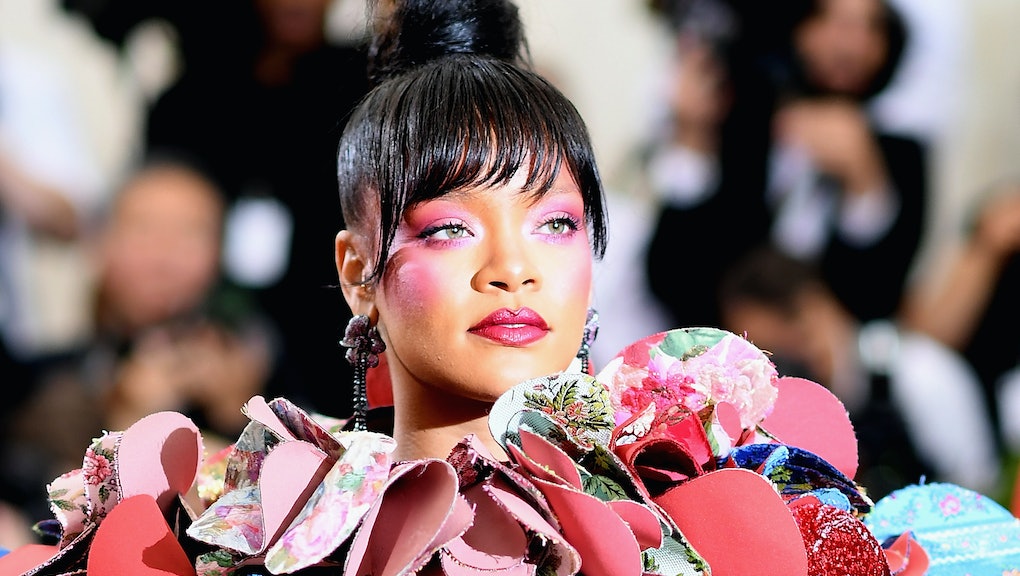 Why is blush even a thing?

People seem to have a lot of questions and concerns surrounding the existence of blush, that pinkish powder millions of women love to dab onto the apples of their cheeks.

Google it and you'll see headlines like: "Guys are attracted to girls who wear blush"; "Why you MUST STOP wearing powder blush NOW!"; and "Sex hormones make women's faces redder as a sign of fertility."

It's a product that, despite its ubiquity and so many women swiping it on without a second thought, is actually filled with a lot of unknowns — perhaps most critically: Why is it even a thing?

We were curious  ourselves, so to answer that question, we looked back at the history of how blush became such an essential part of everyone's beauty routine.

As with many of our essential beauty rituals, blush started with the ancient Egyptians, who were among the first to use natural ingredients to create a sort of makeup.

In ancient Egypt, ground red ochre (a natural pigment) was mixed with fat to create a red tint that people would smear on their lips and their cheeks that popped against the harsh black kohl around their eyes. And when we say "people," we mean men and women.

Meanwhile, the Romans used red vermilion and the Greeks used crushed mulberries on their cheeks, which stood in stark contrast with their pale faces, and ended up becoming a status symbol of sorts. But as with many cosmetics of this era, it was also deadly. The chalk or lead face powder they'd use to whiten their faces was actually toxic, so that turned out to be not such a good regimen.

With this new development, the Middle Ages saw a drop in cosmetics use, as very pale skin had become a signifier of the high-class. According to Into the Gloss, people at this time took being pale so seriously that they would regularly bleed themselves — as in with leeches — to remove overall redness from the skin. So, while the workers certainly had red skin from working outside all day, the high classes would shutter themselves indoors or even slather on egg whites to achieve the palest complexion possible. Another reason why this was so important was that heavily rouged cheeks were associated with prostitutes.

It was a fine line everyone treaded, until a woman by the name of Elizabeth I, England's queen from 1558 to 1603, endorsed the use of blush again, given that she had a signature look all her own: Bright red hair, a pale face, a high forehead and a slathering of rouge.

However, very unfortunately, while women loved cosmetics from the 1500s to the 1700s, cosmetics did not love women, as many of them were still extremely toxic. In terms of blush, toxic chemicals were in many of the most popular concoctions and when it was applied to the lips, which was a popular alternative to lipstick, it could actually poison the person.

And again, we say "person," because particularly in France in the 1700s, both men and women experimented with not only a lightened face but blush as well.

The reason that we've gathered for blush existing for such a long time in the beauty industry, despite fads and poisonings, is that blush signified a kind of youthfulness, like a kid running around in a park with plump, pink cheeks.

Makeup continued to be controversial after the French Revolution, which ended in 1799. Amid so much turmoil and conflict especially around the wealthiest in France, makeup started to be seen as too extravagant. And on top of that, Queen Victoria, who ruled over the United Kingdom from 1837 until her death in 1901, announced that wearing heavy makeup — like red lipstick — was impolite, associating it yet again with prostitutes.

And so lighter makeup, and natural-looking makeup, yet again was more in favor, with women biting their lips to make them pinker and using crushed beets for blush. (Again, it was all about getting that youthful, girlish glow.)

Then, something happened at the turn of the century that would change makeup — and people's thoughts about it — forever. Makeup became industrialized, with companies like Guerlain and L'Oreal realizing the appeal makeup had for so many women, and then mass producing it. What that meant too is that makeup was safer than ever to use, with companies looking towards more natural ingredients — rather than toxic ones — for once.

So the stage was set for blush to once again become mainstream, and that it did. In the 1920s, flappers wore blush. In the '50s, pinups and Marilyn Monroe and housewives alike wore blush.

In the '70s, men like David Bowie wore blush.

And in the '80s, blush went through a bit of a heyday, when bold makeup was all the rage (think blue eyeshadow), and women used it to define their cheekbones. (Quite obviously, we might add.)

For an example, see this GIF from Working Girl:

Since then, blush has certainly been toned down and a bit augmented. Now, contouring and shaping the face with powder in shades of brown rather than pink is popular, although wearing blush as it was originally used (on the apples of the cheeks) isn't all that rare either.

On women like Reese Witherspoon or Ruth Negga, pink blush is very much still a thing.

It's also going through a bit of a critical phase right now. Not only are women like Rihanna (of course) having more fun with it — slathering it onto half her face at the 2017 Met Gala, for example...

... but trendy makeup companies aimed at young women, like Glossier, are trying to make it seem super cool again too, launching a liquid blush in March called "cloud paint" that people are currently obsessing over.

Could this be the start of a new blush revolution? Mayhaps!

So, here's to blush, not only for its ability to survive a gruesome and lengthy history and come out as one of the most effective makeup items of our time, but also for constantly adapting to trends and the women who love to wear it.