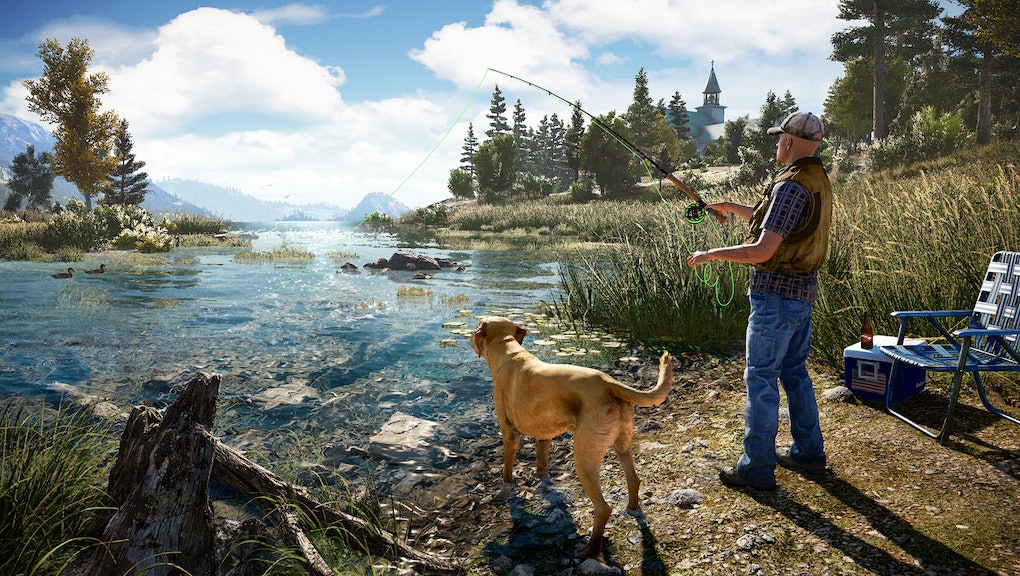 The Far Cry series has traditionally tried to take players to exotic, foreign locales that feel alien to the player. Whether it was a fictional country in Africa in Far Cry 2 or fake Nepal in Far Cry 4, these lands were meant to be unfamiliar theme parks for the (theoretically western) audience.

The fault with that idea, of course, is that Africa and Nepal aren't foreign or weird to plenty of people with access to video games. With Far Cry 5, the tables have been turned and the action takes us to rural Montana. At a recent Ubisoft event, I spoke to creative director Dan Hay about the challenges of setting an action game in western players' backyards.

A reaction to current events, or just lucky timing?

Let's not beat around the bush: It's easy to look at Far Cry 5 as a reaction to the election of Donald Trump and the increasing prominence of far right demagoguery. Its villains trust their own firearms more than they trust the government, having set up shop as a militaristic cult in a state Trump won by 20 percentage points in November. These concepts are presented cartoonishly in the game's marketing, but they are at least somewhat familiar in American political discourse.

That said, video games take a long time to develop and Hay's team at Ubisoft Montreal started work on Far Cry 5 "about a year and a half ago." While the premise isn't necessarily a reaction to specific events, it's meant to feel authentic to the news cycle.

In other words, players who keep up with the state of things will probably feel uncomfortable in spots.

“What we’re trying to do is make it so that when you play the game, and you put the controller down and go eat a sandwich, that whatever’s on the news would echo and reverberate through our game," Hay said.

It would be generous to say video games (and popular media as a whole) don't do a great job of depicting rural communities with any kind of nuance. Sure, we've moved on from Redneck Rampage, but one only needs to listen to Cindy talk in Final Fantasy XV for a few seconds to see that it's still an iffy proposition.

As you can see, Far Cry 5 isn't especially subtle in some of its imagery, either.

Guns, Bibles, the American flag and flannel for days round out what city folk might think rural America looks like. There's a kernel of truth to that, but like anything else, there's a lot more going on under the surface. Hay said that balancing authenticity with fun video game things is an important part of the process.

“You want to build a real world that feels real, and you want it to feel beautiful and welcoming. And you want to make it so that if you turn on the radio, you hear something you could hear in the real world," Hay said. "At the same time, you want to meet characters that are crazy and wild and wonderful and wacky.”

Throughout the game, you'll meet allies in the resistance against the cult who represent the various walks of life in this version of Montana. One such character is Mary May, a bartender who holds the cult in contempt for either indoctrinating or taking her family by force (it's unclear).

She's immediately more believable than Cindy in Final Fantasy XV, but she also exists in the same world as the characters in the Da Vinci riff above. You can expect a mix of both in Far Cry 5.

Hay emphasized that this is a fictional version of Montana, so of course it will go places that the real thing might not go. The idea is for the setting to feel real enough that it becomes even more striking when things go wrong.

"I think it’s really interesting to kind of put things in your own backyard, to put you in a place that when you drive through it to go camping or go on vacation, you don’t think that it’s dangerous, you don’t think that something bad could happen," Hay said. "But if you were to actually stay for 48 hours, and scratch a little, dig a little deeper, right underneath, you could realize that there’s a whole mess of trouble.”

Check out the latest from Mic, including our list of video games that made fun  of their players, a personal essay about dealing with anxiety through Breath of the Wild, a look at the racist and sexist experiences in eSports and a plea for better character customization options for black characters.