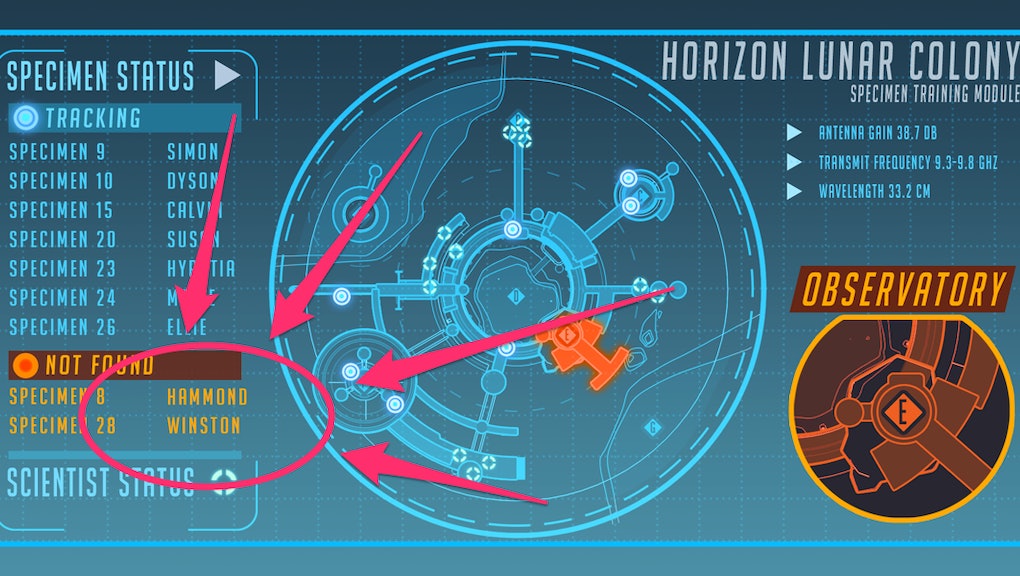 Something new is on the way to Overwatch very soon, and it seems like it could be a new hero named Hammond, a new map on the Horizon Lunar Colony — or both.

Like most Overwatch teases, this one is framed as though it's a news article published by Atlas News, a fictional in-universe news service — and it seems to be leading up to something big on the way to the world of Overwatch.

According to the fictional news article, Earth lost contact with Horizon — the lunar base where the hero Winston was raised — several years ago, but its "databases and monitoring systems" are still functional. Atlas News obtained emails between members of Horizon that indicate Winston wasn't the only gorilla to escape from the moon. Specifically, a "smaller" test subject named Hammond also seems to have escaped before the facility closed and likely made his way to Earth — but it's not clear yet what he's up to now.

"By the way, is anyone else concerned that it's been almost a week and no one's seen Hammond?" an email sent from Horizon employee Zhang said. "His cage has been empty for a week ... I don't know why we ever thought it was a good idea to have smaller test subjects, I completely regret it."

It's unclear exactly what kind of an individual Hammond is, but another email in the article indicates that some test subjects had adverse reactions to the same gene therapy program responsible for Winston's elevated intelligence.

"Just a quick note to let everyone know that I have gone ahead and confined Simon and a few of the other gorillas (you know the ones, the usual troublemakers) to their rooms," an email from Horizon employee Nevsky said. "Their acting out is getting particularly troublesome and I'm not sure how much longer we can tolerate it."

The email goes on to explain that some of the test subjects are a "serious threat" that need to be taken seriously. And, as a precautionary measure, the email finally notes that all test subjects — even the ones who are behaving themselves — will be confined as well.

This correspondence does not indicate whether Hammond reacted well to the gene therapy, or whether he was one of the potentially dangerous troublemakers. Either way, he's on the loose.

The final set of released correspondence from Horizon indicates that one of the airlocks has "malfunctioned," which seems to indicate that Hammond found a way off the station.

So, what does all this mean for Overwatch?

The most plausible takeaway is that the gorilla named Hammond is going to be the next playable Overwatch hero. The post indicates that he's a "smaller" test subject, so that seems to be an indication that he won't be a hulking tank hero like Winston. Perhaps he'll be a defense or support hero instead. Maybe he's not even a gorilla at all.

It's also possible that we're on the verge of getting a new map set on the Horizon Lunar Colony, as several members of the Overwatch community speculated long before this official tease.

For example, Reddit user BillyDiesInTheEnd noted that there were several recent updates to information screens on the Lijiang Tower map that reference Horizon. Before that, a data mine in July 2016 by Reddit user xArDDe uncovered some sound effects that have a spacey, interstellar vibe.

Blizzard will likely continue releasing teases for whatever this new content update is over the next week or so. We'll keep you updated as the information rolls in.