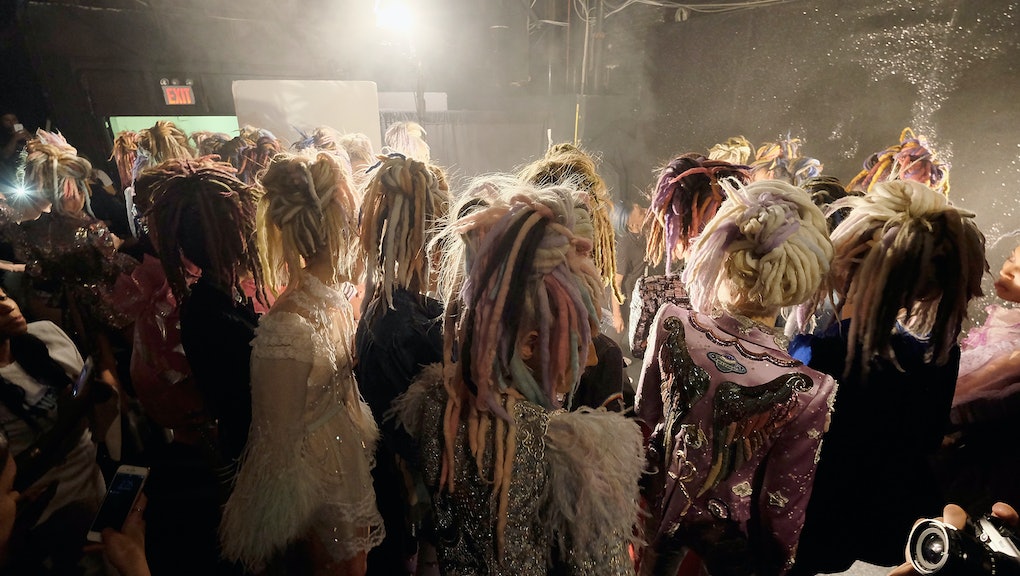 When did everyone become the cultural-appropriation police?

These are all things that, when worn or sold by the wrong person, can send the cultural appropriation police — a group of wise and woke social media users — into a fury, ready to pounce on any instance of appropriation they see on the internet.

When Chanel was accused of cultural appropriation for selling a $1,325 boomerang in May, folks made enough noise that Chanel formally apologized. "Chanel is extremely committed to respecting all cultures and deeply regrets that some may have felt offended," Chanel said. When Marc Jacobs sent models down the runway wearing faux dreadlocks, people made enough noise that Jacobs ended up trying to explain the decision too.

It's a powerful force right now that, 10 years ago, didn't exist at all.

In 2005, before this mass culture of holding designers who could be appropriating accountable, Chanel sold boomerangs to no scandal. Twenty years ago, designers could pull out entire collections heavily influenced by a culture that wasn't their own (or the models') and still thrive.

By that time, the cultural appropriation police was not yet in formation. In fact, in the New York Times' write-up of the show, which had models walking in yarmulkes, Hasidic-inspired garb, curled hair and a runway lined with menorahs, the term "cultural appropriation" was not used.

"I remember people were offended," Carmela Spinelli, fashion historian and chair of fashion at the Savannah College of Art and Design, said in an interview. "But you have to remember that fashion at that time was inner-circle interest. It was really not the way we know it now. Information did not spread.

"People were not interested in fashion, and the ins and outs, as much as they are now."

The difference between 1993 and now? The internet.

The internet has not only democratized fashion and given people the ability to see more fashion, but also offered this massive populace of informed young people, who deeply care about brands and companies taking things from other cultures and profiting from it, a platform to speak their minds.

Because of the internet, the world is not so big anymore.

"Ten years ago, people didn't have the platform to express whatever they thought," Spinelli said. "I think it has everything to do with the platform. People have always been sensitive, but now they have a platform and say, 'OK, this is what we're doing.' These conversations did happen, and it was talked about, but again, the platforms have allowed for these expressions."

Now, more than ever, your opinions can actually have an impact.

"If you see a fashion design and don't like it, you have the ability to voice that and then it becomes viral," Anya Kurennaya, a lecturer at Parsons School of Design, said in an interview. "People are more aware of social injustices and now have a platform to broadcast their opinions."

And broadcast they do. According to Google Trends, "cultural appropriation" was nearly unheard of until 2012, as the internet was modernizing and Twitter was becoming more popular. Since then, it's been a consistent topic.

Of course, the real cause of this constant appropriation conversation isn't just the internet, but the people under fire for appropriating too. There are people like Miley Cyrus and Karlie Kloss and the Kardashian-Jenner family, who have all been accused of cultural appropriation, and have therefore kept this internet task force going.

Same goes for brands like Marc Jacobs and John Galliano and Valentino and Dsquared2 and Chanel and Free People and Urban Outfitters and Tory Burch and Mango. If they were more culturally sensitive, doing their due diligence in research and citing their inspirations for collections or runway shows more clearly and respectfully, then this outrage-cycle wouldn't have to exist.

But it does — and the repeated instances of this happening in fashion are getting exhausting. So exhausting that Kurennaya has come up with the term "cultural appropriation fatigue."

"It's this 'cultural appropriation fatigue' that sets in," Kurennaya said. "You have a hard time avoiding it. And then the anger and emotions are sparked by trolls. It's this culture of getting angry at one another and it doesn't ever really feel that real."

Why does it keep on happening?

Quite simply: Because people are still doing the same thing, despite a clear increase in consumer call-outs.

Within four weeks of one another, Demi Lovato was accused of wearing and therefore appropriating dreadlocks, Chanel appropriated the boomerang and Gucci imitated the stylings of Dapper Dan. Yes, we're very tired.

Are fashion designers and celebrities doing this on purpose for attention? It's a fair question to ask, but Spinelli thinks not.

"I honestly don't think they are doing it to insult anyone," Spinelli said. "I think they're doing it because they’re fascinated by the anthropological aspect of the dress. Those Hasidic coats and those hats — it’s fascinating, it’s marvelous. They're not trying to purposefully upset anyone, but they are."

So why even have this conversation, if these designers seem to constantly try to one-up one another in their levels of appropriation? For Kurennaya, it's about getting to the people who have for the most part not really made up their minds.

Those people are why it's still important to talk about cultural appropriation. They're the undecided.

What's it going to take for it to stop?

But still, we would love to live in a day and age when this didn't have to be talked about. Cultural appropriation and what it exactly means is different to everyone, and that makes it a confusing thing to navigate. But in doing research and keeping an eye on things like inspirations and sources in fashion, celebrities and brands can be leading the way for a more culturally aware world in which appropriation doesn't happen so constantly.

With the global stage a much smaller world now thanks to the internet, increased scrutiny has to be expected for these designers and celebrities — and therefore a more keen attention to detail must be paid.

According to Spinelli, the only way we can get to this fantasyland is through education.

"It’s not going to change unless you educate the next generation that I feel has more sensitivity to the globe," Spinelli said. "Educating the next generation to do several things, like use citations, encourage original work. We want people to come up with original content and the fast pace of this industry isn't conducive to that now.

"There's always going to be reference and inspiration, but you need to understand intellectual indebtedness and have respect for other people's art."

Halting the conversation won't do a thing. Educating this next round of designers and celebrities hopefully will.