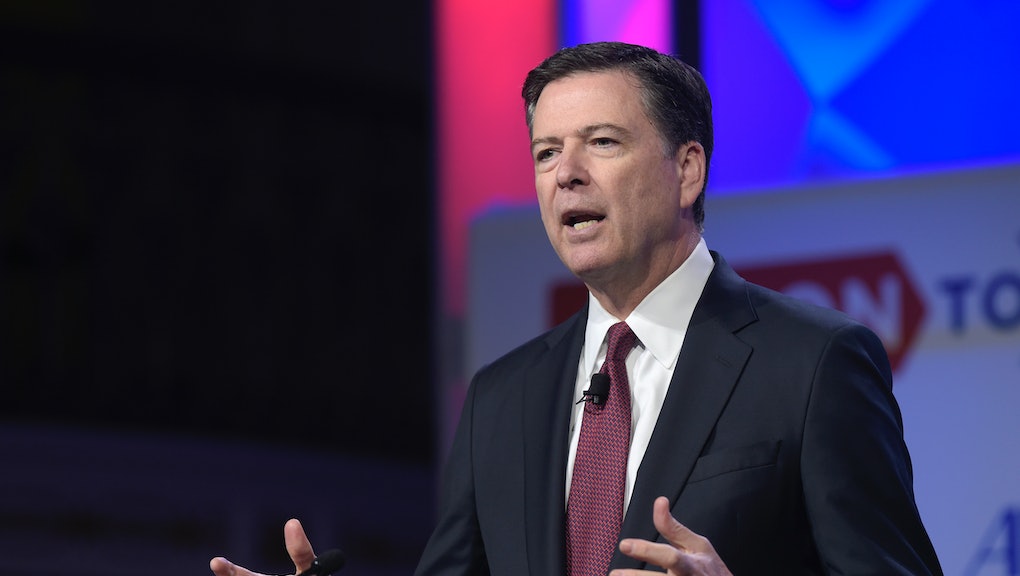 When will James Comey Testify? Here's what's coming up in the Senate Russia probe.

Former FBI director James Comey is set to testify in an open hearing before the Senate Intelligence Committee in the near future, with senators Richard Burr (R-N.C.) and Mark Warner (D-Va.) stating that it would likely occur after Memorial Day.

The hearing is expected to cover Russian interference in the 2016 U.S. presidential election, along with questions about Comey's firing by the president. According to CBS News, a specific date for the hearing has not yet been set, as the office of recently appointed special counsel Robert Mueller — who is conducting his own probe into the Trump campaign's Russia dealings — is "coordinating" with Comey's legal team to decide what Comey will discuss in the public hearing.

The New York Times reported that President Donald Trump privately told the Russians that Comey was a "nut job" and that his firing would ease pressure regarding the ongoing inquiries into Trump's connection to Russia.

Here is a look at Comey's actions throughout the 2016 election campaign, including recent revelations by the Washington Post that he acted on known dubious intelligence from Russia.

Did Comey act on bad intelligence?

According to the Post, the FBI received a dubious Russian intelligence document in March 2016 claiming that former U.S. Attorney General Loretta Lynch assured the campaign of Democratic candidate Hillary Clinton that the investigation into Clinton's emails wouldn't go too far.

The alleged email was said to be between then-chair of the Democratic National Committee, Rep. Debbie Wasserman Schultz (D-Fla.) and Leonard Benardo of the Open Society Foundations. According to the Post, the existence of this email could not be corroborated.

Comey reportedly feared that if Lynch announced that charges were not being brought against Clinton, and the faulty intelligence about Lynch was leaked, the credibility of the investigation against Clinton would have been undermined.

He publicly announced the closure of the case against Clinton in July 2016 without informing Lynch.

Sen. Lindsey O. Graham (R-S.C.), who is heading the Senate Judiciary Committee inquiry into the 2016 Russian cyberattacks on the U.S. election, criticized Comey's handling of the situation on CNN's State of the Union, saying a report showed Comey "took over the Department of Justice’s job based on a fake email from the Russians."

Graham added that Comey never told Congress the intelligence was "fake" and that he needed to be "held accountable."

What is "the Comey letter"?

In October, Comey sent a letter to members of Congress informing them that the FBI investigation into the emails of Hillary Clinton was being reopened.

According to Wired, thousands of new emails had been discovered on former U.S. Congressman Anthony Weiner's laptop, and Comey needed a warrant to read them. The disgraced former lawmaker was the husband of Clinton confidante Huma Abedin; Weiner pleaded guilty on May 19 to sending obscene material to a minor.

The New York Times later reported that the FBI was also investigating the campaign of Donald Trump, but Comey did not disclose this in the letter.

Clinton has blamed Comey in part for her loss to Donald Trump.

Comey defended his choice to inform Congress of the investigation's reopening by saying that concealing it would have been "catastrophic," adding that the idea he may have swayed the election for Donald Trump makes him "mildly nauseous," according to the Associated Press.

Other investigations into Trump's firing of Comey and possible Russia connections

Aside from the Senate investigation into the Trump administration and Russia, both the U.S. House and the U.S. Department of Justice are investigating possible ties.

Abrupt news that Rep. Jason Chaffetz (R-Utah), chairman of the U.S. House Oversight Committee, will resign from Congress on June 30 casts doubt about the future of the House investigation.

The Justice Department has named a special counsel — former FBI Director Robert Mueller — to oversee its investigation into Trump's possible ties to Russia.

According to U.S. News & World Report, a memo from the office of Deputy Attorney General Rod Rosenstein said the investigation by Mueller will cover "any links and/or coordination between the Russian government and individuals associated with the campaign of President Donald Trump," along with any further concerns that emerge from those inquiries.