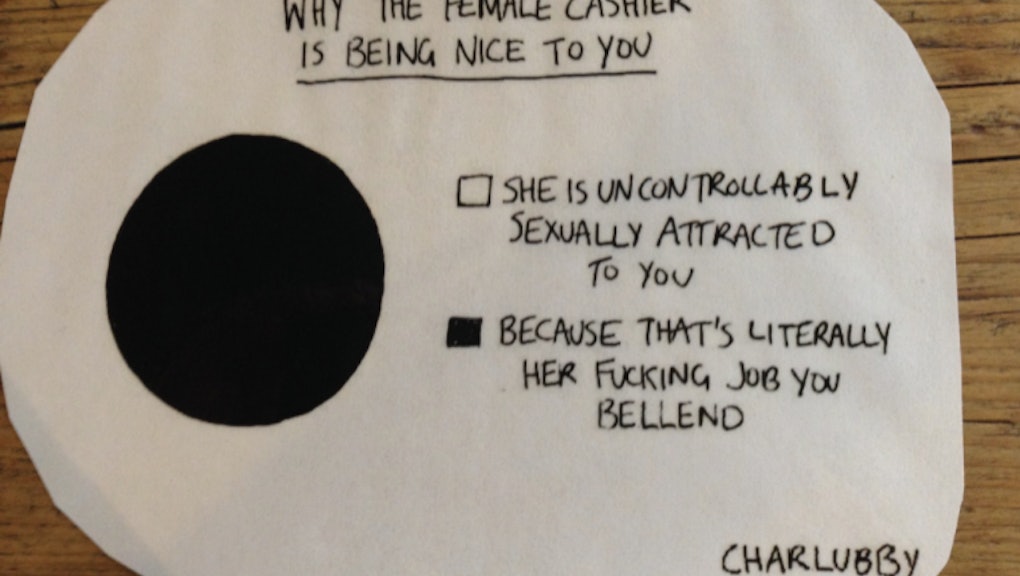 A bar in the United Kingdom has developed a handy sign to help customers differentiate between female bartenders' professional obligation to be polite vs. unbridled sexual desire for the men they are serving — because apparently this is confusing.

The sign, created by artist Charlotte Mullin, a.k.a. Charlubby, reads, "Why the female cashier is being nice to you," and then gives the reader options: "She is uncontrollably sexually attracted to you," or, "Because that's literally her fucking job you cretin." The latter box is checked.

The sassy sign is now enjoying a viral moment.

"This is definitely our favorite sign in the bar," England's Beer Cellar Exeter tweeted. "Also if dudes could stop trying to kiss our female bartender's hand that would be great."

Creepy behavior like what's described in the Beer Cellar's tweet runs rampant in the hospitality industry. According to a 2014 report from the Restaurant Opportunities Center United, the restaurant industry is "the single-largest source of sexual-harassment charges filed by women with the Equal Employment Opportunity Commission (EEOC)". Almost 80% of women working in restaurants report sexual harassment by customers, and nearly 70% have been sexually harassed by their managers.

Those figures are from the United States, of course, but the situation in the U.K. doesn't seem much better: A 2016 report from the Trade Unions Colleges found that 67% of women working in hospitality had weathered inappropriate sexual behavior in the workplace.

One former member of the hospitality industry, comedian and podcaster Marcia Belsky, praised Beer Cellar Exeter for the sign. "AHAHAHA I love you," she tweeted back. "Wish I had worked for more ppl like you when I was in service."

Many commenters shared Belsky's appreciation for the Beer Cellar's explainer, but some scoffed that women bartenders are often asking for the creepy behavior foisted upon them. The bar has kept a vigilant eye on comments and responded with aplomb.

Beer Cellar's due diligence did not stop there: After the bar became aware "that the word 'cretin' is ableist," for example, it corrected the word to "bellend," a pleasing Britishism for "dick head."