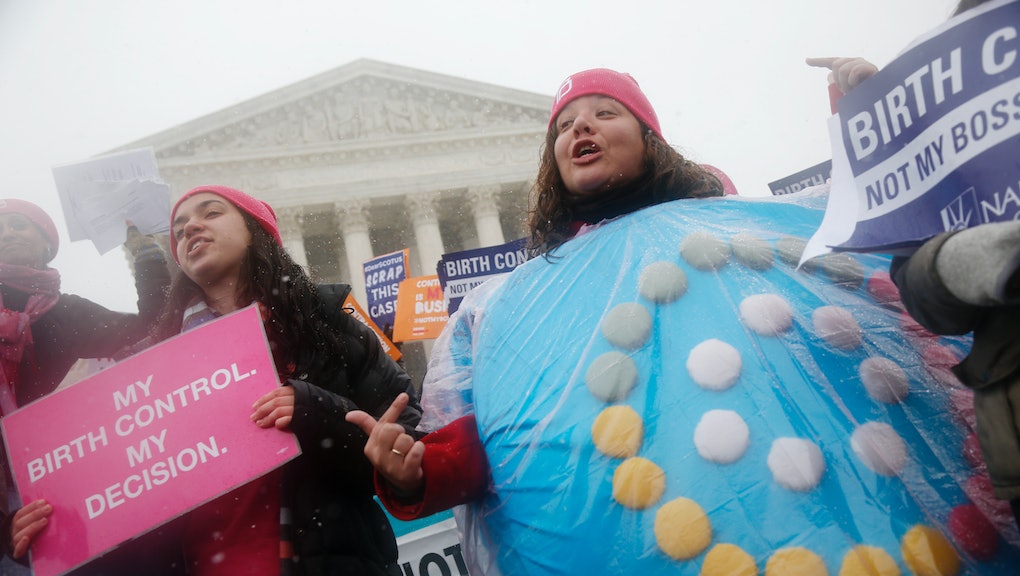 Vox published a leaked draft regulation, which is currently in its final phase of review with the White House Office of Management and Budget, on Wednesday. The rule would potentially exempt any employer from offering health insurance plans that cover contraception, expanding accommodations the Obama administration offered solely to religious houses of worship, as well as religious hospitals and universities, and "closely held," for-profit corporations.

"Think about it," Singiser said. "Under this rule, bosses will be able to impose their personal beliefs on their female employees' private medical decisions."

Thanks to the Affordable Care Act, insurers have to cover the cost of any FDA-approved birth control method. In its 2014 Hobby Lobby decision, the U.S. Supreme Court ruled that employers with strong religious beliefs could provide employees with health insurance plans that didn't pay for contraception, but the Obama administration countered with an allowance: These companies could file for exemptions, but through third party administrators, their insurers were still obligated to offer employees replacement plans that accounted for birth control.

Those accommodations didn't satisfy all religiously affiliated entities, however, some of which did not qualify for exemptions. There were also religious groups that balked at the idea of filling out the forms, which they believed implies some degree of support for contraceptive use. The Supreme Court called for a compromise on the issue, but none was achieved before the end of the Obama administration.

On Tuesday, Mic reported that a forthcoming rule would allow religious employers to opt out of employee contraceptive coverage entirely. The leaked draft rule, however, suggests that instead, the Trump administration will allow any employer — including health insurance companies — to apply for religious exemptions. As Vox reported, the White House maintains it doesn't know of any insurer that would file such a claim, but still, the option is on the table. And that means many women could start paying copays on birth control again.

That's unfortunate because, according to Singiser, the Obama-era birth control mandate "saved women an estimated $1.4 billion in its first year alone." It also seems to have translated to a 13% drop in national abortion rates between 2008 and 2011, according to the Guttmacher Institute. And, as Dr. Anne Davis, consulting medical director of Physicians for Reproductive Health, put it in a statement, "Employers should not interfere in what is a private decision by withholding insurance coverage." Period.