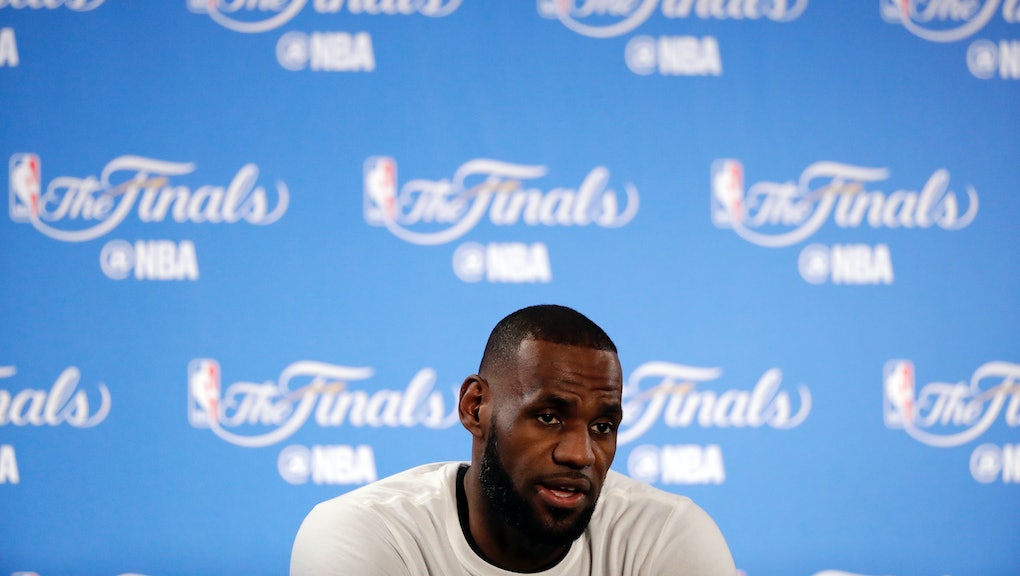 LeBron James appeared at a media conference Wednesday to address news that vandals had spray-painted the word "nigger" across the front gate of his Brentwood, California, home.

"It just goes to show that racism will always be a part of the world, a part of America," the Cleveland Cavaliers star said. "Hate in America, especially for African-Americans, is living every day."

James added that there was educational value in the incident regardless, shedding light, as it did, on how racism still persists in the United States.

"I think back to Emmett Till's mom ... and the reason that she had an open casket [funeral]," James said, "is because she wanted to show the world what her son went through as far as the hate crime and being black in America."

James has been one of the most outspoken athletes of our time when it comes to race — a low bar, considering some of his recent predecessors. Michael Jordan, who James is chasing for the title of "greatest basketball player of all time," famously rejected politics for fear of how they might damage his brand.

James has been less reserved than Jordan. But when it comes to risking his livelihood in the name of racial justice, he too has often demurred. Decades after Muhammad Ali had his boxing license stripped for refusing the draft, and John Carlos and Tommie Smith had their Olympic medals revoked for raising their fists on the medal podium, James' commentary looks tame in comparison. And activists still remember how, when they urged James to take action on one of the banner incidents of racial violence of the last five years, he declined to do so.

James has been celebrated widely for his political statements. In 2012, he participated in a photo shoot with his Miami Heat teammates expressing solidarity with Trayvon Martin, the black 17-year-old shot and killed by vigilante George Zimmerman in Florida. In 2014, he joined several other NBA players wearing T-shirts that read, "I can't breathe," in solidarity with Eric Garner, who was killed by New York City police.

And in an essay he wrote for Sports Illustrated in 2014, James outlined what he saw as his obligation to underserved communities.

"I feel my calling here goes above basketball," he wrote, citing the children in northeast Ohio he supports through his foundation's education initiatives.

But then there's Tamir Rice. In November 2014, the 12-year-old black boy was playing with an airsoft pistol at a recreation center in Cleveland, the city where James plays. Two police officers — Timothy Loehmann and Frank Garmback — pulled up next to him in their patrol car, and Loehmann shot and killed him. When a grand jury decided not to indict either officer for Rice's death, activists called on James to stop playing in protest. James declined.

"For me, I’ve always been a guy who’s took pride in knowledge of every situation that I've ever spoke on," James said, according to ESPN. "And to be honest, I haven’t really been on top of this issue."

It's hard to believe James was ignorant on this topic. Rice's death was central to the national protest movement sparked by the killings of Michael Brown and Eric Garner, who James did comment on. What's more, he had plenty of time to learn the basics after being asked about it, and respond accordingly. Black Lives Matter Cleveland even stated Thursday that they were open to having a dialogue with James about anti-black violence more broadly.

But calls from activists and Rice's family continue in vain.

"I think it’s quite sad that LeBron hasn’t spoken out about my son," Samaria Rice said in an interview with NewsOne in 2016. "I know his kids got to eat too, but you can at least put on a shirt or something. Some of the other athletes, some of them have said something, some of them haven’t. I think they should just make a statement. I'm not asking nobody to quit their job or anything, but make a statement for us black people out here."

It's not unheard of for athletes to withold their talents to protest inequity. One of the galvanizing moments of the Mizzou campus protests that got University of Missouri system president Tim Wolfe to step down in 2015 was when the school's football team refused to play. Nor is it unheard of for athletes to make bigger indictments of systemic racism. Former San Francisco 49ers quarterback Colin Kaepernick has become persona non grata on NFL rosters because he chose to kneel during the national anthem this season to protest police violence against black people.

Athletes risk losing wealth, fame and public favor for speaking out on controversial topics. As a result, they rarely do so and our expectations of them remain low. We even excuse their silence. Would we speak out ourselves if such vast privilege was at stake? But if athletes merely acknowledging the fact of racism is enough to earn praise, then we are not asking enough of them. Speaking out like James did is just the first step. But sacrifice is where real change starts.