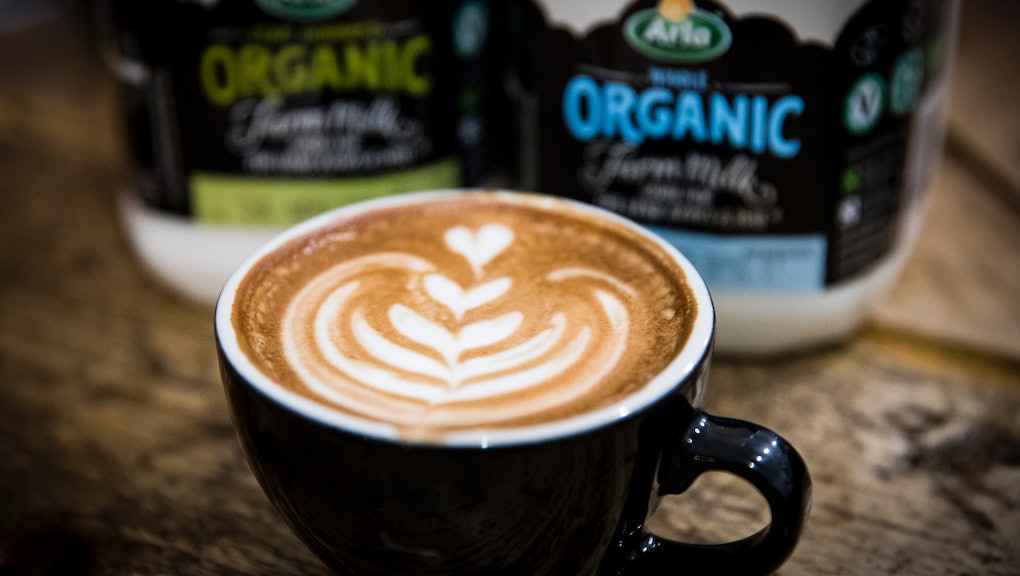 Coffee has some serious health benefits — here's how to maximize them

It's 10:30 a.m. on a weekday and you're already working on your third cup of coffee. You know that caffeine doesn't just help keep you from curling up under your desk and taking a nap — it makes you more productive in the long run.

Researchers know all this too. According to one review of scientific research on caffeine, published in the journal Nutrition, caffeine — coffee's not-so-secret weapon — improves focus, problem-solving skills, reaction time, decision accuracy and general cognitive function. Plus, it decreases mental fatigue.

But you might not know that caffeine doesn't actually boost energy levels. Rather, caffeine blocks your body's adenosine receptors, so you feel as if you have more energy, Georgie Fear, registered dietitian and author of Lean Habits for Lifelong Weight Loss, said in an email. "When active, your adenosine receptors perform essential functions related to sleep and suppressing arousal. So by blocking this 'chill out' pathway, the central nervous system is stimulated."

And, caffeine aside, most people underestimate the fact that coffee hydrates you — just as well as water, according to a 2014 study from University of Birmingham researchers in the U.K. That hydration can only help your brain cells do their thing, said Bonnie Taub-Dix, a registered dietitian and the author of Read It Before You Eat It.

What’s more, the antioxidants and various compounds in coffee appear to have long-term benefits for cognitive function: Research published in the Journal of Alzheimer's Disease shows that drinking three cups of coffee per day can delay the onset of dementia in people who are already starting to suffer from memory problems.

To maximize the benefits of your coffee, follow the expert-approved coffee-drinking guidelines below.

Caffeine's effects begin to set in within 15 minutes of consumption — and hit full force after about an hour, Fear explained. That makes first thing in the morning, before you've even gotten through the shower, the perfect time to drink your java. That way, you're on your A game as soon as you sit down at your desk.

Plus, by getting your caffeine ASAP in the morning, you lower the likelihood that your coffee habit will interfere with your sleep. "While caffeine can help you think sharp and maximize your creativity, becoming sleep-deprived will do the exact opposite, tanking your mental ability," Fear said.

For most people, 50 milligrams of caffeine is all it takes to get a mental perk, according to Fear. But if you have a high tolerance for the stimulant, you may need more to feel like you’re at your best. "If you currently don't drink coffee, see how you feel with a single espresso, which contains 75 milligrams, or an 8-ounce, small cup of brewed coffee, which contains about 100 milligrams," she said.

What’s more, light roasts actually contain more caffeine than dark roasts, so try out dark roasts first, Fear suggested. And while packets of sugar and whipped topping can make that dark roast taste a little lighter, try to minimize the extras, since the last thing your brain needs is a sugar crash during an important meeting.

While caffeine consumption earlier in the day is still always better, it's worth noting that the half-life of caffeine is about three to six hours. So if you drink your first cup at 6 a.m., you very well may need a "booster dose" between 9 a.m. and noon, Fear said.

Meanwhile, although some people can sleep fine even if they drink coffee at 4 p.m., others will toss and turn if coffee hits their lips after 11 a.m., Taub-Dix said. Exactly how you time your second, third or, dare we say it, fourth cup depends on how coffee affects you.

Similarly, some people are way more sensitive to caffeine than others are, and post-cup, they feel more jittery and scatterbrained than productive, Taub-Dix said. For instance, people who have a tendency toward being anxious may want to drink less caffeine to prevent exacerbating anxiety levels that make it impossible to focus on, say, Excel sheets.