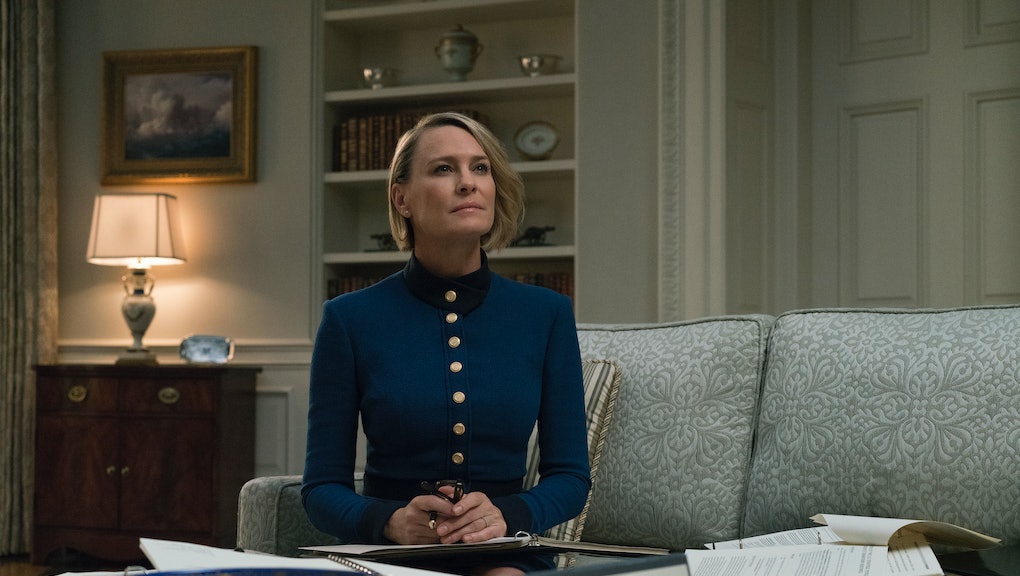 'House of Cards' Season 5: What Claire breaking the fourth wall means for the series' future

Season five marks a turning point in the House of Cards storyline as Frank Underwood sees his chance to be re-elected president slowly slip away. The spotlight turns more toward Claire Underwood's political aspirations when the House of Representatives appoints her acting president.

Viewers saw an early sign of this shift in a trailer for season five, when Claire broke the fourth wall and faced the audience as she made an address to the public.

"My husband and I want to protect you," she said. "In two weeks' time, you will be heading to the ballot box to decide what kind of country you want to live in. It's a profound choice, but no matter who wins this election, we're going to need to work together."

But it wasn't exactly clear how powerful she would become in the season ahead. In episode 11, Claire turned to the audience again and began giving us clues she may be revealing more personal thoughts to the audience in the future:

Just to be clear, it's not that I haven't always known you were there. It's that I have mixed feelings about you. I question your intentions. And I'm ambivalent about attention. But don't take it personally. It's how I feel about most everybody.

In the season finale, Claire officially steps further into power. While standing in the Oval Office, she receives an incoming phone call from Frank. Some may have expected her to accept the call, but she declines. She then turns to the camera and strongly proclaims, "My turn."

From the beginning of House of Cards, Frank did all the talking to the audience, filling them in on his innermost thoughts on the decisions related to his administration and relationships.

It's about time Claire's reign happened. The lingering question is whether she will be more ruthless in power than her husband.