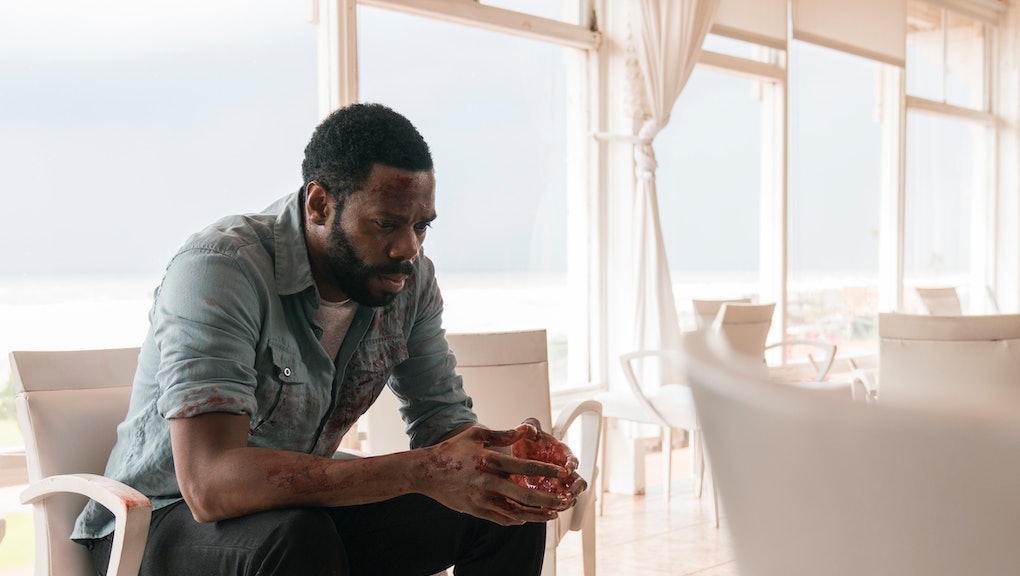 In the post-apocalyptic world of The Walking Dead and its spinoff Fear the Walking Dead, there are very clear distinctions between good and evil. On The Walking Dead proper, the creators never obscure who the heroes of the story are — even if they, on occasion, make reprehensible choices. You're supposed to root for Rick Grimes and the Alexandrians.

That basic conceit is what makes Fear the Walking Dead's Victor Strand, played by Colman Domingo, such a fascinating character. He's the closest thing either series has to a morally ambiguous presence — someone who is inherently unpredictable and hard to read. In the show's second season, he maroons two survivors in the middle of the ocean on the basis that you can't trust people anymore. But we also learn he's hell-bent on returning to Mexico to reunite with his lover, Thomas Abigail, played by Dougray Scott.

Unfortunately for Strand, Abigail succumbs to a zombie bite when the group arrives in Mexico. Strand considers killing himself after Abigail turns, but he chooses to continue living. As seen through pre-apocalypse flashbacks and his interactions with the show's main protagonists — the Clark family — self-preservation has always been Strand's mantra. But his actions in the season three premiere suggest Strand is developing a sense of empathy. He helps those who seek refuge in the zombie-free Rosarito Beach Hotel, aiding survivors by tending to their wounds and even delivering a baby. Is Strand still ultimately looking out for himself, or is this compassionate streak going to stick?

In a phone interview with Mic, Domingo discussed Strand's journey, the character's sexuality, the premiere's shocking death and what to expect in season three. This interview has been edited and condensed for clarity.

Mic: When we catch up with Strand this season, he’s still at the hotel — and now he's acting as a doctor tending to the injured. This feels like a far cry from the man we met in season one. What's changed for him?

Colman Domingo: In the premiere, Strand is reassessing clemency and what is the most valuable thing right now. What do you do in the moment? Season two was a deconstruction of Victor Strand, we got to understand more of his inner workings. Now, in season three, he's coming out and he’s trying to keep control in many ways.

One thing that I thought was very interesting is that no one knew that Victor Strand spoke Spanish [before the premiere]. It makes sense — he has that compound in Mexico, it would’ve made perfect sense. But I love that he kept that knowledge to himself until he could use it. So he starts leaping at the gate in season three, trying to find a way to get on top. There's this refugee crisis that is happening, overtaking the Rosarito Beach Hotel.

He understands what people need the most, and that's medical care. So he decides to say that he's a doctor, and he's going to use it as long as he can to seize some control. Until he can find out that next step — and that next step is [keys to a working car] given to him by someone that tried to take his life, which I think is interesting. The person who was once your foe is now trying to be your friend at the same time.

I want to talk about your scene opposite Brenda Strong as Ilene, who nearly killed you last season. You’ve got Strand talking to her about hope — hope for humanity — after he delivers a baby in this post-apocalyptic world. But her character basically responds that we're all doomed, there will be no future generations, and then she jumps off a balcony. After seeing that, does Strand still hold onto that hope?

CD: I think that hope is always a challenge. I think that, knowing that Victor Strand — I'm going to go way back — had a plan for the apocalypse early on, always showed that he was a hopeful person and a person who believed that he would come out on top. So I think that's always been a strength for him. Even when he's stabbed and nearly dies, you know, he recovers and he's witnessed a birth. And that is the biggest gift that anyone can receive, especially in this world: a baby.

Hope and despair kind of come hand in hand now, and I think he understands that. I think it's a very interesting situation for him to be in.

Strand is quite an enigma, and there are few characters in The Walking Dead universe who truly fall in this moral gray area. How much of his backstory was detailed to you when you signed on in season one?

CD: The only thing I knew about Victor Strand is that he is a self-made man. I believed that he either had a daughter named Abigail or a wife. We see early on that he's a fantastic wordsmith, that his most powerful trait was his intelligence and how he can manipulate a situation and make it advantageous for himself. How he, in a strange way, is kind of a psychologist. *laughs*

In season two, we really get to his inner workings, what makes him tick. What made him afraid. What his vulnerabilities were. How sensitive he was, you know? He cared deeply — he had the capacity to care deeply about another human being. We understood that a lot of his actions weren't just because he was some sort of sociopath; they were always very calculated. [Strand was] taking care of others, in some way, as selfish as he might have been.

I think now, in season three, we're back to Strand's strengths. And once again, those strengths can be used for good or for evil. He's looking at what's advantageous, not only for himself, but also for the group. It's all about survival. Sometimes he has to make a choice that's not only beneficial for himself, but for others as well. But others are going with a whole different set of principles based on emotions, and that's something that he does not respond to. So it's gotta be something practical, he's a pragmatist.

Going off that, that he cares for another human being, we learn he was driven to be with his lover, Thomas Abigail. As an out gay man yourself — and as someone who has been recognized by GLAAD for your one-man Broadway play, A Boy and His Soul — did you have any input on the character with the showrunners?

CD: When I found out that Abigail was going to be a man, the first thing I thought was, "Cool, that's great." And that change happened between season one and season two. I thought what was interesting about it, Victor Strand diverts from many of the tropes of what society might perceive as a gay male — especially on television.

He's not the funny best friend. He's a very complex man in every single way. That's what I loved about him. When you finally get into that he's in a same-sex relationship, it was just another bubble in this vast ocean of a man. It was just a part of him.

Victor Strand is a very unusual and unique male who — yes, he's in love with Thomas Abigail, but he easily could've been with a Karen Abigail. He operates on very relatable principles with relationships, bonds, family. I think that's a character that's not only unique to The Walking Dead universe, but for television in general. It made an impact, showing a spotlight on who we are, with all our complexities as gay men and women.

The timing of this new season — and the fact it takes place around the Mexican border — is obviously quite relevant. Fear the Walking Dead is not as on-the-nose as something like The Handmaid's Tale, but this season is still a bit politically charged. Did real-life politics have any influence on how you guys approached season three?

CD: It was always going to be a border story, this season. In fact, before the election, this is something we were leading toward in the storytelling of it. Hopefully a show like Fear the Walking Dead can hold a mirror up to society and our ills and what we're struggling with.

So it does make sense that it mirrors society, because that's exactly what we want to portray. The world has sort of been turned upside down. I like the idea of having a border story when there are no borders anymore, and where people are trying to survive — they just want food and shelter.

It's just echoing what's happening in the world. I don't think it's been intentional, but I think it's always in the zeitgeist — with our writing team and what they’re interested in and what we’re struggling with in our humanity. It makes sense that it's a parallel.

Even though you're separated from the Clark family, I'm sure you know about Travis' fate in the premiere. It totally caught me off guard. How did you react to the show killing off one of its main characters — and even unceremoniously at that?

CD: I think it showed us the nature of the universe. As actors, we sign on for the story, and we want our characters to survive for as long as the story allows. For Travis to go within the first couple episodes, it's a jolt and a shock, of course. Not only as human beings, but as the characters as well.

And also the company. You know, we've been together since season one and we've really become a family. So we're reeling for a moment because we love [Cliff Curtis, who plays Travis], but we understand it's part of the storyline. And Cliff is already moving on to some fantastic opportunities, so we know it's never personal and it's always for the benefit of the show. That's just the world that we're in, where anyone can go at any time. But hopefully Victor Strand can stick around for a long time, because I love being a part of it. *laughs*

Strand's now left the hotel at the end of the premiere, hitting the road in a fancy, shiny Jaguar no less. What can you tell us about his character's journey this season? Should we expect a reunion with the Clark family or any other familiar faces?

CD: Strand is on his way into the new world with a green Jaguar that's been gifted to him. So he feels like he's on top of this world, but he may not be on top for long. At any point, things could be compromised.

I think that they're all headed north. Why? Because north is where home was. It's a natural instinct, for these characters to move north. And hopefully, you're gonna have some converging of some of the characters, in some way, shape or form.