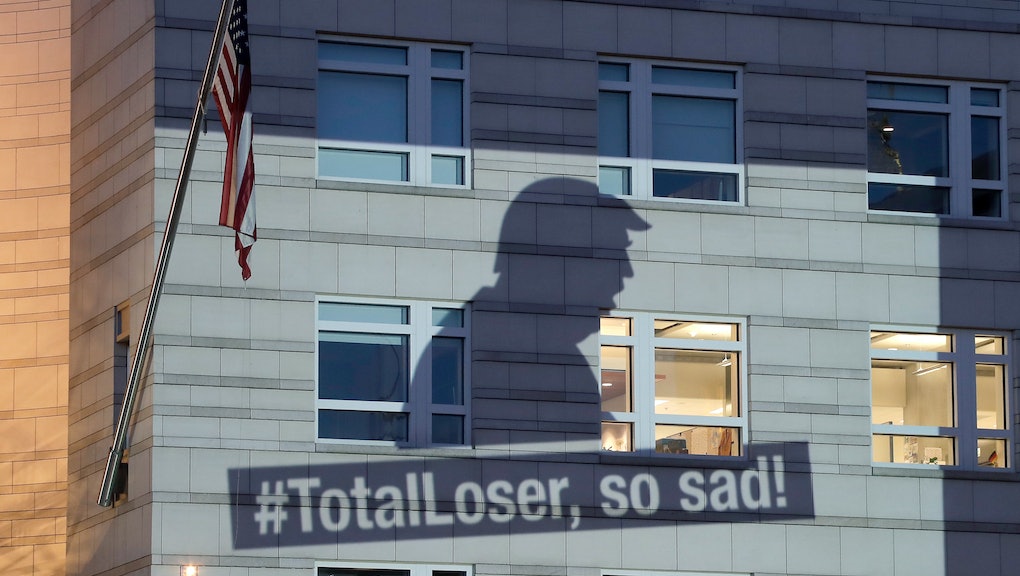 On Thursday, President Donald Trump announced that the United States would be leaving the historic Paris climate agreement — an international agreement to fight the devastating effects of climate change, signed by 195 countries.

Reaction to the decision was swift and critical — and environmental group Greenpeace made its feelings clear by projecting a message to Trump onto the side of the U.S. Embassy building in Berlin, and they never even had to use his name.

The image, a silhouette of Trump along with the message "#TotalLoser, so sad!" quickly spread on social media.

But the image at the U.S. Embassy in Berlin wasn't the only sign that activists and lawmakers across the globe were outraged at Trump's decision to back away from the U.S. commitment to fighting climate change.

An image retweeted by Greenpeace showed demonstrators rallying outside of the U.S. Embassy in Madrid on Friday. And across the world — as well here in the U.S. — landmarks were lit up green after Trump's announcement to symbolize support for the Paris agreement.

News outlets showed their displeasure too — a German tabloid ran a front page headline that translates to, "Earth to Trump: Fuck you." Harry Potter author J.K. Rowing, an outspoken critic of Trump, tweeted an image of that front page Friday saying that she was "Very much enjoying the German press at the moment."