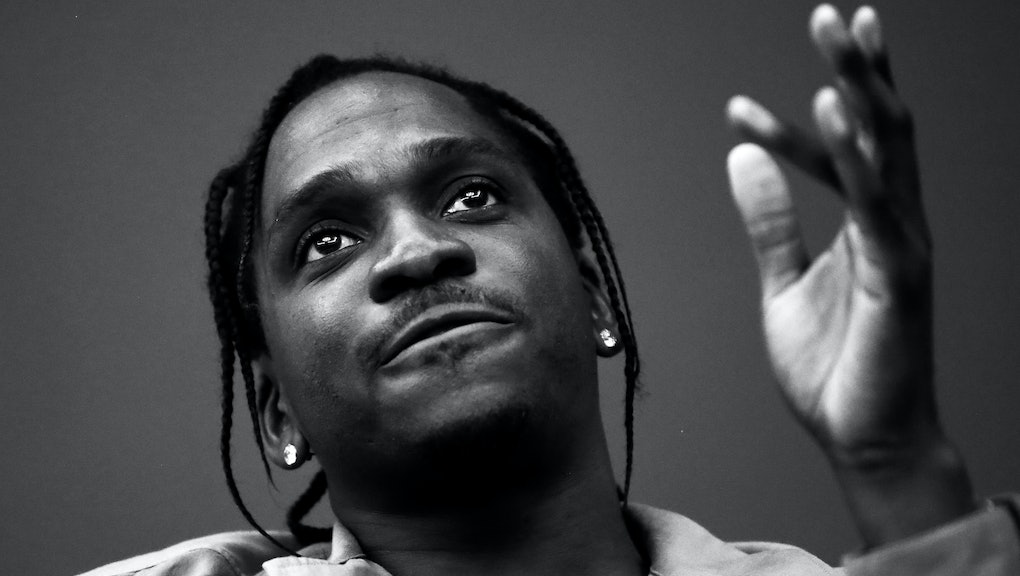 Pusha T calls for end to gun violence: "Kids can't feel like this."

On May 15, 6-year-old Jeffrey "Lil J" Laney sent out a plea for peace via his mother's Facebook account. "People need to stop killing each other around [here] because it's just making me feel bad," he said. "I'm really scared to die and I'm really scared for my family to die."

His four-minute message, describing the fear he's felt since seeing his mother's 16-year-old cousin killed in a drive-by shooting outside his St. Louis school in April, has since been viewed more than 209,000 times and been covered by dozens of mainstream outlets. It also caught the attention of rapper Pusha T, president of Kanye West's G.O.O.D. Music label, who's since been moved to amplify Lil J's call.

"It sort of shocked me that a 6-year-old was so well-spoken about violence," Pusha T said in a phone interview. "Watching him try to get his point across and basically pleading with the world — I was like, 'You can't ignore this.'"

On Friday, the rapper and one half of the now-defunct rap duo Clipse, shared a screen shot of a letter he recently sent to Lil J via his Instagram. In it, he attempts to reassure the young boy that there is a life worth living beyond this violence. In an excerpt, Pusha wrote:

"As someone who’s familiar with places not too different from where you are, please believe me, your options are endless and there is so much more to the world than your neighborhood. You have your life in front of you and you should enjoy every moment of it, and more importantly LOOK FORWARD, not behind you or around you and worry."

In addition to the letter, Pusha will be providing Lil J with a host of fun summer activities in an attempt to take the youngster's mind of off the violence in his home city. He'll be sending Lil J to the Six Flags amusement park in St. Louis with his cousins, summer camp at the Boys & Girls Club, a collection of toys and a college fund to help secure him a path to success.

But this effort is about more than just supporting the future of one mature and thoughtful child. Pusha wants this moment to serve as a wake-up call for communities across the country. He sees this act as an extension of his work with President Barack Obama's My Brother's Keeper program, which launched in 2014 and has looked to address disparities in the criminal justice system and provide mentorship to boys and young men of color. That program's campaign continues through the My Brother's Keeper Alliance.

"Not rightfully, in any way, shape or form, can you ignore what he is saying." — Pusha T

We spoke with Pusha T on the eve of his sending the letter and care package to Jefferey, to let him speak about the inspiration behind this call to end violence. He discussed the increased need for community activism and individual responsibility now that Donald Trump's in the White House, as well as how his upcoming music has been shaped by his own activism, which includes working with Hilary Clinton during her campaign to highlight policing and criminal justice reform. This interview has been edited and condensed for clarity.

Mic: At several different points during your letter you stress the need for Lil J to just "enjoy being six." Why do you feel that's important?

Pusha T: Your childhood, your youth is something I feel like you should cherish. Even myself, I remember me wanting things at six years old — me wanting to follow in my older brother's footsteps, me wanting to play basketball, me emulating super heroes — playfully, you know. Never, never did I have something so serious to speak out against. I don't remember feeling like him. I'm not even going to cheapen what he has going on by comparing my childhood to his.

What inspired this initiative? What needs to change in Lil J's neighborhood and those like his?

PT: Since the election of Trump, I personally have been thinking, "What can we do now?" Last year, I had been to the White House three times, with Obama, with My Brother's Keeper program, having conversations like this. Needless to say, since Trump has been in office, this has totally stopped. There is no connection with that administration for me.

The Lil J thing made me realize how much we need to be, as a community, a bit more self-governing. There's a 21-year-old and 18-year-old in that community that knows exactly what he's talking about. And it should be up to them to acknowledge it, address it and keep the youth safe and motivated. I don't live where he lives at, but it spoke to me.

In past interviews, you've described yourself as growing up "desensitized" and that you've gotten re-sensitized as you've gotten older. I feel like that's what we're seeing from you here. What can you tell us about that whole process?

PT: During the time in which I came up, when I talk about being desensitized, I came up during the drug era, the crack era. By the time I got to high school, selling drugs was a just a form of mischief that was participated in by me and my peers. Never did we consider the consequences — a lot of my friends' parents were on drugs. My family members were on drugs. The older people did the drugs. The younger people sold the drugs. Thinking back now, I really felt like I was desensitized to the norm.

Being a part of programs like #SchoolsNotPrisons and getting to see the effects of that time period — these guys have been in jail from laws built to combat how crazy that time was. A lot of these people have been treated unfairly and unjustly sentenced because of the crackdown on neighborhoods that we were so familiar with. I had to re-sensitize myself. What I thought was normal was not normal, and I'm getting to see these guys behind prison walls. It made me hyper-sensitive. And I just remember everything that I participated in that they ended up getting caught for.

Looking at the way that Donald Trump has been talking about these neighborhoods and inner-city violence, it's a completely different tone from how Obama approached the issue. He's been calling Chicago a "war zone," and his attorney general has been calling for even tougher sentencing for nonviolent drug offenders. How do you feel about that rhetoric? How does that affect the conversation surrounding these issues?

PT: That rhetoric is just another plan to keep poor people, low-income, minorities in a prison mind state. I feel like the people you just mentioned, they don't have a concern for the people of these communities. And at this point, their only concern is making money off them through private prisons and things of that magnitude. It's just a plan for destruction, to me.

That's part of what drew me to your initiatives, like your work with My Brother's Keeper and this call to action. I feel like finding moments like this and trying to create a real sense of caring are going to be very important going forward.

PT: We gotta really start caring. We really do. I don't want "self-governing" to sound so heavy. You know what I'm saying? It's really about taking a role in your community and being accountable.

Accountable in what sense? Can you elaborate on that?

PT: I feel like in our communities, we need to be accountable for the destruction that goes on in the community. We need to be accountable for the lives that are definitely influenced by the hierarchy of what's going on in the community causes. Lil J is six years old. There are definitely teenagers, young adults, men, who he's pleading with right now. Why shouldn't they listen? How can you ignore that? You can't ignore that. Not rightfully, in any way, shape or form, can you ignore what he is saying. Those people have to stand up and admit wrong, and admit some level of change. I'm starting here. They can start within the community. Kids can't feel like this.

What can you tell us about your upcoming music? How has your approach to music changed since you started engaging in these programs like Schools Not Prisons and My Brother's Keeper?

PT: My music has always been based around the realities of life, harsh or not. My music has grown with me. Like I said, the truth is the truth. When I can't speak truth in music then I shouldn't do music anymore. If we want the truth to be pretty then we gotta do some community fixing on all levels.