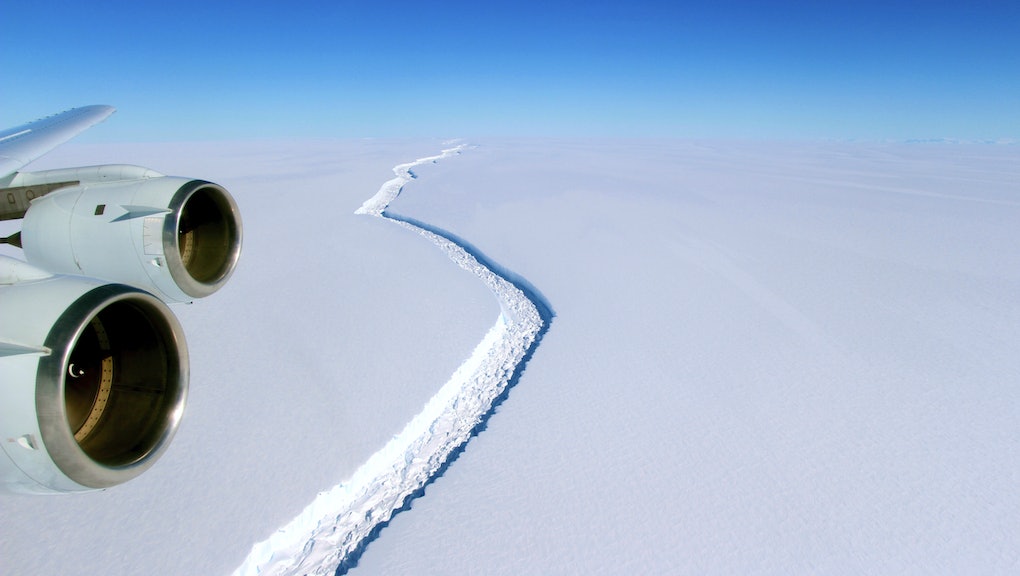 Larsen C: What is happening to the massive ice shelf in Antarctica?

President Donald Trump on Thursday announced his decision to withdraw the U.S. from the historic Paris climate agreement. Thousand of miles away in Antarctica, the devastating effects of climate change were making themselves abundantly clear.

Scientists at Project MIDAS tracking the Larsen C ice shelf reported that a rift in the ice shelf grew by an additional 17 kilometers, or 11 miles, between May 25 and May 31.

It's just the latest period of rapid growth for the rift, which previously grew by 10 kilometers in January and 18 kilometers in the second half of December 2016.

The rapidly-growing rift is now 13 kilometers, or 8 miles, away from breaking through to the front of the ice shelf, Project MIDAS reports. That will produce one of the largest icebergs ever recorded; according to CNN, the new ice mass will be 5,000 square kilometers, or 1,930 square miles — roughly the size of Delaware.

This event is expected to happen soon. Project MIDAS's scientists note that because the rift is taking a turn towards the front of the ice shelf, the time of the iceberg's calving is "probably very close."

Once it breaks off, this new iceberg will cause Larsen C to lose more than 10% of its area, which "will fundamentally change the landscape of the Antarctic Peninsula," according to Project MIDAS scientists.

Though pieces of ice shelves break off regularly, Larsen C could follow in the footsteps of neighboring ice shelf Larsen B, which collapsed in 2002 after an iceberg broke off in a similar fashion, ABC News noted.

"The ice shelf can and probably will undergo a rapid collapse," Poul Christoffersen of the Scott Polar Research Institute at the University of Cambridge told CNN. "And this isn't a slow process — it can happen in a day or two."

It's expected that icebergs in the Antarctic will break off like this, but Christoffersen explained that global warming is helping to accelerate the process. Warming ocean temperatures cause the ice shelves to become thinner, which speeds up these rifts' development and makes it less likely for any lost ice to regrow.

Though the iceberg itself won't have much of an effect, Larsen C's potential collapse could cause global sea levels to rise, ABC News noted. When Larsen B collapsed, the glaciers that fed into the ice shelf released their ice into the ocean instead at an accelerated rate — which could soon be the case with Larsen C.

“You can think of the Larsen or really any ice shelf like it is a cork in the neck of a champagne bottle lying on its side,” Christopher Shuman of NASA’s Goddard Space Flight Center told NASA's Earth Observatory in February. “Once you pop that cork, the wine inside—all that glacial ice sitting on land—will start flowing out."