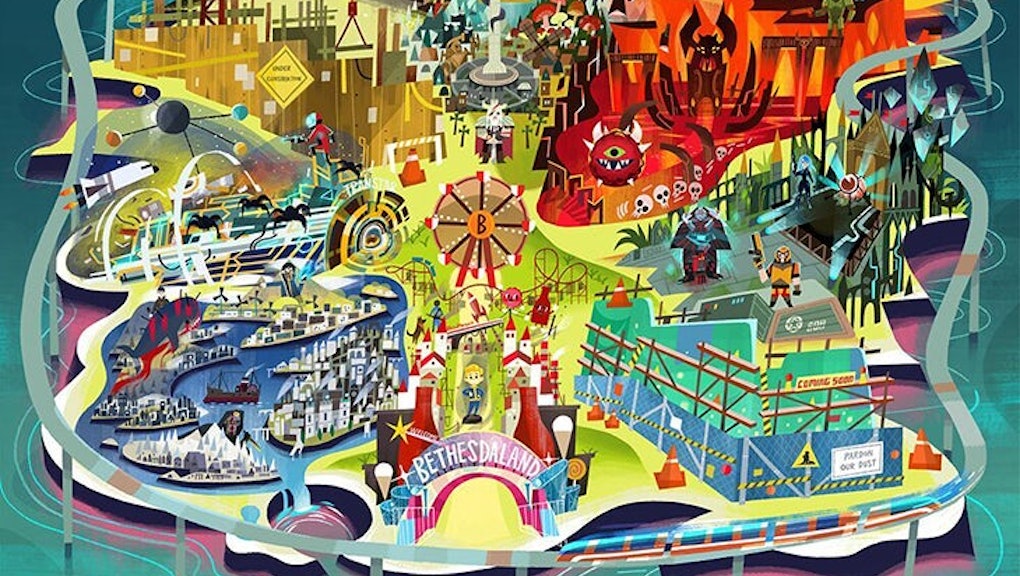 Bethesda E3 leak 2017: Will 'Starfield' or 'Fallout' make an appearance at its E3 events?

The Electronic Entertainment Expo (E3) takes place in a week and a half, and that means it's that special time of year where we get to try and separate the "leaks" from the actual leaks. Bethesda Game Studios is one of the most popular game developers in the world, so it's no surprise that there's a ton of speculation on what it'll be showcasing at this year's E3. We're already seeing preliminary claims of leaks on various haunts of the web, but whether any of it is true or not is anyone's guess.

Below we've posted one of the more convincing (or at least elaborate) "leaks." We won't know whether it's entirely made up or has any substance until E3, but hey, the Nintendo Switch reveal event was leaked on 4chan so why not Bethesda E3 leaks?

June 1, someone claiming to work at or have privileged info about Bethesda Game Studios posted a ton of claims on 4chan about Bethesda's E3 2017 reveals. They also posted info on its plans far beyond E3, including a narrative tie-in of the Elder Scrolls, Fallout and a new sci-fi RPG series called Starfield.

I'm a leaker at Bethesda, and I wanted to lay out their plans for the future for you guys and give you some pre-E3 leaks.

Firstly I'm speaking only about Bethesda game studios here, not the publisher.

There will be a few announcements at E3. One is a new major title from Bethesda themselves as well.

The two major announcements are Fallout 4 VR and Starfield.

They are working on Skyrim VR as well, but they aren't sure if they are going to show it yet since they don't want to take the light away from Fallout 4 VR or Starfield.

The game is going to be a sci-fi open world RPG in typical Bethesda first person fashion. It's going to feature five to 10 races. There's still some debate on what should and shouldn't go in and takes place in the Fallout universe just so far in the future and far away from Earth that it'll only be mentioned in hints. This is part of an ongoing planned interconnected universe of every Bethesda franchise. They gave hints of this by implying the Brotherhood of Steel created nirnroot in Fallout 4. They're getting a little wacky with the lore and using "Elder Scrolls time wounds" to justify lore inconsistencies.

Basically, Fallout is the beginning of the timeline, Starfield is the middle, and Elder Scrolls is Far Future.

The game will feature space travel and hub worlds as well as RNG worlds. It's meant to be a test into more sandbox/Minecraft-ish AAA thing but with Bethesda gameplay and still actual designed worlds/quests/etc.

They have another Fantasy game of a famous franchise in the works. Game of Thrones and pre-production Elder Scrolls VI and conceptual for Elder Scrolls VII, which is Todd's Magnum Opus.

Normally, I would completely dismiss anything I see on 4chan, but recently, a leaker there gave info on the full line-up of the Nintendo Switch reveal event with much more accuracy than more "reputable" sources were able to. Therefore, as fantastical as all this sounds, there's a chance it could be true.

The important thing about these leaks is that it gives us a foundation for something to take away some of the monotony of watching press conferences all week. Yes, it's time for E3 prediction Bingo, and you at home can play with us with the card below.

All you have to do to play is to print this card out, and tune into Bethesda's E3 on Sunday, June 11 at 10 p.m. EDT. If something happens that's on the card, mark it down. Take note though; there are no free spaces in this Bingo. You have to earn those squares.

If you get four in a row, just keep playing. It doesn't matter if you win anyway because we're just going to have to wait six more months for anything that's announced. There are no winners in E3 prediction Bingo.

Check out more video game content on Mic. Including which Pokémon are actually the best and why black players can never seem to get custom characters that look like them. Learn more about how blind gamers are getting in on the fun and how Injustice 2 seems to give its female characters the short end of the stick. See why we love Twintelle (and why we hate Twintelle) in the upcoming Arms, and don't miss our guide to dodging blue in the Mario Kart 8 Deluxe — you can thank us later.