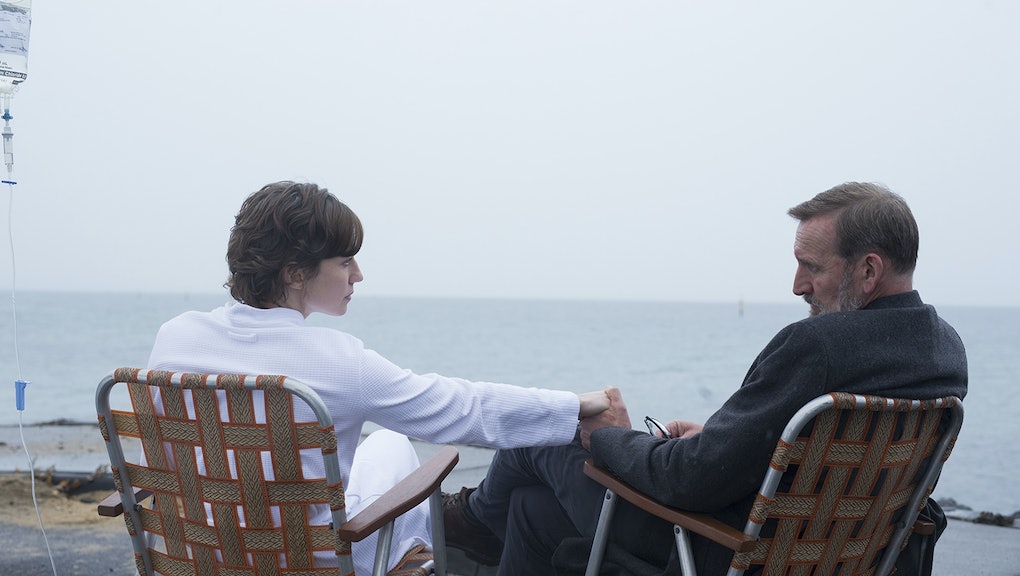 The synopsis provided for the series finale of The Leftovers is, I kid you not, "Nothing is answered. Everything is answered. And then it ends." This is of course very tongue-in-cheek from showrunner Damon Lindelof, whose previous series, Lost, didn't satisfy the masses with its finale because it failed to answer all of the show's lingering questions. But The Leftovers' series finale, "The Book of Nora," answers nothing, yet answers everything. When it ends, it is perfect. It may go down as the greatest series finale ever made. (Yeah, I said it.)

"The Book of Nora" is, in essence, a rekindling love story for Nora and Kevin, somewhere in rural Australia, at least a decade in the future. But you can excuse yourself if you initially thought this "future" was some type of purgatorial dreamscape; that Nora's idyllic home was her version of being an international assassin at a luxury hotel (or, as in the penultimate episode, being both the president of the United States and his identical twin, both of whom have gargantuan penises). Going to one such potential dreamscape is Nora's goal when she opts to enter the machine that will supposedly transport her to the dimension where her children live. We see her enter the chamber, which fills up with fluid that almost reaches her mouth when she blurts out something that seemingly starts with an "S." (I think she said "Stop!" but it's genuinely hard to tell.)

If Nora is in another world, that would explain why an older Kevin knocks on her door, with no recollection of living in Jarden, their relationship or taking a trip Down Under that ends with a disastrous breakup in a hotel. This Kevin has puppy-dog eyes and — despite only seeing her once or twice — wants to take her to a dance at the center of town after spotting her riding her bike.

It's too good to be true. Nora knows this, because the nun in town told her a man named Kevin asked about her, and carried a photo of her. Laurie also finds this odd (yes, Laurie is alive and Nora is calling her now and then, technically as a patient). But Laurie knows that Nora, just by calling her and mentioning the dance, wants to go to it.

So Nora, despite her best resolve — and this includes essentially trapping herself in a bathroom — goes to the dance. And even something as simple as a town dance is skewed for the viewer. Kevin doesn't tell her it's a wedding, one where everyone's dressed up and wearing beads around their neck. Again, Kevin is insistent that he doesn't remember anything outside of a few chance meetings with Nora, to the point that he feels weirded out that Nora remembers his children's names. But Nora lets down her guard long enough to dance with him.

It's in that moment I no longer bought Kevin's hyper-specific amnesia (to say nothing of Justin Theroux's incredible, raw performance). The moment Kevin and Nora embrace is an emotional catharsis, which would feel inherently wrong if Kevin didn't actually remember their relationship. But they both imbue a swirl of emotions: relief, confusion, tranquility, and for a moment, happiness. "How did you find me, Kevin?" Nora asks again. Without an honest answer, Nora leaves him.

Everything in "The Book of Nora" is about perception. Kevin wants Nora to remember him as the man in Mapleton who sparked undeniable chemistry with her. Matt, in his final moments with Nora before she enters the chamber, is afraid of whether his son will remember him if and when his cancer kills him. Nora wants to appear detached, from Kevin's surprise appearance in Australia and from life in general. For Nora, that may even extend to her journey to see her Departed children — if it ever happened at all.

Yes, The Leftovers suggests an answer to the Sudden Departure, but it's up to you if you'd like to accept that closure and buy Nora's story. It is, like the reasoning behind the Departure and Kevin's inane ability to resurrect himself, perfectly ambiguous.

After Kevin confesses to his truth — that he never accepted Matt's story that Nora left, and used every vacation for the past decade-plus to visit Australia to try and find her (*sobs*) — Nora offers her own explanation for what happened after she entered the chamber. There's a parallel universe where 98% of the world's population vanished, rather than 2%. In this world, in a desolate world filled with orphans and broken families, Nora's family are the blessed ones. They have each other, even though Nora's missing from their lives. Nora never greets them, realizing she might as well be a ghost, and asks the scientist who first constructed and went through the device to build a replicate to return her back to her world.

It's a story that feels logical, if you're willing to look past the holes. For starters, wouldn't the doctor who traveled through consider building a device to help the 2% in this alternate world, many of whom are devastated by their grander Departure? How did he rebuild the machine on his own? You'd have to assume he had a lot of helping hands with the first go-around. Most of all: I'm pretty sure Nora was in the midst of shouting "Stop!" as her interdimensional chamber filled with fluid. So you can also believe that Nora didn't go through the chamber, that she stopped herself. And if you accept that, then you could also reason that the embarrassment led to a self-exile in Australia, and that the faux-Departure parallel universe is an elaborate coping mechanism to give herself closure for her missing children (it's a much better and more convincing Band-Aid than a Wu-Tang Clan tattoo).

But the myriad questions regarding Nora's journey are inconsequential compared to Kevin's acceptance of her truth at face value. "I believe you," he says. "Why wouldn’t I believe you? You’re here."

Kevin's willing to accept her story — that she visited this other world and returned — because he loves her, simple as that. If there's something in "The Book of Nora" that isn't mired in ambiguity, it's the profound love between two people who may or may not have traveled to alternate dimensions and trippy purgatories. Grief may have been our gateway to The Leftovers in season one, but the series was ultimately a love story. It's not a stretch; grief and love are inherently tied to one another. To grieve, you must first have loved.

Lindelof created a series that was never interested in answering big questions, and was steadfast to this commitment. Unlike, say, Westworld or even Lost, there was no puzzle box to solve. The best writing around the series are deeply personal essays that face a universality of life in some way, shape or form: grief. Not everyone is comfortable handling grief — just look at Nora's arc over the show's three seasons. What Kevin offers Nora when he extends his hand, more so than acceptance, is another chance to live. Another chance to love.