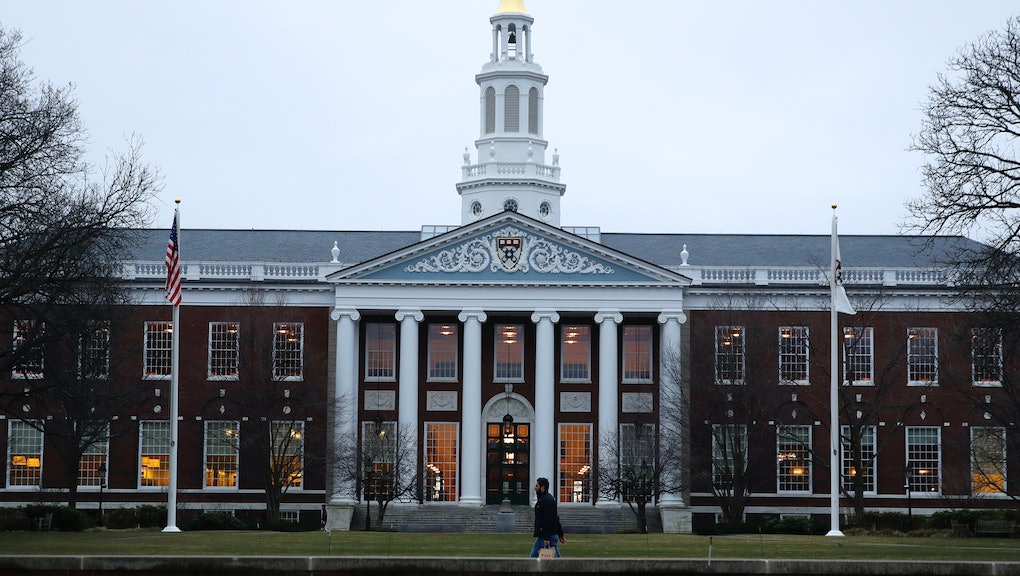 Harvard has revoked at least 10 prospective students' acceptance letters after it was discovered that the students shared racist and sexually explicit memes via a private Facebook group chat.

Students used the group chat to share offensive content that would have gotten them banned from the main class of 2021 Facebook group. Memes traded in the group reportedly mocked sexual assault, pedophilia, the Holocaust and children's deaths.

Caroline Najjar, a journalist at The Tab got a hold of screenshots of the offensive memes and was horrified by what she saw. "The memes were obviously egregious and there's no excuse. There's definitely a line that shouldn't be crossed and I was appalled," she said.

In April, when administrators at Harvard became aware of the type of content being shared, they reached out to the students and asked for an explanation. After reviewing their responses, at least 10 acceptance offers were revoked.

"We do not comment publicly on the admissions status of individual applicants," College spokesperson Rachael Dane told the Crimson.

Meme groups are common at top colleges; Harvard's main meme group, Harvard Memes for Elitist 1% Tweens, boasts over 30,000 members. However, the founder of the group wanted to make it clear that the main Harvard meme group had nothing to do with the type of content being traded by the former incoming freshman.

"I know no one from the incident," she said, noting that she has removed offensive content from the main group in the past, but "nowhere near the level of obscenity of the private group chat memes."

In order to gain acceptance into the private meme group chat, prospective Harvard students had to prove themselves by posting borderline offensive content into the main class of 2021 Facebook group.

Posting "edgy" memes was a requirement to join the group

"The process of forcing students in the main chat to send something outrageous or 'edgy' as a way to join the 'dark' chat is almost akin to the hazing that a lot of frats/sororities are known to do," he said. "And in today's political environment of people already being easily radicalized by Internet rhetoric, it's dangerous."

Chen-Ran and several other students who run popular college meme pages admitted to being in private meme-sharing group chats themselves, but stressed that the content of most private meme groups is benign.

"In my year (2020), our meme chat was pretty harmless," Chen-Ran said, adding that his was likely the first year incoming students made a meme chat before they even got to campus.

Yet maintaining order in a large public meme group can be challenging. Many admins said that they had seen smaller groups splinter off based on decisions to keep or ban certain types of content.

Some Yale students splintered off and formed a group called Yale Buckley Memes for Alt-Right Teens after Emmett and other admins took down "edgier" memes that had been posted in the main group, Emmett said. But the Alt-Right Teens group appears to be, mostly, just a parody.

The stated mission of the meme group is to "promote meme diversity" and "provide a forum for Yale students to consider and examine a range of memes to which they are rarely exposed."

Kelsang Dolma, also an admin on Yale's meme group, told Mic, "there's a fine line between 'edgy' memes and blatant racism/sexism/everything too far. I thought it was especially disgusting that the (would-be) Harvard students joked about sexual assault and child abuse."

But some students said that, after viewing several hundred memes a week, it can be hard to tell what's offensive and what's not.

After viewing several hundred memes a week, it can be hard to tell what's offensive and what's not.

Brandon Epstein, founder of MIT Memes for Intellectual Beings and Spicy Memelords, said that over time, he's become desensitized to certain types of memes, particularly those that mock groups he is a part of. That said, he would be quick to remove anything that's blatantly racist or advocating a crime, he said.

"I'm not going to overuse my ban hammer, but I'm ready to take appropriate action if I see something that's really edgy in the group," he said.

Will Ye, founder of Duke Memes for Gothicc Teens, said that his meme group's policy on blatantly offensive memes is a swift removal of the offending meme and blocking of the poster from the group. "However, the judgment of how offensive a meme is and the removal of said memes is a common example of the dilemma in meme ethics," he said.

Owain West, a moderator for University of Pennsylvania's meme group, deals with this dilemma regularly.

"We have had offensive memes in the past, and they're dealt with on a case-by-case basis," he said. "It's a fine balance between allowing a marketplace of ideas to flourish and promoting a healthy community."

"The judgment of how offensive a meme is and the removal of said memes is a common example of the dilemma in meme ethics." — Will Ye

"I’ve been lucky enough to never have any offensive content in my group," said Luke Cuomo, founder of Dartmouth's meme group. He noted that luckily, "people don’t want to publicly post offensive content if their name is attached to it, especially in a small community like Dartmouth."

Did the punishment fit the crime?

When asked if the prospective students in the Harvard private meme chat deserved to have their acceptance letters revoked, however, many college meme group admins were torn.

All agreed that the content sounded horrible and the would-be students deserved some sort of punishment, but several questioned whether kicking them out of the class of 2021 was the right move.

"I just think it's unfortunate for everyone. They should have known better, but I still empathize with them," said George Iskander, a cofounder of Yale's meme group. He admonished the type of content they allegedly traded, but said, "Losing an acceptance is a huge thing... I hope they learn and improve through this."

"I suspect there will be a big debate if Harvard has the right to rescind offers based on purely non-academic non-Harvard-affiliated activities," Ye said. "I also believe privacy plays a part; publicly posted offensive memes may have punishments justified, but in a private group chat? Debatable."

Saul Urbina-Johanson, a current junior at Harvard, said he thinks Harvard made the right call.

"Harvard has shown that it's committed to pursuing an inclusive and respectful environment for people of all identities by banning these students," he said.

"I can't imagine people casually having conversations of the sort in the dining halls or anywhere public on campus. As our Harvard Memes for Elitist 1% Tweens group alone shows, I think there's a mutual understanding that cracking jokes at the expense of marginalized identities is not welcomed at Harvard."

When the Crimson article was shared to Harvard's main meme group on Sunday, reactions ran the gamut.

"I appreciate that they were concerned about sexual assault jokes etc., but isn't expulsion too heavy a punishment?" a Cornell student wrote.

"Obscene memes for at least 10 teens," one NYU student in the group joked.

"I will think more before posting at Dartmouth Memes for Cold AF Teens," said a Dartmouth student.

"It's a meme-eat-meme world," said another member of the group.

"I'm sorry, I can't feel bad for them because neither pedophilia nor the Holocaust nor radicalized murder is OK, yo. I don't meme about sexual abuse or mass genocide or, ya know, rape, etc.," a USC student said when the story was shared to the USC meme group.

"Gotta love it when people speak anonymously because they don't want to be publicly connected with their own behavior," a former Harvard student said. "If you can't be proud of your memes, they're not good memes."