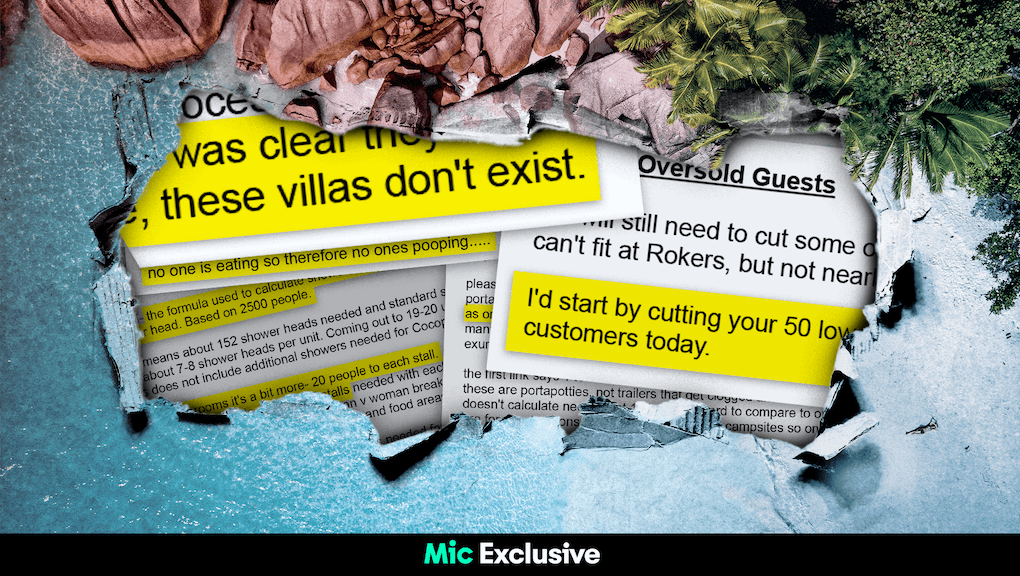 More than three weeks before Fyre Festival's epic collapse in the last weekend of April, Fyre executives were rapidly facing the logistical nightmare of getting ready for their wildly hyped festival.

In an urgent April 3 email with the subject line, "RED FLAG- BATHROOMS/ SHOWER SHIPPING," a mid-level Fyre Festival worker alerted senior staff, including 25-year-old co-founder Billy McFarland and Fyre Media president Conall Arora, of a growing crisis: the unexpectedly high costs (estimated to be at least $400,000) of shipping enough toilets and showers to the Bahamas to accommodate an anticipated 2,500 people on the island.

This followed the news that its caterer, Starr Catering Group, had just pulled out of the festival. Those two events prompted one assistant on the email thread to joke, "No one is eating so therefore no ones pooping."

That email is one of several thousand, provided to Mic by a source close to the matter, that were exchanged between festival organizers before and after the festival was shut down. Their accuracy was confirmed by three former festival staffers who were on the email exchanges. All requested anonymity for fear of legal retaliation; Fyre Media is the subject of several lawsuits alleging fraud or breach of contract, along with a federal investigation.

Neither McFarland nor Arora responded to Mic's text and voicemail requests to both for comment. On the same day Mic reached out for comment, Fyre Festival's official website stopped working. All other people quoted from the emails either declined or did not respond to Mic's request for comment.

After the festival was postponed amid a heavily documented lack of adequate housing, food and amenities for the thousands of people reportedly spending up to $12,780 to fly to the Great Exuma island in the Bahamas for the event, organizers issued a statement that read in part, "We thought we were ready, but then everyone arrived."

Two email exchanges — excerpted below — suggest there were many warning signs, well in advance, that Fyre Festival would be far from ready.

"We have to move quick on this or we are in a shitty place, lol. Sorry."

After Lyly Villanueva, executive producer of the festival, sent the initial urgent email about the cost of shipping bathrooms, Fyre president Arora asked how many they planned to secure for the festival. Villanueva estimated that 125 stalls, or approximately 18 to 20 bathroom trailers, would be required to accommodate the number of people on the island.

Arora pushed back, suggesting Fyre could save money by securing about half that number of bathrooms.

"If we cut it in half, we would just have double the line wait? I'm seeing some sites that say we could get away with 75 toilets," Arora responded, sending multiple links to external sites to back up his calculations.

But the links were to sites providing portable toilets, which Villanueva seemed to advise against.

"Please keep in mind those are calculations are for events lasting 8-10 hours with portapotties in grassy fields," she wrote. "This is a 'luxury' campsite where people will be using this as [their] only source of relief for 5 consecutive days."

"Ultimately its your call, but please consider the backlash of nasty bathrooms and showers," Villanueva warned. "We have to move quick on this or we are in a shitty place, lol. Sorry."

Arora continued to press. "It sounds like we can save a lot of money if we sub in port a potties," he wrote. "Anyway could we get an idea of a nicer way to do this and how much we could save?"

A lawsuit filed in May by festival attendees Matthew Herlihy and Anthony Lauriello accuses McFarland and festival co-founder Ja Rule of "false representations, material omissions and negligence," citing the dearth of bathrooms and showers on the island among its many claims.

"The island was lacking basic amenities," the suit alleges. "There were no communal showers or bathrooms as promised; instead there were port-a-potties (only about one for every 200 yards) that were knocked down and only three showers although there were hundreds of people arriving."

Villanueva did not respond to Mic's request for comment.

"I'd start by cutting your 50 lowest paying customers today."

Another set of emails — which began on April 20, a week before the first of thousands of guests were scheduled to arrive — started with a warning about housing on the island.

With the subject line, "***DO NOT IGNORE*** HOUSING UPDATE & ACTION ITEMS FOR YOU," Marc Weinstein, a senior consultant working on accommodations for the festival, began an urgent thread to a close circle of colleagues that included McFarland and Arora.

At one point, according to Weinstein's email, a total of 593 people — including social media influencers, investors, artists, vendors and staff — would not have housing when they arrived just about a week later.

Weinstein offered a solution to the crisis: renting a cruise ship for $530,000 to house up to 225 people. As for the other 368, he suggested Fyre bump the lowest-paying guests from the first weekend of the festival.

Weinstein asked Grant Margolin, chief marketing officer for Fyre Media, to begin contacting the lowest-paying guests "ASAP" and telling them they would be "upgraded" for the festival's second weekend, in May.

Margolin replied that he would follow through on those instructions, saying, "With regard to cutting the lowest 50 + offering an upgrade to Villa + Artist Pass, our team will start to make the calls today."

But there was one problem with Weinstein's plan: Those luxury villas — which Fyre Media marketed on its website and sold for thousands of dollars to attendees — don't seem to have existed.

Two days later, on April 22, Weinstein sent an email to staff strongly suggesting a campaign begin to reach out to the influencers planning to attend — and prepare them for seriously reduced accommodations.

"It is my opinion based on conversations with influencers, that the majority of them are not going to receive what they were promised," Weinstein said in a note urging Fyre staff to be more transparent. "In speaking to even low level influencers, it was clear they expected their own rooms at private villas on the beach. Of course, these villas don't exist."

Some of the limited housing they had for influencers apparently lacked bare essentials like toilet paper and water. At one point, the team deliberated whether to make VIP guests staying in these houses accountable for supplying such basic provisions themselves.

Neither Weinstein nor Margolin responded to Mic's request for comment.

McFarland and Ja Rule are facing several lawsuits alleging fraud and breach of contract. One is a $100 million class-action complaint filed on behalf of attendees by the entertainment law firm Geragos & Geragos.

A key allegation in the suit is that organizers were aware of the trouble months in advance and that Fyre was "dangerously under-equipped and posed a serious danger to anyone in attendance," Rolling Stone reported.

The suit alleges: "The festival's lack of adequate food, water, shelter and medical care created a dangerous and panicked situation among attendees — suddenly finding themselves stranded on a remote island without basic provisions — that was closer to The Hunger Games or Lord of the Flies than Coachella."

McFarland and Ja Rule have disputed those claims. McFarland was reportedly caught on a recording at a May 2 meeting with employees at Fyre's New York City office saying media coverage surrounding the event had been "sensationalized."

Mic continues to vet and report on the thousands of leaked Fyre emails. If you have information about the Fyre Festival, you can share it confidentially with us, too.

Don’t miss our next story. Download Mic’s app here and sign up for our daily newsletter here.