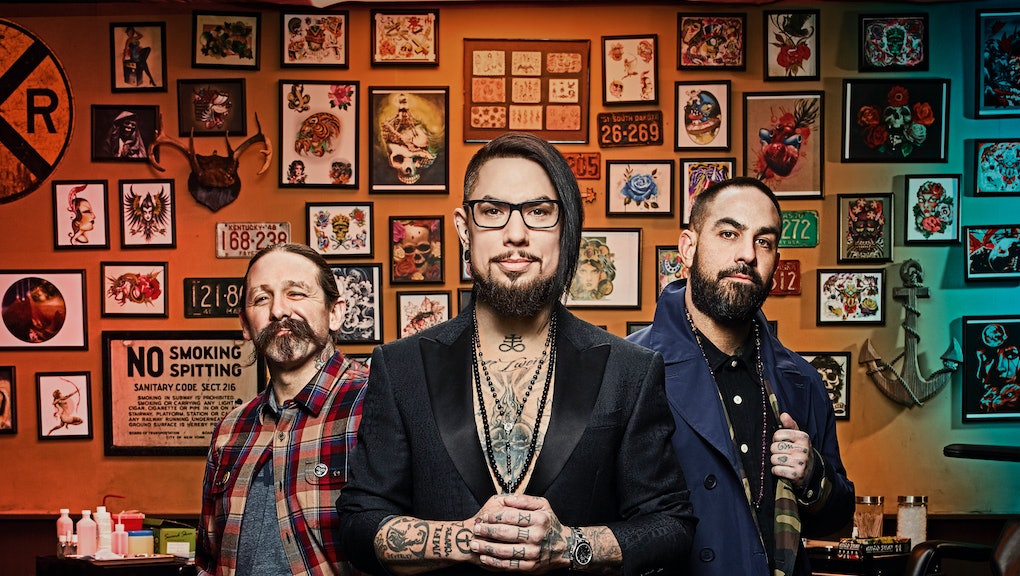 Ink Master returns to Spike on Tuesday for its ninth season and this year the stakes are higher than ever. A whopping $200,000 is on the line, along with the first-ever title of "Master Shop." But, of course, there is a new twist to keep the contestants on their toes. Artists enter the competition with a partner, and if one person botches a tattoo, it means the end of the line for both of them.

"It's a fun one," Andrea Richter, showrunner and executive producer from Truly Original production company, said. "When we locked in Shop Wars it was an exciting moment. We've seen individuals, we've seen great artwork, we've seen teams, we've seen bonds and alliances. The closest we probably ever got to something like this before was Master vs. Apprentice, but they weren't able to work together."

Master vs. Apprentice was the sixth season of Ink Master which, as you might have guessed, pitted mentors against their apprentices. The twist introduced an interesting dynamic between contestants as some mentors and apprentices refused to turn on each other. Despite alliances forming, the format of the series didn't allow them to succeed as a team. That's where season nine switches up the formula.

"The interesting part that I don't think I realized going in is you have 18 artists," Richter said. "But for us, it really became nine shops. You always identified them together."

Some of the shops aren't just competing as artists, though. Dane Smith and April Nicole of Artistic Skin Designs in Indiana are dating. The co-owners of Allegory Arts in Alabama, Ulyss Blair and Eva Huber, are the first ever husband and wife duo to ever compete on the series.

"It's phenomenal," Richter said of seeing how those relationships play into the game. "Not only do they work together at home, but yes, the fact that they also have a personal relationship outside of work then gives a new level that we've never seen on Ink Master."

But this doesn't necessarily mean that these couples have an advantage. For Richter, the excitement was seeing how being in a relationship affected the game. Would these artists "split apart under the pressure of it"? And would they be able to work with other people?

"Just knowing the stress Ink Master — and any reality competition — puts people under, there's going to be some of them that excel and work well together," Richter said. "Then there's also going to be ones that divide and go against each other because of the pressure on them."

How relationships evolve throughout season nine isn't going to be the only thread fans will want to watch for. Ink Master is keeping with the same format of judges Dave Navarro, Oliver Peck and Chris Nunez eliminating one person — or shop, in this case — every week. But even though 18 artists are competing under nine shops, that doesn't necessarily mean that this season will be a quick one.

"There are always twists and turns on Ink Master," Richter said. "No, it’s not a shortened season. Let's just say it remains to be seen."