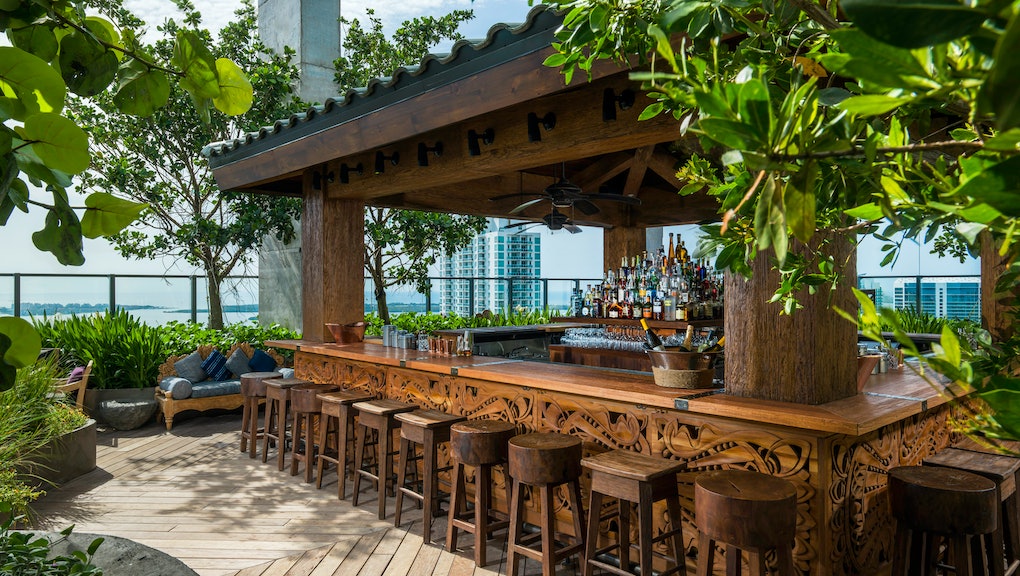 How Instagram has changed restaurant design — and the way we eat

Before opening his first restaurant in Paris, chef Simon Horwitz spent months sourcing tables from Burgundy, light fixtures from Germany and custom-crafted clay plates from Peru. Working alongside Paris-based interior designer Aude Gros-Rosanvallon (who has her own firm, Holocene), the chef opened Elmer a year and a half ago. There, dark metal stools sit under light wood tabletops, creating just the right contrast against the white handmade plates, accented with brushstrokes of pale purple, orange and blue. For lighting, the chef wanted a soft, yellow spotlight shining down on each plate, so diners could not only see their food, but could also photograph it without requiring extra lighting.

While design has always been at the forefront of a restaurant, beautiful backdrops that take into consideration the lighting, the colors and the utensils are now becoming just as important as the food. When restaurateurs talk about design, Nils Norén, co-founder of restaurant and beverage advisory company Absolute Culinary by Asil, said there’s one big question on everyone’s mind: "What’s going to be your Instagram moment?"

Instagram was not the initial focus of Elmer’s restaurant design, but when the bistro debuted in December 2015, Horwitz said it immediately became the factor driving business. The lighting was meant to put emphasis on Simon's dishes and "create a bubble of intimacy around the table,” designer Gros-Rosanvallon said in an email. Bloggers and social media stars flocked to the perfectly lit space — on their own dime — snapping photos of the artistically plated fare and the utensils the chef spent weeks searching for.

“Catching 'the' picture of a place now serves as the stamp on many people’s culinary passport,” Sabato Sagaria, chief restaurant officer of Union Square Hospitality Group, said in an email.

For chefs and designers, social media hasn’t necessarily changed the way they do business, but it has affected how they conceptualize spaces. “Diners today are not just taking photos of their food, but of the whole table, especially if there are standout design features that call out where they are,” Atlanta-based chef and restaurateur Ford Fry said in an emailed statement.

Scroll through Instagram and you’ll find the usual suspects when it comes to restaurant design, from neon signs sporting messages like “long live bacon” to patterned floor tiles, murals and exposed brick and quotes. The key to design that won’t fall flat on Instagram — and in person — is decor that’s powerful, not gimmicky.

“Installations can be done very well, or just injected poorly and read thin, so it takes careful planning and design research to ensure they are fully realized, aesthetically beautiful and magnetic from a guest’s photographic point of view,” Christian Schulz, design director at California-based agency Studio Collective, said in an email. At one-year-old restaurant Sugar, on the 40th floor of the East Miami hotel, Schulz and his team encouraged the client to create a series of Instagram-worthy moments.

One of the most striking: the 19-foot-long light fixture stretching along the ceiling from the elevator lobby to the hostess stand. Studio Collective designed the piece using a mixture of bronze perforated metal pendants custom-crafted in Egypt, with 300 light bulbs dropping down in various shapes, sizes and textures.

This type of well-executed, show-stopping design lends itself to be photographed for social media, and Instagram in particular. “One thing that I've noticed is that newer spaces opening within the past year or two are incorporating a highly Instagrammable experience from start to finish for their guests, even providing them with a hashtag to go along with their social media posts,” San Francisco-based photographer Jason Henry said in a Facebook message.

"They've got it all from hip floor tiling, a clean and bright interior with poppy accent colors and a mural outside of plastic flamingos."

Take the 3-month-old Latin-inspired Media Noche in San Francisco’s Mission District. Vibrant teal walls and colorful tiled floors are just as photo-worthy as the Cuban counter whipping up gourmet versions of empanadas and croquetas. “They've got it all from hip floor tiling, a clean and bright interior with poppy accent colors and a mural outside of plastic flamingos (painted by local street artist fnnch) where most patrons stop and take a selfie,” Henry said.

While some restaurants focus on creating this scene in the hopes that it will be captured on social media, others follow the “less is more” mentality, letting the restaurant’s natural state — and cuisine — speak for itself. This is especially true for smaller restaurants that don’t have the financial backing or budget of a large hospitality group.

When selecting a space for Chicago’s S.K.Y. Restaurant, set to debut late this summer, general manager Charles Ford said he and and his team settled on a spot that didn’t need a lot of work aesthetically, thanks to the gorgeous exposed brick walls and bright, natural lighting. Instead of the restaurant’s design driving the photography, Ford and chef Stephen Gillanders, former executive chef and partner at Intro Chicago, hope that their cuisine will drive that photography craving for diners. “As a restaurateur, if during the dining experience people are looking only at the design and not the food, there’s a problem,” Ford said in a phone interview. “But if people are saying, ‘Don’t cut that yet, I need to take a picture,’ you’ve done your job.”

That being said, chefs don’t want diners spending 20 minutes photographing a plate while the food gets cold — or only visiting their restaurant for a photo. In a popular 2014 NY Daily News article, a famous New York City restaurant found that over the past decade, the number of customers served daily remained the same, but service was significantly delayed thanks to smartphones. In 2004, diners weren’t taking photos of their food, but a decade later, more than half spent an average of three minutes photographing their plates. The number of reheating requests also rose from 2 out of 45 diners to 9 out of 45.

“I'm not a fanatic of social media," said the Paris-based Horwitz. "Yes, it may help chefs, but are you going to the restaurant only to take a picture? When a chef serves you a plate, it is supposed to be at a certain temperature, so if you want to take a picture, take it quickly, but enjoy the food.”