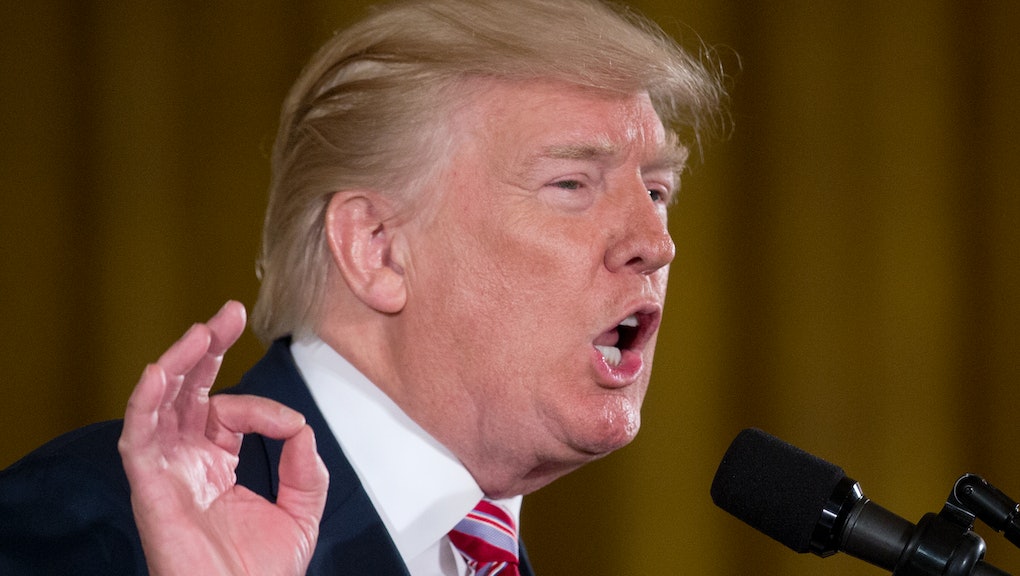 Trump said his tweets are "honest." Here are 6 times they weren't.

Social media certainly does offer Trump a platform for "unfiltered" communication with American citizens, eliminating any barriers between the president and his online followers. But is it really "honest?" We counted six different times this year that Trump spread lies on Twitter under the guise of truth and transparency.

Trump's claim to be in favor of upping spending on healthcare doesn't align with his proposed budget, which cuts $627 billion from Medicaid and $87 billion from the National Institutes of Health, and slashes the Children's Health Insurance Program by at least 20%. The key increases in Trump's proposed budget will fund defense and infrastructure — not health care.

Trump said the GOP's new health care plan is set to offer lower premiums and deductibles, but the Congressional Budget Office determined that deductibles will actually be pricier than they are under the Affordable Care Act, due to the new plan's lower actuarial values. Additionally, his promise to "take care of pre-existing conditions" has already been debunked by the Center for American Progress. The Affordable Health Care Act gives states the right to allow insurance companies to up the price for anyone with a pre-existing condition, including things like rape, acne and anxiety. The Center for American Progress' analysis estimated that someone with asthma would end up paying a $4,270 premium surcharge, while premiums for pregnancy and metastatic cancer would skyrocket with $17,060 and $140,510 surcharges, respectively.

Trump has bragged about the significance of his "landslide" electoral victory on several occasions, but compared to his presidential predecessors, there's nothing outlandish about his win. Trump won 306 of 538 total electoral votes, which places him 46th on the list of all 58 presidential winners throughout American history. Not exactly an "easy" victory.

On March 20, more than two weeks after Trump tweeted accusing Barack Obama of tapping his phones during his campaign, former FBI Director James Comey announced that the FBI found no evidence to support the allegation. Former Director of National Intelligence James Clapper also denied Trump's claim, explaining that, as the head of the intelligence agency under the Obama administration, he would've been aware of any surveillance efforts.

By Feb. 7, six of Trump's 15 Cabinet selections were confirmed by the Senate. Compared to prior presidents, this early approval rate was nothing novel, and certainly not the "longest such delay" in American history. Bill Clinton's cabinet wasn't filled until March 11, George H.W. Bush's wasn't entirely confirmed until March 18 and Barack Obama's took until April 28. The Senate approved Trump's final Cabinet member by April 27, beating out Obama by one day.

With a total of 762 murders, Chicago's homicide rate in 2016 was extraordinarily high. However, this number is towered by its homicide rates from the 1970s through the mid-'90s, where annual murder rates in the Windy City frequently reached the 800s and 900s, due largely to the crack cocaine epidemic.