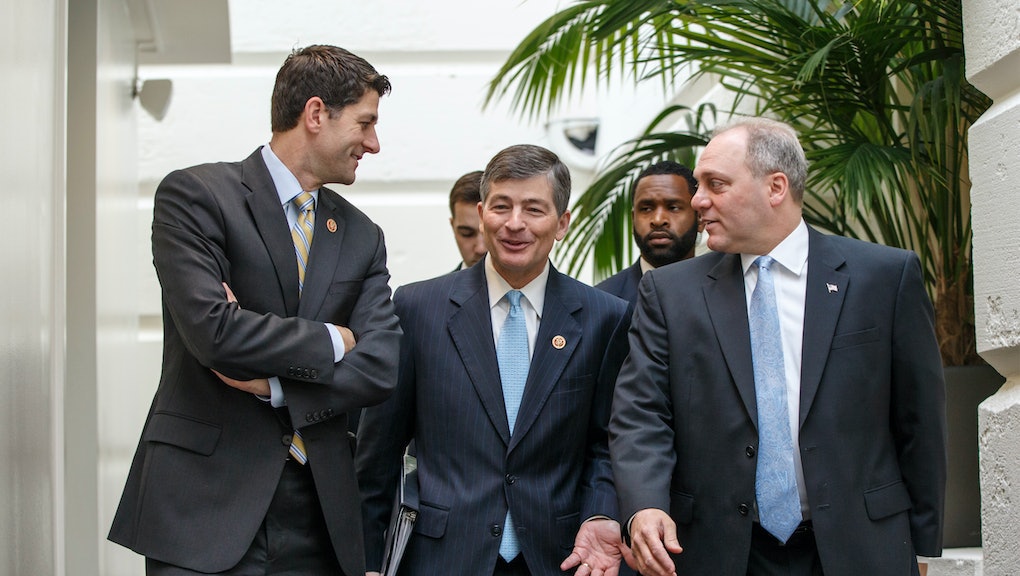 On Monday, House Republicans began their push to repeal the Dodd-Frank financial reform law enacted under President Barack Obama. The House Financial Services Committee announced the policy effort by tweeting that they will "end the era of bailouts and 'Too Big To Fail' once and for all."

Unfortunately, the proposed legislation does exactly the opposite.

After the 2008 financial crisis, Congress passed Dodd-Frank with the express intention to reign in excesses in the financial system that created "Too Big to Fail," the phenomenon of banks becoming so large and intertwined that their failures could take down the entire U.S. economy.

The law addressed the problem of big bank failure using a number of mechanisms. It created a process for winding down big banks in trouble, forced banks to create plans for liquidating themselves in a crisis, created a special oversight board to address financial institutions large enough to pose systemic risk to the economy and limited the kinds of risky bets that big commercial banks could take.

While many critics and consumer advocates argued Dodd-Frank did not go far enough, most advocates agreed that it was a step in the right direction.

But now, in an effort to garner support for repealing the 2010 law, congressional Republicans are trying to turn the tables by arguing that Dodd-Frank does not actually fix the problem of too big to fail and actually exacerbates it. On his website, House Speaker Paul Ryan argues that Dodd-Frank made the "Too Big to Fail" concept "the law of the land" and that the Republican repeal bill will end this "once and for all." But financial reformers say that argument is nonsense.

"The sponsors of the bill are well aware that bank bailouts are unpopular and so they try to perpetuate this notion that Dodd-Frank perpetuates bailouts — it's simply nonsense," Carter Dougherty, communications director for Americans for Financial Reform, an organization dedicated to safe and consumer friendly banking, said in an interview.

Enter the Financial CHOICE Act: The GOP-backed legislation proposes a series of reforms that would either eliminate or water down Dodd-Frank's many provisions for mitigating the risk of bank failure and replaces them with a limit on the amount of leverage banks can take on. Experts who support those kinds of requirements have pointed out that the proposed leverage limit is woefully inadequate.

Ryan's website argues that, under the CHOICE Act, "not a single dollar of taxpayer money will go to bail out Wall Street firms." But that statement is misleading at best. The portion of the proposed legislation that refers to "ending bailouts" actually just repeals Dodd-Frank's orderly liquidation process, a mechanism for how to wind down a failing bank while limiting risk to the whole financial system. By repealing it, the CHOICE Act leaves regulators with no established process for how to deal with a big bank failure, basically ensuring Congress would have to step in if one were to happen.

What's more, the argument that "not a single dollar" goes to bailing out Wall Street under the proposed law is further misdirection. In order to provide capital to struggling banks in 2008, Congress had to pass a law allocating the funds. Should banks one day find themselves in a a similar position, Congress would again be under immense pressure to pass a similar law to bail them out, especially without an orderly liquidation process in place.

"You could write that in legislation and you could make a good talking point out if it," said Dougherty. "But you have to solve the problem of how [to] let these banks go out of business without crashing the system."

On the campaign trail, Donald Trump appeared to position himself to the left of Hillary Clinton on some banking issues by supporting a modern day Glass-Steagall Act. Such a law would prohibit commercial savings banks from engaging in more risky and speculative forms of banking. But Trump's treasury secretary, former bank executive Steve Mnuchin, quickly walked back Trump's support for Glass-Steagall upon taking office. The CHOICE Act goes in the exact opposite direction of Glass-Steagall by watering down a Dodd-Frank provision that limited some forms of speculative banking for commercial savings banks.

In addition to repealing those provisions designed to bring stability to the financial system, the bill also hampers the Consumer Financial Protection Bureau and repeals key Wall Street regulations designed to protect people against fraud. For those reasons the GOP's bill is unlikely to get the kind of bipartisan support it needs to get past a Senate filibuster.

But the bill's rollout offers a window into how Republicans plan to try and implement their agenda in the age of Trump: by selling their policies as populist, even if they are anything but.