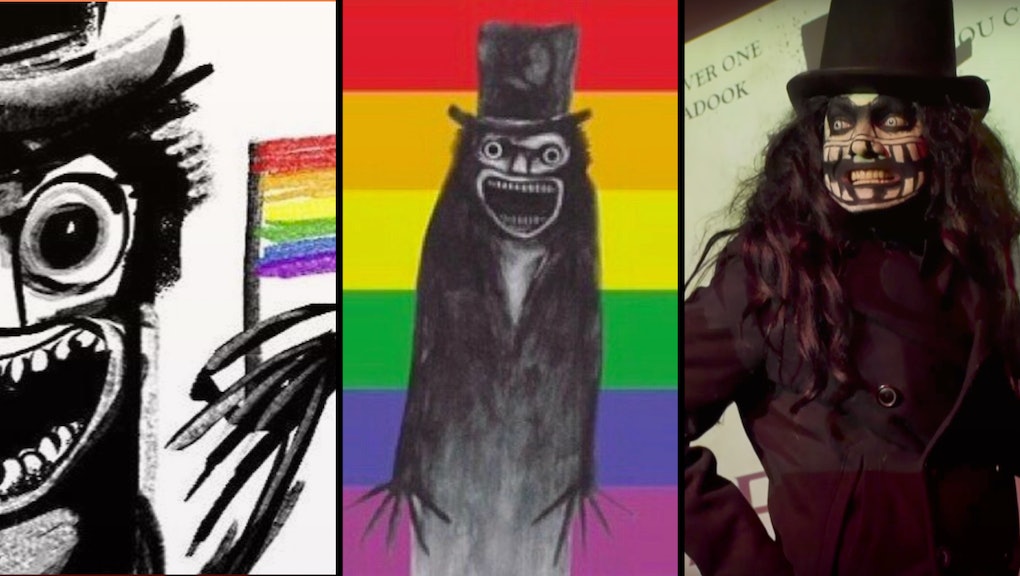 The Babadook is 2017's biggest LGBTQ icon. Here's why.

A conversation simmering for months on Twitter and Tumblr erupted this week, resulting in the Babadook, the trench-and-top-hat-wearing star of 2014 horror film The Babadook, being crowned as 2017's favorite queer icon.

The horror film, which centers on a widow raising her troubled son, landed on Netflix in 2015, where new exposure grew its fandom. One of the earliest links between the Babadook and queerness appeared October 30 on Tumblr, when user ianstagram wrote, "Whenever someone says the Babadook isn't openly gay it's like?? Did you even watch the movie??"

In a message to Mic, ianstagram said the Babadook is clearly gay because "he dresses for the occasion and he's always serving drama."

Those conversations eventually morphed into fanatical memeification and — bam! — the Babadook was gay. He waved pride flags. He surfed Grindr. When Instagram user DJMikeyPop crafted a series of posts that put queer icons on the RuPaul's Drag Race runway, the Babadook was the first entry, before Showgirls' Nomi Malone, The Comeback’s Valerie Cherish and Romy and Michele.

Experts who spoke to Mic agreed the Babadook is a creature that can easily read queer. Michael Varrati, a screenwriter and curator of Comic-Con's annual queer horror panel, said the Babadook is a typical outsider, a character queer people recognize.

"This creature is trying to come out and be seen. By internet culture standards, it's a gay hero," Varrati said. "The Babadook just wants to step out of the dark and into the light."

While the Babadook is obviously a symbol of the mother's grief, "it could just as equally symbolize belonging or the need to belong," Alan Kelly, a columnist on queer horror at Blumhouse, told Mic.

As for "serving drama," Varrati agreed that Babadook's theatricality is central to his newfound queer-icon status.

"He is in Diane Keaton drag," Varrati said. "He's this vaudevillian creature."

In that sense, Varrati said, the Babadook shares a direct lineage with Freddy Krueger, who he contended is actor Robert Englund's drag persona.

Whereas Jason Voorhees or Michael Myers lumber their way silently through a good slash, Krueger constructs elaborate, fantastical traps and shoots off quippy zingers as part of his kill. And while the Babadook is a much more silent showman, he is a showman nonetheless.

The Babadook is "a creature that makes not just a normal book but a pop-up book about themselves," Lucy Balls, a New York City drag queen who performs as the Babadook, said in a statement. The attention he seeks, she said, might just be because he is "trying so hard to be felt and seen in the world and not shoved back down into the basement."

As the Babadook fights not to be shoved into the basement, the internet is also fighting to highlight his queer identity. The character's lack of dialogue and black-and-white color palette essentially make him a blank canvas, inviting our own ideas. His memeability lies in his blandness.

"You never quote know anything about [the Babadook], how it got there," Aviva Briefel, professor of English and cinema studies at Bowdoin College, said in a phone interview. "It invites this projection in some ways, this identification."

Briefel said movies like The Babadook and Get Out exemplify how people use horror movies to wrestle with their identities. Photoshopping the monster's image shows a fervent desire to discuss queer identity, she contended.

If photoshopping the monster is one indicator of the queer community's desire to count the Babadook as one of its own, then drag queen Lucy Balls' act shows an even deeper desire to inhabit the creature, even for the length of one musical number.

"Every time I take a coat off you think it will be something different, but it's another coat," she said. She described the act as "unrelenting, just like the Babadook."

Much like the mother in the film, who becomes a part of the movies she watches on-screen, queer people project themselves into films, whether horror films or Disney tales, even when characters or situations are not explicitly stated as queer.

When it comes to allegory, the Babadook's story of wanting to come out but being forced into suppression is something that queer people understand.

If the Babadook is searching for a home — a place to rest his top hat and peel off his peacoat — then the internet has given him one: in the pantheon of queer icons. On Twitter and Tumblr, the Babadook is no longer relegated to the basement or the closet, he is sashaying down the runway.