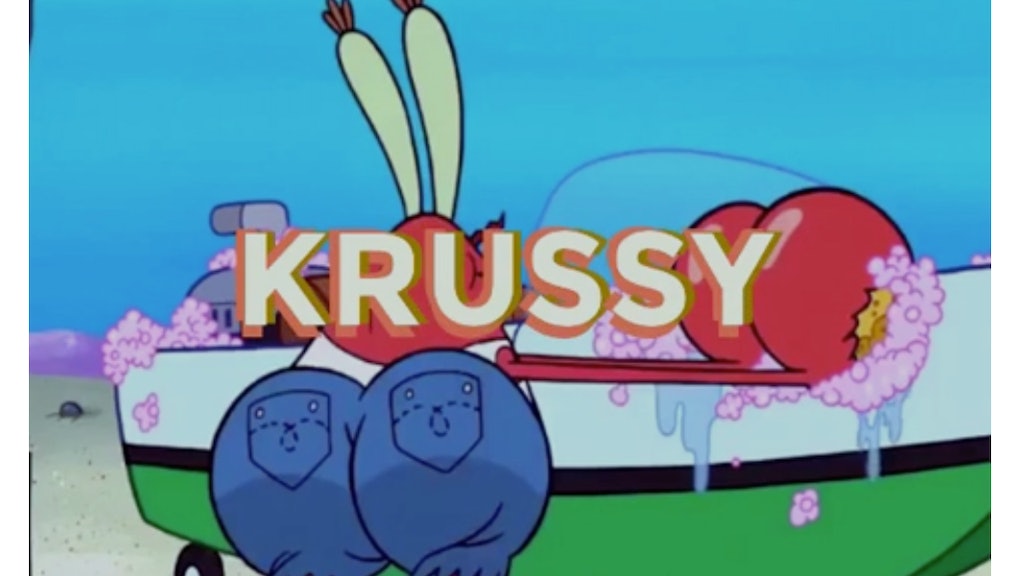 The "one thicc bih" meme is the worst thing that's ever happened. Here's how it began.

"One thicc bih," the newest meme on the internet, is simultaneously the best and worst thing we've ever seen — and its creator is very, very sorry.

Here's the quick and dirty of it: It all started with a video posted to Tumblr by user dolce-dandy, an 18-year-old from the Bay Area who asked to remain anonymous. In the video, an electronic, Auto-Tune-style song describes Mr. Krabs from SpongeBob SquarePants as "one thicc bih." It concludes with a desire to see his "krussy," which is exactly what you think it is.

The original video, which now has over 85,000 notes, is embedded below.

Since then, people have iterated on this formula, applying it to everything from the Babadook to other SpongeBob characters to Canadian prime minister Justin Trudeau.

People simultaneously love and hate this meme with every fiber of their being.

So, where — and why — the hell did this meme start? How are people making these videos? Don't worry, folks. We've got all the answers.

What's up with that Ditty app, anyway?

Dolce-dandy — and all of the people she's inspired — created the video using the Ditty app, which converts a string of text into a short song using any number of melodies built in. For example, you can create a song with the melody of "Sugar" by Maroon 5 or "The Star Spangled Banner" — but the song that's used most frequently, at least in this context, is "Good Day," one of Ditty's default melodies.

The humble origins of the krussy heard 'round the world

The "krussy" video "was the actual first time I used that app," dolce-dandy said in a Skype interview. "It was about 2 a.m. and I just happened to come across another Ditty video, and I thought, 'Hey, I wanna try that.' And that's what I made."

In case you're wondering, dolce-dandy didn't come up with the word "krussy" on her own, so the blame for this horrendous meme doesn't lie solely with her. The inspiration came from another Tumblr post in which a tomato was photoshopped onto Mr. Krabs' body in a "suggestive" way, to use dolce-dandy's own words. (Here's a link to the NSFW image in question. Prepare your eyes.)

But actually, to truly understand this meme's roots, we must go deeper — all the way to the, uh, thrussy.

In April, the following Tumblr post sparked the hate-to-love-it "thrussy" meme, a way to goofily describe the mouth and throat as a sexual orifice. "Thrussy" itself is an iteration on the word "bussy," a portmanteau for the phrase "boy pussy" that the gay community uses — sometimes ironically, sometimes not — to refer to a man's anus.

So, once "krussy" was spread all around the world, it was a pretty short leap to "babussy," "Trudussy" and all its other, equally raunchy offshoots. (I made an Overwatch-themed one that I'm a little too proud of.)

Dolce-dandy's following has skyrocketed since she posted the "krussy" video, and she is very sorry.

Once dolce-dandy posted the video, it took less than a day for it to gain major traction — even though she had only 34 followers at the time.

"When I woke up from a nap, [the video] had over 3,000 notes, which was really surprising," she said. "And by the following day, it had gained over 16,000 notes, and it only keeps getting bigger — regrettably."

Dolce-dandy said she never joined Tumblr with the intention of growing a large following, but in the time since posting that godforsaken video, her follower count has grown to over 500.

But she's not letting the meme's fame get to her head. In fact, dolce-dandy realizes what a horrible abomination the "one thicc bih" meme truly is.

Laughing, she said, "I’d like to say, from the bottom of my heart, from the deepest parts of me: My bad."