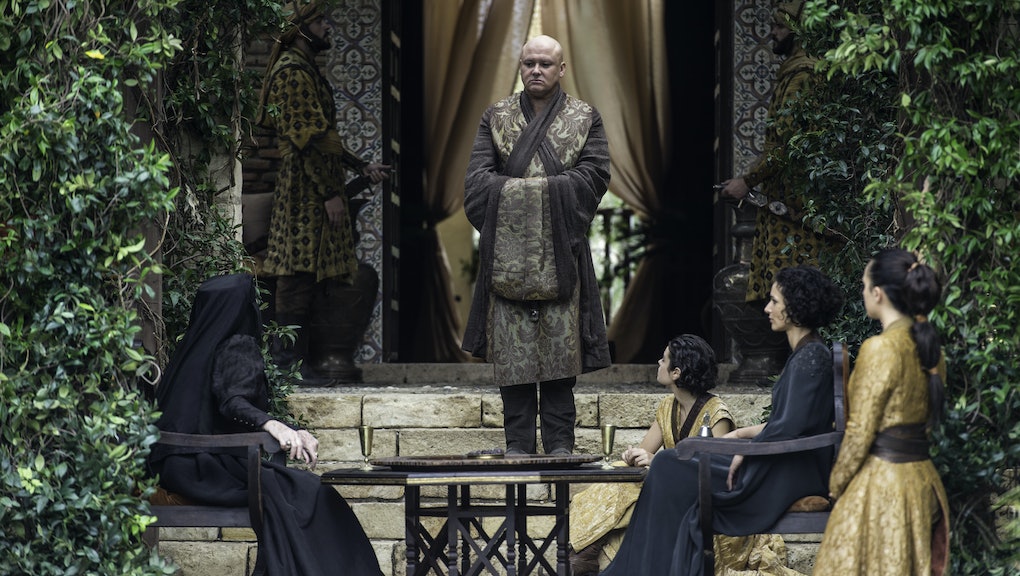 It may still feel like the wait will never end, but Game of Thrones' seventh season really is right around the corner — well, if that corner took about a month to navigate. The best way to pass the time while waiting for Game of Thrones' July 16 premiere is to tirelessly obsess over the plot of the upcoming season.

Through the release of a trailer, images and even scene descriptions, fans are beginning to get a better idea how things will unfold when the hit drama does finally return. And now, we may be privy to some further insight from a less likely source: a behind-the-scenes costume design featurette.

HBO released a video featuring costume designer Michele Clapton. While Clapton is discussing her passion for costume design and working with the Game of Thrones' characters, the behind-the-scenes clips are telling their own intriguing story.

When Game of Thrones was last on the air, Ellaria Sand had appeared to team up with Olenna Tyrell and Daenerys Targaryen. Together, they are likely hoping to remove the Lannisters from power. But Cersei does often seem to come out on top, and at some point in season seven, it looks like she will gain the upper hand over Ellaria. During the Game of Thrones featurette, Ellaria, played by actress Indira Varma, can be seen in chains, standing before Cersei.

Last audiences saw Sam, he had arrived in Oldtown to begin his training as a maester. Unfortunately, the Citadel maester was not aware of Jon Snow's position as the Lord Commander of the Night's Watch, and thus was not ready to allow Sam to begin his training. Well, perhaps not surprisingly, it does appear that Sam is on his way to being a maester in season seven.

In the featurette, viewers can catch a quick glimpse of Sam, played by John Bradley-West, in clothing very similar to that of the Citadel maester.

No family has had it worse in Game of Thrones than the Starks. But near the end of season six, things finally started looking up for the family. Jon Snow and Sansa reunited, eventually winning back Winterfell, and Arya seems to finally be making her way back home as well.

When it happens is unclear, but in the featurette, it certainly appears as if Arya's sword, Needle, is present in the same scene as Sansa. So, Game of Thrones fans should be getting a much-needed Stark sisters reunion sometime soon.

In the above picture, the handle to Arya's sword can clearly be seen. While much less clear, the picture below seems to show the same handle being carried behind Sansa.

As Game of Thrones' July 16 premiere date approaches, we are likely to learn even more about the upcoming season. For now, this featurette reveals just enough to hold fans over.