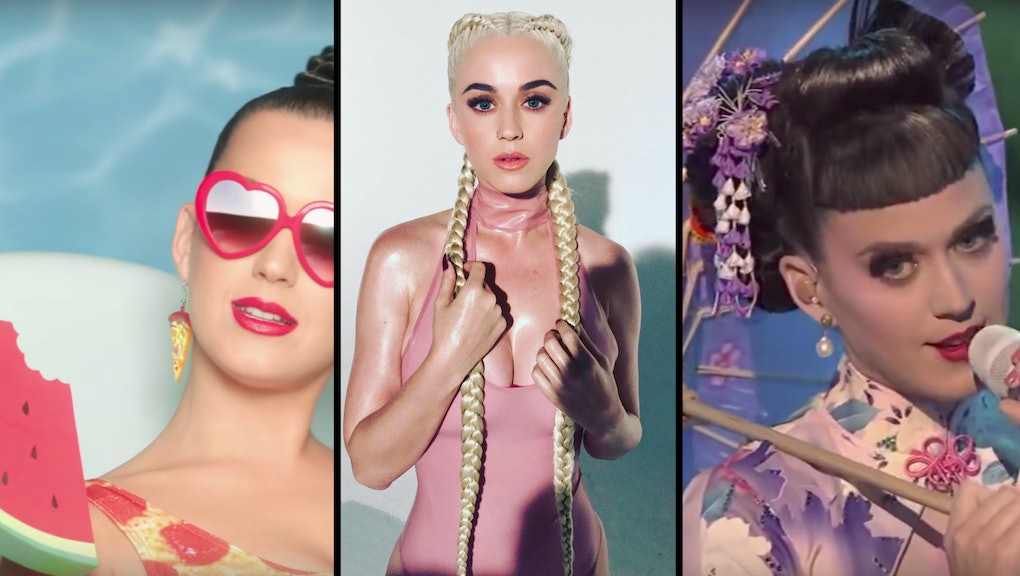 Katy Perry: A comprehensive timeline of her wokeness

Katy Perry has built quite the resume for herself over the past decade: She's sold over 6.5 million albums and over 70 million digital tracks, according to Billboard. With Teenage Dream, she tied Michael Jackson's record of having five singles from one album reach No. 1. And she's already headlined a Super Bowl performance.

But she's also generated a fair bit of controversy. She's worn geisha costumes, sported cornrows and been accused of gay baiting, just to name a few incidents. From her very first mainstream single, 2007's sarcastic "Ur So Gay," to the Friday release of her latest album, Witness, little of what Perry's said or done has been without criticism, appreciation or backlash.

As one of pop's titans embarks further into territory she calls "purposeful pop," it's important to take a look at the journey she's taken, including the missteps and triumphs she's had on the way to wokeness.

Perry's career was birthed in controversy. Look no further than her first single, "Ur So Gay," from her 2008 debut album, One of the Boys. On the track, Perry complains that her hetero beau might be a Kinsey 6 because he wears an H&M scarf and reads Hemingway. It's no wonder that the song immediately raised a few concerns about homophobia.

If you're thinking Perry must've decided to stay away from LGBTQ-themed lyrics for her second single, think again. Instead, Perry doubled down and gave us the gay-baiting anthem of the century. The song was met with heavy criticism, though Perry has since stated that it's based on a real experience.

In December 2009, Perry became the poster child for "what not to tweet" after tweeting a picture of a trans person and making fun of their body. In response, LGBTQ media advocacy organization GLAAD made a blog post calling Perry out and advocating for people to tweet her their discontent.

Again proving that not every thought deserves a tweet, in 2010 Perry tweeted, "That's so chola of you!" after Taylor Swift shared on Twitter that she used Sharpie as eyeliner in an airplane bathroom.

For those unfamiliar with Perry's background, the singer had a deeply religious upbringing and even started her career with a Christian rock album. She put her religious roots on full display when she subtweeted Lady Gaga for the religious imagery in the Mother Monster's "Alejandro" video, which featured, among other things, Gaga wearing a latex habit. After Perry's tweet, her followers pointed out that Perry's played with religious imagery (like wearing a cross-laden bodice) in her own shows, as well.

After a low-cut wedding dress caused Sesame Street to cut a segment in which Perry explained opposites to Elmo via her song "Hot N Cold," Perry poked fun at the controversy on SNL. In the sketch, Perry appeared as a librarian being shamed for her body — the piece is far from a body-posi statement, but it showed Perry was both a good sport and willing to stand up for her own body. Most of the heavy lifting in terms of commentary came from Maya Rudolph, who, as her "Bronx Beat" character, noted, "Boobs feed babies… I turned on CSI the other night, and there's a dead guy with a worm in his eye. But we can’t look at the tops of boobs?"

While accepting Billboard's Woman of the Year award, Perry downplayed her feminist credentials to those in attendance.

"I am not a feminist, but I do believe in the strength of women," Perry said to the crowd. It was no doubt an odd distinction to make when receiving that particular honor, but she eventually changed her tune on feminism.

Sporting heart-shaped lipstick and a parasol, Perry performed her song "Unconditionally," in support of her album Prism, while dressed as a geisha at the 2013 American Music Awards. The performance stirred a debate about whether or not Perry's look amounted to cultural appropriation.

During an interview with an Australian radio DJ, Perry clarified her earlier remarks about feminism and took on the label.

"A feminist? Um, yeah, actually," Perry said. "I used to not really understand what that word meant, and now that I do, it just means that I love myself as a female and I also love men."

After Perry's declaration, some mused that she still seemed a bit fuzzy on the definition of the term, while some were ultimately happy that she was no longer afraid to embrace it.

Accusations of racism and cultural appropriation followed Perry throughout other live performances on behalf of Prism. During the Prismatic World Tour, she used backup dancers in costumes with exaggerated features, including large breasts and buttocks, during her performance of "I Kissed a Girl." They were more caricatures than people, and Twitter users called Perry out for the act, which they deemed racist.

There was almost no aspect of Katy Perry's "This Is How We Do" video from 2014 that didn't come under scrutiny. In the video, Perry wears cornrows, eats watermelon, has gelled-down baby hairs and says she gets her nails done "all Japanese-y." Oof.

After Taylor Swift inserted herself into Nicki Minaj's tweet storm about misogynoir in the wake of the 2015 MTV VMA nominations, Perry joined the argument with a shady subtweet. On Twitter, Perry called out Swift for feigning to be about female unity while making money off of "Bad Blood," a song supposedly about their ongoing feud.

After Leslie Jones faced a series of attacks from internet trolls fueled by right-wing provocateur Milo Yiannopoulos, Katy Perry rushed to her defense — and in the process brought the term "misogynoir," which refers to the unique combination of racism and sexism that black women face, to the attention of her millions of Twitter followers.

Throwing her hat into the political ring, Perry performed in support of Democratic presidential candidate Hillary Clinton days before the 2016 election.

Two days before Christmas 2016, Perry shared her holiday shopping with the world. No, she didn't splurge for a car or expensive clothes. Instead, she bought "Black Lives Matter" T-shirts, shouted out the Black Lives Matter Instagram account and gave fans a link to where they could purchase their own swag in support of the movement. (She also didn't miss an opportunity to label her choices "woke af.")

Earlier this year, Perry mysteriously tweeted about "opening up to consciousness" and how that can make a person realize how "asleep" they were. The tweet was honest and authentic, but also read as a bit of promo for her upcoming single, "Chained to the Rhythm."

Perry launched her fourth album, Witness, which she called an era of "purposeful pop," with a song about "living in a bubble" and being unable to "see the trouble." The song, widely interpreted to be about the 2016 election, invited outlets to ask if Perry had become part of the resistance; when the video — which takes place in a futuristic theme park named "Oblivia" — came out, publications read into the political message, with HuffPost name-dropping George Orwell's 1984 and Noisey joking that the clip could help you "achieve full wokeness."

Within days of claiming she wanted to make "purposeful pop," Perry poked fun at Britney Spears' infamous 2007 meltdown. While discussing her own mental-health-related break from music on the Grammys red carpet, she joked to Ryan Seacrest, "I haven't shaved my head yet." The Twitter backlash against her remark was swift.

In an April Instagram post, Perry sported cornrows, or what Kylie Jenner famously called "boxer braids." Though not obvious at first, Perry had tagged the entire Kardashain-Jenner family in the photo, labeling different parts of her body as different members of the reality-TV clan. In a move that didn't sit well with some commenters, Caitlyn Jenner was tagged by Perry's crotch.

During an Instagram Live session, Perry responded to several fans who were saying they missed her black hair with an odd non sequitur.

"Oh, do you miss Barack Obama as well? OK, times change. Bye," Perry said. The statement drew swift criticism on Twitter from people who felt it was in poor taste. Even some of Perry's defenders, who pointed out that Perry was pro-Obama and vocally anti-Trump, acknowledged the joke fell a bit flat.

Perry once again drew the ire of her queer fans when she released a single with the rap trio Migos, who earlier this year made homophobic comments about openly gay rapper ILoveMakkonen. Fans contended that the collaboration didn't jibe with her newly woke persona. It didn't help that the song came only a few weeks after Perry won an award from LGBTQ advocacy group the Human Rights Campaign.

While performing her new single "Swish Swish" on Saturday Night Live's most recent season finale, Perry was joined by a collection of New York City drag queens. Though reports emerged that some drag queens had been cut from a different number during the broadcast because Migos did not want to perform alongside them, the queens defended Perry and refuted those claims.

"How dare anyone try to overshadow this incredible moment with some drama," Alotta McGriddles, one of the queens who performed, wrote on Facebook. "Thank you Katy Perry for booking this queen and bringing us all together. You are a true professional and in a world where meeting your idols can sometimes ruin the fantasy, you delivered, all the way."

While taking part in a three-day long livestream event in support of Witness, Perry sat down with Black Lives Matter activist DeRay Mckesson to discuss some of her biggest moments in cultural appropriation. During the session, she admitted some of her mistakes — the geisha costume, saying she wasn't a feminist and wearing her hair in cornrows — and said she was grateful for friends who took her aside and educated her.

"I listened and I heard and I didn't know," she said. "I won't ever understand some of those things because of who I am. I will never understand, but I can educate myself and that's what I'm trying to do along the way."

She added, "I've been so grateful to have great teachers and great friends that will really hold me accountable."