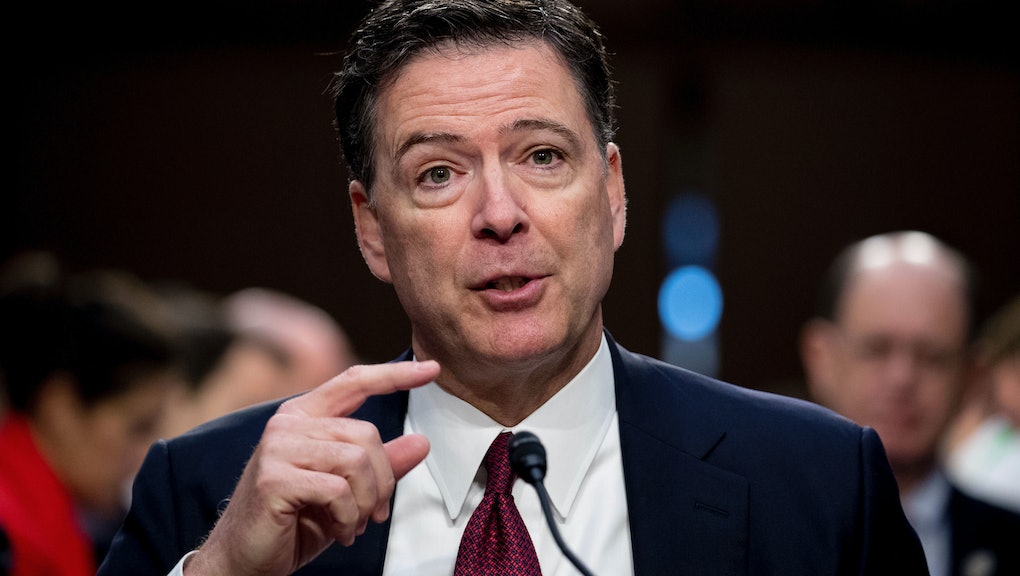 James Comey Testimony: The 6 key takeaways from the hearing on Trump and Russia

2. Comey said Trump pressured him to not investigate national security adviser Michael Flynn. As Trump asked other top officials to leave him alone with Comey, the former FBI director told the committee he was thinking, "I knew something was about to happen I needed to pay very close attention to. ... Why would you kick everybody out of the Oval Office?"

3. He refused to say whether he believed Trump obstructed justice. Comey took Trump's "Let it go" comment about the Flynn investigation "as a direction." Comey highlighted that Trump's comment came the day after Flynn was fired. He also revealed, for the first time, that Flynn was under criminal investigation. The former FBI director also said Robert Mueller, the special counsel investigating alleged Trump-Russia ties, will look into possible obstruction by the president.

4. Comey tried to force the creation of a special counsel. He told the committee that he directed a Columbia Law School professor to leak the contents of his memos to a journalist to raise the chances that a special counsel would be appointed. Mic confirmed this account.

5. The testimony was personal. Because of "the person" he was speaking with, Comey said he felt compelled to take notes after any conversation with Trump. He had not done that with two previous presidents. "I was honestly concerned he might lie about the nature of the meeting," Comey told the committee. "I was so stunned by the conversation that I just took it in."

6. Trump never asked about or tried to intervene in other FBI investigations. While stating the FBI runs thousands of inquiries simultaneously, Comey said the Flynn investigation was the only one Trump took a particular interest in. The statement was revealing because it demonstrated the president was focused solely on the Flynn inquiry.

Remember: Comey made these statements under oath. The longtime prosecutor and legal savant would face a charge of perjury if he lied.

This is Mic's daily read on Donald Trump's America. James Comey's testimony did not disappoint. This special edition of Navigating Trump's America details the new information and statements Comey made about his interactions with President Donald Trump. Read a blow-by-blow of the hearing here.

The larger point: "(Russians) think this great experiment of ours is a threat to them. ... We remain that shining city on a hill, and they don't like it." That was Comey's assessment of why Russian hacking is so important for America and democracy.

Comey did not read his written testimony, but gave a stunning opening statement where he called Trump a liar and questioned the motivation for his firing. Comey said: "The administration chose to say the (FBI) was in disarray ... Those were lies. Plain and simple."

"To my former colleagues at the FBI, I am so sorry I didn't get the chance to say goodbye to you," Comey said. "The FBI is honest. The FBI is strong. The FBI will be independent."

Comey said Mueller did not review his testimony. He added he has no doubt Russia was behind hacking to influence the election but was confident no votes were changed.

The dossier. Comey would not say — in a public setting — whether any criminal allegations against Trump in the dossier released before the inauguration have been substantiated.

"Lordy, I hope there are tapes." Comey said he has seen Trump's tweets and hopes recordings of their conversations come out.

Comey raised a question around why Attorney General Jeff Sessions was involved in the former FBI director's firing — given Sessions' recusal from the Russia investigation.

Republican senators repeatedly pressured Comey on his lack of response to Trump's request. Comey said he was so "stunned" by what he saw as Trump's ask to end the investigation into Flynn that he did not think to tell Trump his comment was inappropriate.

Comey said there have been "many" news stories about the Russia investigation wrongly reporting classified information.

The president did not tweet. At an event in Washington simultaneous to Comey's testimony, Trump did not mention the former FBI director by name. But he did say "as you know, we're under siege" but "will come out bigger and stronger and better."

The committee is holding a closed session at 1 p.m. Thursday to ask Comey further questions.

Comey's public testimony will likely lead senators to seek new information. They will also redouble efforts to obtain his FBI memos — which Comey stated clearly are not classified.

The investigation is continuing. Both the House and Senate intelligence committees are seeking documents and testimony from Flynn and Michael Cohen, Trump's longtime attorney. Intelligence chairman Sen. Richard Burr (R-N.C.) said after the hearing that he would work with Mueller to make sure the Senate investigation does not conflict with the House's.

One more thing: The House may repeal consumer protections

Amid the focus on Comey, the House may quietly vote on the Financial Choice Act. That bill would unwind many provisions in the Dodd-Frank Wall Street Reform and Consumer Protection Act. Dodd-Frank set up a process for winding down "Too Big to Fail" banks, and set up the Consumer Financial Protection Bureau, which has since returned some $12 billion to victims of misleading marketing and financial scams. If the GOP bill passed, the "too big to fail" provisions would be scrapped entirely, and the CFPB would lose most of its powers.