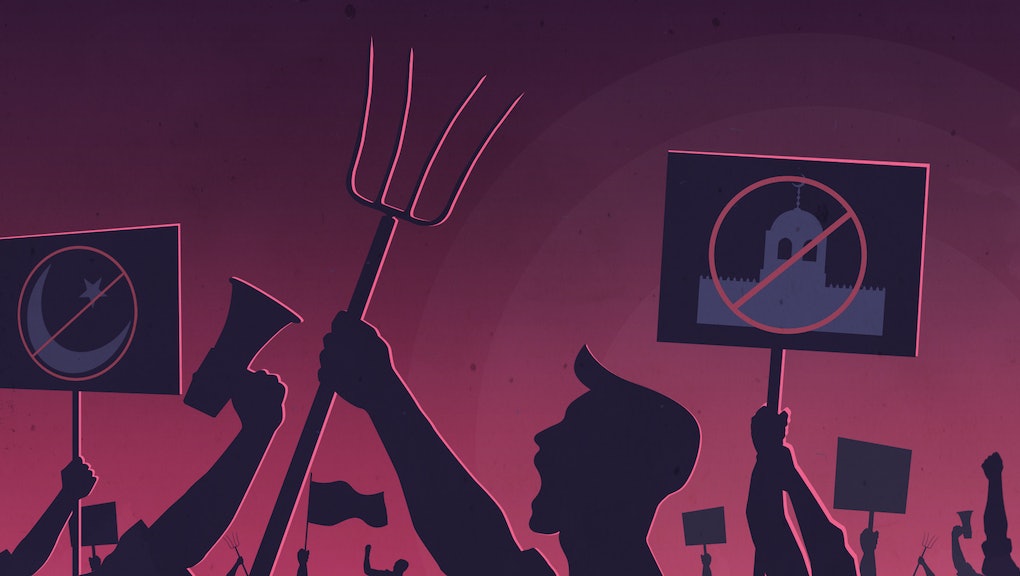 ACT for America is set to host "March Against Sharia" demonstrations Saturday in 28 cities in 20 states. With about 300,000 members and 1,000 chapters across the country, ACT is the "largest grassroots anti-Muslim group" in the nation, according to the Southern Poverty Law Center.

Sharia law is a set of complex and diverse principles Muslims follow to live their daily lives. These principles are based off interpretations from the Quran and the Hadiths, which are oral accounts of Prophet Muhammad's life, and provide guidance on issues pertaining to inheritance, financial transactions, dietary requirements, legal proceedings and marriage ceremonies. But far-right groups like ACT have made a fortune and lobbied state and federal lawmakers to propose anti-Sharia legislation.

"That's what ACT does," Corey Saylor, director of the Council of American Islamic-Relations' department that monitors Islamophobia, said in a phone interview. "They try to trick people who aren’t familiar with the issues with conspiracy theories about Sharia law creeping into the country."

The belief that Sharia law is infiltrating the United States is a tactic the far-right has used to instill a fear against Muslims among those who aren't familiar with Islam and to push forward Islamophobic policies. For example, in July, former 2012 presidential candidate Newt Gingrich said that any Muslim who believes in Sharia should be deported. Other anti-Muslim figures like conservative radio show host Mark Levin have claimed Sharia law has already creeped into the country, claiming that "free speech under attack. Non-Islamic religions under attack, in many respects. You can see the gays under attack.”

For a rally broadcasted as a march "for human rights" and one that seemingly touts the empowerment of women and minorities, its organizers and headliners do not. Instead, Saturday's anti-Sharia demonstrations bear all the qualities of events organized by noted misogynists, militiamen and white nationalist groups.

Who is behind ACT for America?

Heidi Beirich, director of the SPLC's Intelligence Project, said in a phone interview that ACT is full of "hypocrites."

"They're pitching this [anti-Sharia march] as upholding liberal values, protecting women from female genital mutilation, and protecting women's rights, and yet they have beliefs that are as retrograde as anything the harshest Sharia law could possibly have," she said.

Brigitte Gabriel, leader and founder of ACT, has garnered an immense following for saying that Sharia law has seeped into the country, empowering Muslims to abuse women and suppress the free speech of all Americans. Gabriel has said "every practicing Muslim is a radical Muslim," or that Muslims have an inherent hatred for Jews and Christians.

Former national security adviser Gen. Michael Flynn, who resigned following reports he communicated with the Russian government before Donald Trump's inauguration, is listed as a member of ACT's board of directors. He is also a noted Islamophobe.

How are they growing?

Neo-Nazis have been actively recruiting people online to help organize and attend Saturday's demonstrations. For example, neo-Nazi group White Lives Matter is using the Daily Stormer (a popular neo-Nazi website) to recruit white nationalists to organize and join the anti-Sharia rally in Austin, Texas, according to SPLC. In Batesville, Arkansas, longtime neo-Nazi Billy Roper volunteered to organize the anti-Sharia rally. Roper, founder of the white nationalist group National Alliance, wrote an email to his members immediately after 9/11 praising al-Qaida for hitting the Twin Towers in New York City.

On Tuesday, ACT released a statement canceling their protest in Batesville because of Roper's involvement with white supremacist groups. But despite their condemnation of Roper, civil rights experts remain unmoved.

"They are willing to denounce somebody who calls for the extermination of Jews when they say the same thing Nazi Germany said about Jews with Muslims," SPLC's Beirich said. "Why is [ACT] acting surprised? Why aren't they screening people out? What about the other extreme groups attending and speaking at your rallies?"

While ACT may have disavowed Roper, their Batesville chapter leader Charlie Fuqua has made headlines for his intentions to have his Christian beliefs as the "political solution" for all of the country's issues.

In 2012, when Fuqua ran for office, his book titled God's Law: The Only Political Solution sparked outrage for his extremist beliefs. In the book, he wrote that all Muslims should be expelled from the United States. He also wrote that all prisoners who could not be rehabilitated within two years should be executed. Fuqua also seemingly endorsed stoning children to death as a suitable punishment for disobeying parents.

Here's the excerpt from his book where he advocates for stoning:

"The maintenance of civil order in society rests on the foundation of family discipline. Therefore, a child who disrespects his parents must be permanently removed from society in a way that gives an example to all other children of the importance of respect for parents. The death penalty for rebellious children is not something to be taken lightly. The guidelines for administering the death penalty to rebellious children are given in [Deuteronomy] 21:18-21."

You can read Deuteronomy 21:18-21 from the Kings James version of the bible here.

Who will be at the "March Against Sharia" rallies?

ACT is also inviting violent white nationalists and armed militia groups to headline their events. On Monday, the Oath Keepers posted a call to action to its members. The anti-government militia group said ACT has asked their armed militiamen to "provide security" for their anti-Sharia rallies across the country. Oath Keepers, notorious for their armed defense of white-owned businesses during protests in Ferguson, Missouri, following the police killing of Michael Brown, are expected to make their appearance at the New York City demonstration. The New York City demonstration is expected to be the biggest and most well-organized protest. Frank Morganthaler, the vice president of the Oath Keepers' New York chapter, is slated to headline the event alongside white supremacist Gavin McInnes.

McInnes, a co-founder of Vice who left the media company in 2008, is also the leader of the Proud Boys. According to Beirich, the Proud Boys serve more as a "juvenile fight club" than a mostly white conservative fraternal organization.

ACT invited McInnes as one of its headline speakers for their NYC demonstration to stand up for "human rights" and women's empowerment. But in the past, he has blamed women for domestic violence and engaged in an anti-Semitic rant in his “10 Things I Hate About Jews" YouTube video. McInnes has also been on the record for saying women should stay at home and earn less, because that's how "God intended" it to be.

The numerous affiliations, associations and collaborations with neo-Nazis, right-wing militia groups, anti-Semites and Christian fundamentalists seem to hinder ACT's advertised mission to promote human rights and American freedoms. Beirich said its agenda is clear: They've been trying to portray Sharia as this "secret creepy virus affecting our society," to stir up an anti-Muslim animus in the country.

Mic reached out to organizers of the March Against Sharia events but did not receive comment.