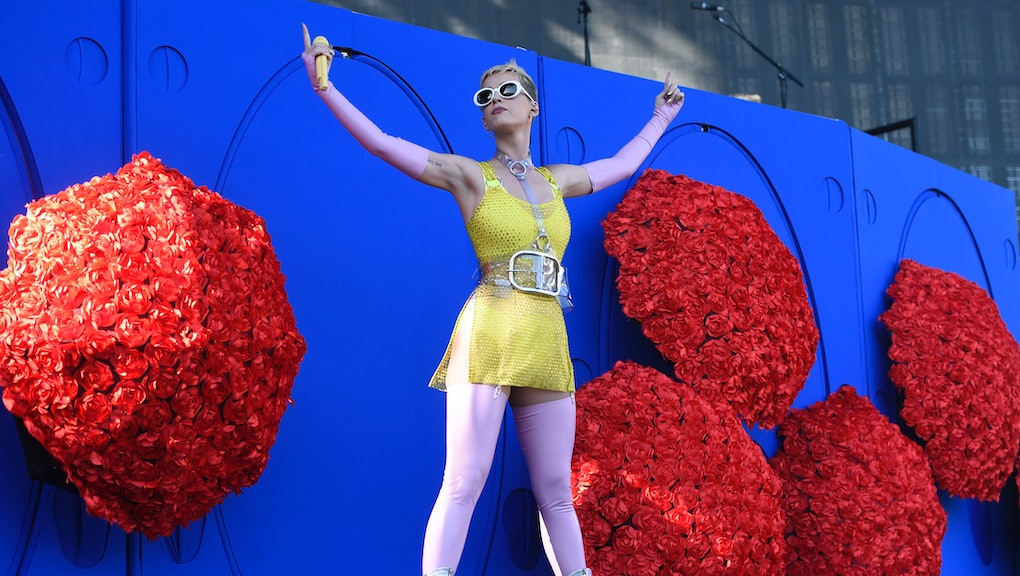 Katy Perry is livestreaming her 'Witness' release weekend ... why, though?

Katy Perry's Witness album rollout has been a struggle in many ways. Nearly every colorful, cheeky promotional stunt has found a way to blow up in her face — such as her Instagram Live feed where she attempted to clap back at a commenter for mocking her new haircut and incidentally compared it to the dawning of the Trump administration. There was also her painfully awkward Saturday Night Live performance with Migos, which also drew criticism for appropriating drag queen culture.

The Friday release of Witness initially felt like a touch of mercy for fans: We can stop the stunts and just get back to the music. But no, the gimmicks continue.

Late Thursday night, hours away from her album drop, Perry opened up her "Live: Witness World Wide Web," a livestream that will follow her throughout the weekend, like she's on her own episode of Big Brother.

This includes sleeping, so if you've ever wanted to witness what a multiplatinum pop star looks like when she sleeps, consider yourself the luckiest peeping tom in the world.

The livestream was a bit more interesting Thursday night. She recorded an intimate show where she played new music, showed off her guitar chops and took questions from fans, discussing inspiration for her new era of music.

That's ostensibly what fans will witness on the livestream this weekend as she stays in this house, the walls of which one artist is currently painting with a giant picture of Perry's face. She'll also "be hanging with friends, talking meditation and previewing her new music," according to ET Online — as well as sleeping, and most likely eating a meal or two.

Will she brush her teeth? If Katy Perry brushes her teeth and no one is there to witness it, did her teeth get brushed at all? Does it matter?

All these questions and more will be answered this weekend by following the hashtag #KPWWW.