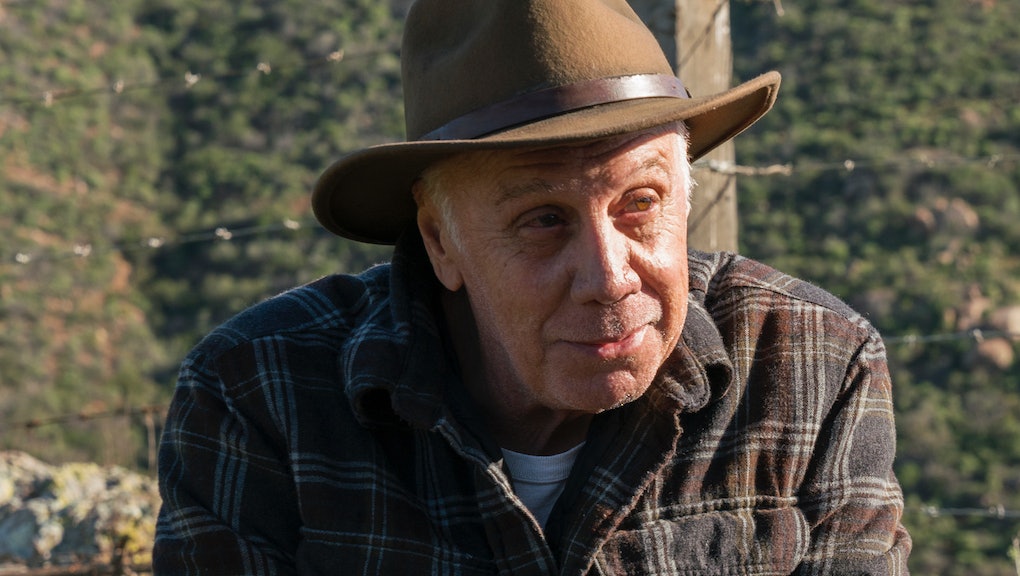 Welcome to the Broke Jaw Ranch — home to a community of doomsday preppers!

That's right, the beautiful San Diego ranch belonging to the Otto family might actually be the safest location that Fear the Walking Dead — or The Walking Dead — has ever introduced. Ranch owner Jeremiah Otto knows how to survive. From recycling water, growing crops and raising livestock, the people living at the Broke Jaw Ranch may have the best odds at survival. Of course, they still have to worry about Jeremiah's loose cannon son, Troy. Oh, and there's the pesky fact that someone outside of the camp shot down their helicopter and killed Travis.

Episode three of Fear the Walking Dead opens with a grainy video giving insight on the Otto family. When Jeremiah's sons Jake and Troy were young children, Jeremiah began selling a VHS set on how to survive when the end of the world comes. "If you're going to plan for a future, plan for a better one" is his motto.

It's not exactly clear if he was successful in selling his doomsday kits, but people certainly are following him now.

The history behind Broke Jaw Ranch

Most of episode three takes place within the Broke Jaw Ranch. Madison is determined to stay at the compound with her family and willing to do whatever it takes to do so. No one said it was going to be easy though. The people there blame them for the death of Charlene, the helicopter pilot who was eaten by walkers in episode two. And then there is Troy, who has become obsessed with Nick.

A threat from Troy leads Madison straight to Jeremiah. She wants the Broke Jaw Ranch leader to keep his son in check. But Madison doesn't have much leverage. She's in his territory and started off on the wrong foot with people at camp.

Jeremiah sees Madison as stubborn, but he's willing to give her the tools necessary to succeed. He gets Jake to set her up with the first tape in his doomsday survival series. Madison doesn't get far though. After turning off the tape part way through, Madison sets her eyes on another VHS in the room. The tape is an outtake of the commercial for Jeremiah's doomsday kit. Gone is the confident man and his perfect family who want to provide their tips for survival. Instead Madison discovers that Jeremiah's wife was an alcoholic and that he was an abusive, angry man.

Jeremiah discovers Madison watching the tape, but he's not angry with her. Instead he calmly explains that he's a different man now. The woman in the video was his second wife and Troy's mom. She died from alcoholism before the apocalypse and it was Troy who took care of her at the end. Madison begins to understand why Troy is the way he is. That doesn't necessarily mean that she trusts him or wants to give him a second chance, but the wheels are turning as to how she can manipulate him. She even volunteers to go on an expedition being led by Troy to search for a group that never returned.

The return of a familiar face

Where in the world is Strand going after the hotel? With the roof down on his new convertible, Strand is heading straight for an old friend named Dante. Unfortunately for him, Dante's men aren't exactly welcoming. Dante appears to have control of a dam and every day his men deal with a long line of people desperate for water. The people trade different things in the hopes of getting a couple of liters. Strand cruises right up to the front of the line, but even in the zombie apocalypse there is a no cutting rule. The men are about the kill him when the mysterious Dante appears.

Strand's life is saved and it's revealed that Dante is an old business partner who also worked with Strand's partner, Thomas. The two toss back a drink and reminisce about old times. But Strand hasn't found a safe haven. Dante brings him out to the dam to watch his men throw a former cartel member to his death. The man is tossed from the dam and falls onto a large pile of walkers. It's a gruesome death. The cartel member survives the fall — presumably with some broken bones — and then is eaten alive. And unfortunately for Strand, he's next.

"Did you truly think we were friends?" Dante asks Strand as his men hold him dangerously close to the edge.

Ever the smooth talker, Strand is ready to bargain for his life. He tells Dante that he needs him and that he can help organize his men to prepare for an attack on the dam. After all, water is the currency now. But it appears that Dante knows Strand very well. He accuses Strand of stealing from Thomas — something that Strand doesn't deny — and of never loving Thomas to begin with. Strand does deny that last accusation, but Dante doesn't want to hear it.

"You exploit everything that you touch," he tells Strand. Dante doesn't kill him, though. He warns Strand that he owes a debt and will work it off.

Strand is tossed in a cell with his fate unknown. But that's not the big jaw dropper of episode three. Sunday night's installment concludes with Daniel — yes, the same Daniel who viewers presumed died in a fire at Thomas' compound in season two — bringing Strand a canteen of water.

"I told you I'd be your guardian angel," Daniel says.

Other important things to note from episode three

— The writing is on the wall that Troy is going to kill Jake. The youngest Otto son is so twisted that every decision not to kill him puts another survivor at risk.

— Speaking of trying to kill Troy, Nick does just that. While out on a boar hunt at night, Nick jumps Troy from behind and almost shoots him in the head. He misses on purpose but then laughs hysterically as he rips apart Troy's hand-written accounts of his "experiments." Don't fear for Nick's life, though. The strange encounter between the two actually brings them closer together. "I think were going to be friends now," Troy tells him.

— Alicia is not the same girl we met in season one. Being out in the zombie apocalypse has hardened her. When she joins a group of people her age for "bible study," which is their code name for smoking weed and tossing back some shots, she opens up about killing a man. When they ask her how it felt, Alicia gives a cold answer: "easy."

Fear the Walking Dead airs on AMC on Sundays at 9 p.m. Eastern.