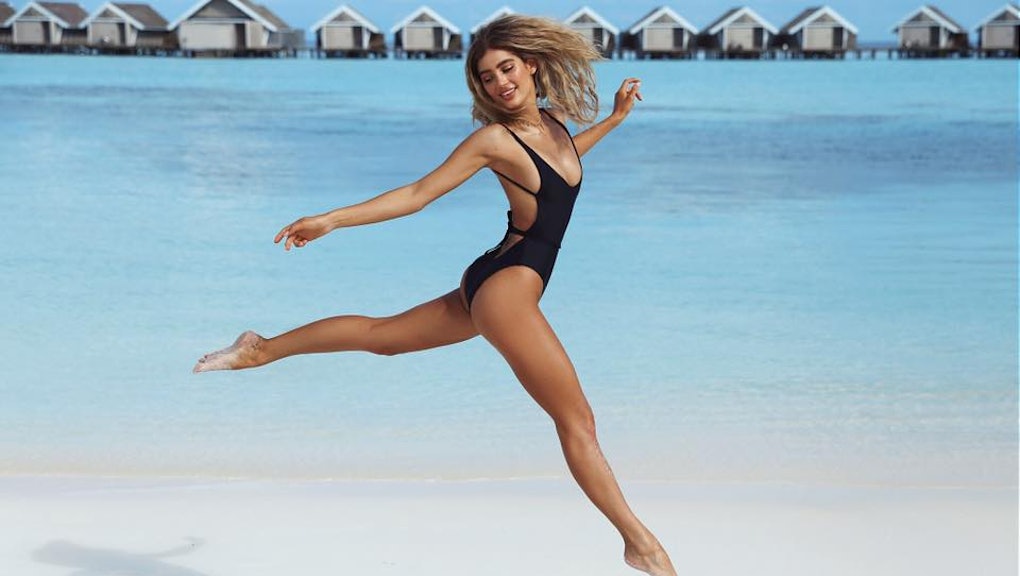 Swimwear, like lingerie, is one of those things that is almost always photographed on a model with a so-called "perfect" body, with no cellulite, no lumps or bumps or hair and certainly no stretch marks.

A new swimwear line, Rheya Swim, is quietly changing that.

On its website, the models are indeed thin and svelte and hairless, but stretch marks are in full display. Turns out, this didn't happen by chance. The founder had to fight for it, because as the model herself, she knew what her body looked like.

"It was intentional," Chloe Madison, the founder and designer of Rheya Swim, told Elle. "When we got back photos from retouching it was shocking. I didn't really recognize my body — enhanced to someone else's idealistic version of it. I sent it back and asked for all of that [retouching] to be stripped off and it made me feel better about it."

In addition to the stretch marks, the skin isn't completely airbrushed either, with noticeable blotchiness.

"There was a level of insecurity over the stretch marks and 'blotchy skin,'" Madison told Elle. "I thought, I wonder if people are going to notice and compare it to other sites where models look completely flawless? But, ultimately I thought it was the right way to go."

Talking about and showing off stretch marks are one of those things that's inching toward the mainstream right now. In the Sports Illustrated Swimsuit Issue this year, for example, there was an ad featuring Denise Bidot, and the stretch marks on her stomach were on full display. Kendrick Lamar has rapped about them, Chrissy Teigen has showed them off and they've even appeared in Target swim campaigns.

With up-and-coming brands particularly like Rheya, with a young designer and founder who's just 21 years old at its helm, it's a positive sign for the future. If these young designers already get it, then maybe the future of fashion will be more inclusive when it comes to showcasing bodies and their many completely natural features.

"[Shoppers] see super photoshopped girls and think that's something they need to be and I didn't really want to celebrate that anymore," Madison told Elle. "I would rather purchase something I could relate to and I could see myself in as opposed to someone that doesn't even look like a real person."